Erdogan’s Russia visit to boost ties and leverage the West 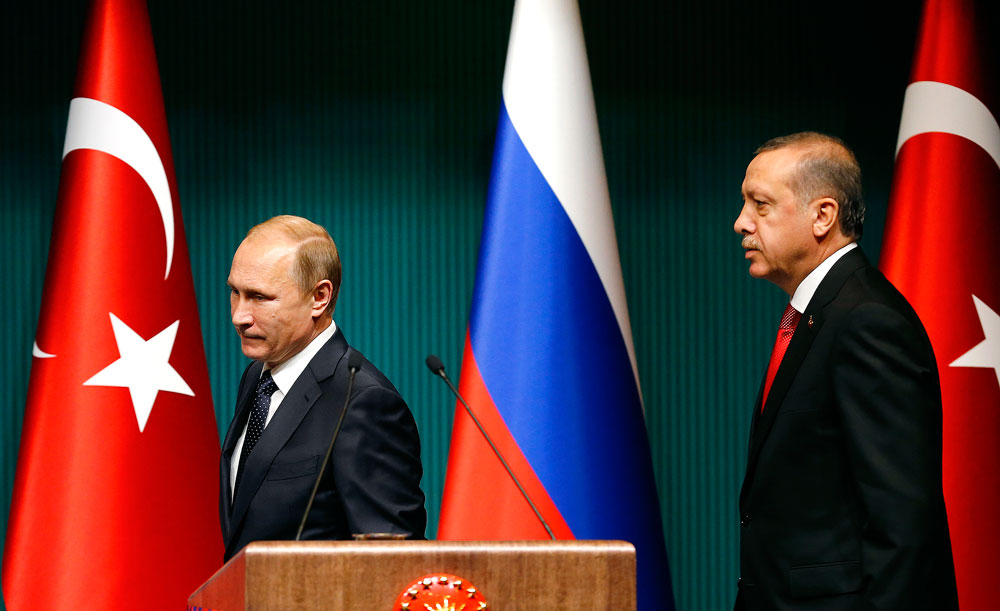 Reuters
The conflict with the West is pushing Ankara closer to Moscow. With Turkey’s President Erdogan visiting St. Petersburg for a meeting with the Russian President, both leaders are aiming to extract maximum political mileage from the visit.

Relations between Ankara and the West have dramatically unraveled ahead of the August 9 summit level meeting between Russia and Turkey. Turkish President Recep Tayyip Erdogan extremely harshly thwarted European Union representatives' attempts to raise the issue of human rights violations in Turkey after the failed coup was suppressed.

Turkey’s Foreign Minister Mevlüt Çavuşoğlu gave Brussels an ultimatum: if the EU does not present Ankara with a visa-free travel regime by the middle of October, the refugee agreement may be abandoned. Turkish officials also accused Washington of supporting Turkish preacher Fethullah Gulen, who lives in the US and is considered the organizer of the coup. Given the rising confrontation with the West, the Turkish leader is trying to play the Russian card to weaken pressure from the US and the EU, and avoid external isolation. But Moscow is also playing its own card: by restoring relations with Ankara, it gets a new lever to influence the situation in West Asia and other strategically important regions, and it shakes up the Western anti-Russia coalition.

Erdogan's visit to St. Petersburg will practically mean his return to the international arena. After the failed coup on July 15, leaders of key Western countries not only did not meet him, but almost refused to speak with him on the phone. Additionally, external pressure on Ankara to prevent any further political repressions is growing daily.

Moscow's reaction to the recent events in Turkey is, however, significantly different from the positions manifested by most Western countries and the UN. Moscow is refraining from any criticism of the Turkish government that could be interpreted as a "lesson in democracy."

In this situation, Erdogan's attempt to play the Russian card in his confrontation with the West is not only natural but practically inevitable.

The Turkish government claims that renewal of top-level contacts with Russia while dialogue with the West is rapidly decreasing should not be viewed as a sudden change of foreign policy priorities for Ankara. In an interview with CNN Turk Çavuşoğlu said, "There are those who are worried by our normalization of ties with Russia. Our relations with Moscow are not an alternative to relations with NATO or the EU."

However, analysts from the Kommersant newspaper believe that Erdogan can very well use his relations with Russia to achieve the most crucial objective for Turkey's foreign policy today: reducing the pressure from the Americans and Europeans and avoiding international isolation.

"Although there will be no radical change in relations between Moscow and Ankara, President Erdogan is actively trying to play the Russia card. It is extremely important for him to obtain guarantees that during the G20 Summit in China in September, he will not become an outcast. This is one of the reasons for his upcoming visit to St. Petersburg," explained Andrei Fedorov, former Russian Deputy Foreign Minister and director of the Centre for Political Studies.

The second reason for Ankara's rapprochement with Moscow is the suspended issue of Turkey's future relations with the EU. "The implementation of the refugee agreement is extremely important for Europe, which is shocked by the inflows of immigrants. This is why Erdogan's blackmail may work in certain conditions. But in the event the Turkish government introduces the death penalty, Europe will be forced to tear up the agreements with Ankara," said Fedorov. "Then relations with Russia, which will not react so harshly to Turkey introducing the death penalty, will become a compensation mechanism for Ankara."

"President Erdogan's game is completely foreseeable. He has found himself isolated from his Western allies, even though Turkey does not intend to break off relations with NATO or the EU," notes Victor Nadein-Raevsky, senior scientific collaborator at the RAS Institute of World Economy and International Relations. "The Turkish leader needs an instrument for pressuring his allies and Russia is perfect for this. Especially since it is impossible to wage war simultaneously on several fronts; with the West, with Russia and in the Middle East," he said.

For pragmatic reasons, Moscow also needs Ankara; both in Syria, where Turkey's position is still very influential, and in the Caucasus, as well as in the energy sphere. For Russia the revival of the Turkish Stream project can become a lever to pressurize the EU administration, which is not hurrying to launch the Nord Stream-2 project, a project that is strategically important for Moscow.

"The new rapprochement with Ankara gives the Kremlin a new instrument for influencing the situation in the Middle East and in other strategically significant regions, and it destabilizes the Western coalition against Russia," explained Vladimir Sotnikov, director of the Russia-East-West Centre for Strategic Studies and Analysis.