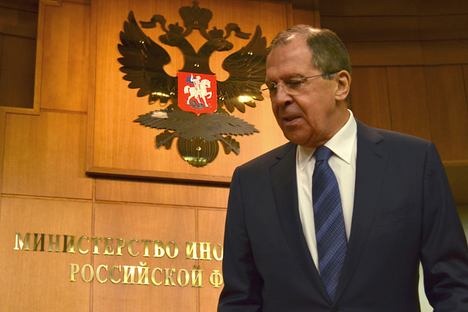 Flick.com / MFA Russia
Moscow is convinced that Syria’s opposition should distance itself from the Islamic State and Al-Nusra terrorist groups (both banned in Russia), Foreign Minister Sergey Lavrov said on Monday following talks with his German counterpart Frank-Walter Steinmeier.

"We believe that it is still necessary not to allow international terrorist entities to prevail here and to ensure the beginning of genuine and true negotiations between all Syrian sides," Lavrov said.

This envisages strengthening the ceasefire regime and solving humanitarian problems in many parts of Syria, including in Aleppo, Lavrov said.

"We told our German friends about the steps that we are taking in contacts with the United States. We are convinced that a key goal is distancing the moderate opposition from the IS and Jabhat Al-Nusra," he stressed. "It’s alarming that many so-called moderate opposition members more often coordinate their actions with these terrorists."

The sides also discussed the situation in Aleppo, he said. "We hope that with the participation of Russia and the US, other Western countries and countries of the region, and the UN we will be able to improve the situation of the civilian population and not allow militants to dictate their conditions," he stressed.

According to the Russian top diplomat, there are great risks for airlifting humanitarian aid to Aleppo, it is important to make sure that it does not end up in the hands of terrorists.

"The situation in Aleppo is changing all the time," the minister said. "We see very big risks (for airlifting humanitarian cargo - TASS), that it is not always possible - due to weather conditions or changing configuration on the gound - to deliver this cargo to those it is meant for rather than to terrorists."

"While solving humanitarian problems, it is important to make sure that terrorists do not get reinforcements in terms of weapons, gunmen and ammunition under the guise of humanitarian aid," Lavrov said.

"Those who want to deliver such cargo, need to coordinate this, above all, with the Syrian government," the minister said. He added that Russia would "coordinate its steps with the UN" in the issue of humanitarian aid delivery.

Three-hour pauses in battles near Syria’s Aleppo are insufficient

The minister went on to say that three-hour pauses in battles near Syria’s Aleppo are insufficient but for lengthier truce the issues of the fight against terrorists have to be resolved.

"Three-hour pauses a day are insufficient," Lavrov said. "But to make them lengthy, it is necessary to deal with the issues of the fight against terrorists," the Russian foreign minister said.

In the past, Russia and the United States were able to reach agreements and announce a truce regime for 48 and even for 72 hours, Lavrov said.

"As a result of these pauses, the humanitarian situation has been slightly eased," the Russian foreign minister said.

"But their main result is that the terrorists’ ranks have been replenished with 7,000 fighters, to say nothing about a large number of ammunition and weapons," the Russian foreign minister said.

Germany’s Foreign Minister Frank-Walter Steinmeier said in his turn that three-hour pauses in hostilities near Aleppo are not enough to arrange for reliable and steady delivery of humanitarian assistance to civilians in the city.

"The people of Aleppo are experiencing a real humanitarian disaster," he said. "The city is subjected to continued bombardments. It cannot go on like this anymore. We must have a permanent humanitarian corridor to bring essentials to the people. Three hour truces are not enough for that. We must support efforts by the United Nations, Russia and the United States for the creation of such corridors."

The chief German diplomat pointed to Lavrov’s statement Turkey was prepared for cooperation in addressing this task and welcomed consultations between Russia and the United States over delivering humanitarian aid to Aleppo along the Castello route.

"A road is more reliable than an air bridge," he said, adding that the United Nations was prepared to service such a corridor by exercising control at special checkpoints.

"It is crucial to rule out weapons deliveries disguised as humanitarian supplies," Steinmeier said.

Lavrov has also stressed that Ankara was aware of the need to take extra measures of implementing monitoring at two key checkpoints of the Turkish-Syrian border.

Lavrov reminded that resolution 2165 of the UN Security Council envisages monitoring by the international community at these two checkpoints: one of them is operating and another one is still closed. "We have understanding with the Turkish side that there is the need to take additional measures so that this resolution is fully and efficiently implemented," he said.

"This concerns opening the second checkpoint and the intensity of monitoring by the international community that is ensured at each of these checkpoints. I think this will really help," Lavrov said.

Lavrov said it is impossible to check all the cargos, but this control could be implemented selectively in order to guarantee that "the humanitarian regime of this route is not violated."