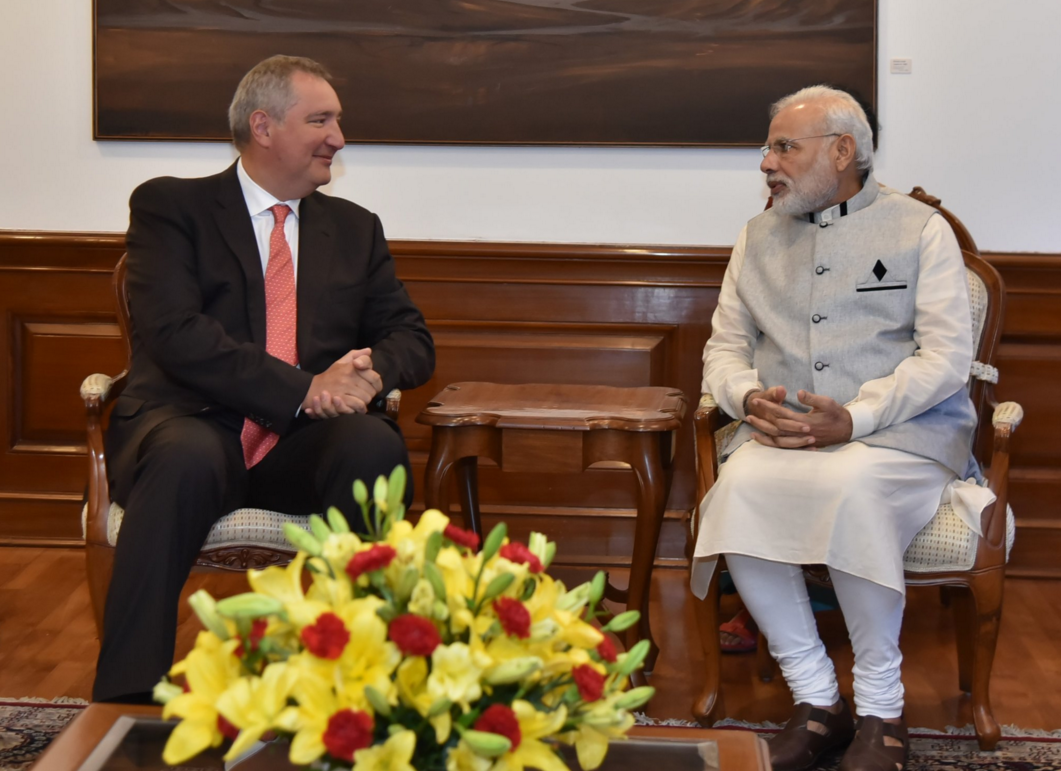 Dmitry Rogozin and Narendra Modi in New Delhi on August 20, 2016.

twitter.com/VikasSwarup
With the forthcoming G-20 and BRICS summits due in September and October respectively, Russian Deputy Prime Minister Dmitry Rogozin visited New Delhi to meet with Prime Minister Narendra Modi on Saturday and discuss and finalise positions on bilateral and global issues, including Syria.

Dmitry Rogozin, Deputy Prime Minister of Russia called on Indian Prime Minister Narendra Modi on Saturday. He conveyed President Vladimir Putin’s greetings to the Prime Minister and briefed him on the progress in ongoing projects between India and Russia, official sources said.

Rogozin’s visit follows the visit of Chinese Foreign Minister Wang Yi to India last week, and is being seen in the context of finalising the agenda for the BRICS summit due to be held in India in October.

Russia is keen to ensure that differences between India and China do not mar the outcome of the forthcoming BRICS summit in Goa and that the momentum from the Ufa summit in Russia in July 2015 is carried forward. India took the chair of BRICS from Russia in 2016.

The Russian presidential envoy’s meeting with the Indian prime minister is significant in that it was also meant to finalise details of President Vladimir Putin’s scheduled visit to India for the annual bilateral summit, a key feature of the “special and privileged strategic relationship” the two countries share.

It is also significant that the Indian Prime Minister’s office (and not the Ministry of External Affairs) announced the meeting with Rogozin, indicating that the Prime Minister is personally monitoring the state of bilateral relations with Russia.

The visit of Rogozin comes close to when the power generation capacity of the second 1,000 MW reactor at the Kudankulam Nuclear Power Plant (KNPP) is being increased for synchronisation with India's national grid.

According to a report in the news agency IANS (Indo-Asian News Service), India's Atomic Energy Regulatory Board gave clearance last week for increasing the power supply from the second unit at KNPP.

"The second unit is currently at the power start-up stage. During this stage, the capacity of Unit 2 will be gradually increased for further synchronisation with the grid," a source told IANS. "A unit is usually connected to the grid at 30 per cent capacity level and synchronisation proceeds on the subsequent attainment of 100 per cent capacity level," the source told IANS. "The second unit might be synchronised with the national grid by August-end," the source added.

Rosatom's Vice-President (Projects) in South Asia Andrey Lebedev had said to IANS over the phone last week that "unit 2 is scheduled for synchronisation with the Southern Grid for August 27-28".

The second unit at Kudankulam went critical last month when the stage of physical start-up was completed successfully, and it is expected to be commissioned later this year.

Modi referred to the event during his meeting with Rogozin, during which he described Russia as a “time-tested and reliable friend and reaffirmed the shared commitment with President Putin to expand, strengthen and deepen bilateral engagement across all domains,” a press release from the Prime Minister’s office said.

The Prime Minister “recalled his recent meeting with President Putin in Tashkent in June and via video-link for dedication of the Kudankulam Nuclear Power Plant Unit 1 at the beginning of this month,” the release stated.

With Russia’s T-50 fifth generation fighter aircraft (FGFA) undergoing advanced trials and getting ready for induction into the Russian Aerospace Forces soon, Rogozin and the Prime Minister discussed increasing bilateral defence collaboration, including on the FGFA and manufacture of the Kamov helicopters and several other projects within the ambit of the ‘Make in India’ programme.

Rogozin is also believed to have briefed Modi about the ongoing Russian assistance to Syrian President Bashar al-Assad’s forces against IS terrorists in that war ravaged country.

M.J. Akbar, India’s Minister of State for External Affairs, just concluded a visit to Syria, becoming the first senior official from India to travel to that country. During Akbar's meeting with President Assad on Saturday, the Syrian leader “welcomed India's objective position on the conflict in Syria,” sources in the Indian government told RIR, and “there was an agreement between both sides for further upgrading security consultations.”.

Both Assad and Akbar “acknowledged that Terrorism was a global problem. Assad said as a growing power, India has a role to play in meeting the challenge of terrorism,” sources in the government said. They spoke of how the “age of destruction should give way to age of reconstruction in Syria and Assad invited India to play an active role in the reconstruction of the Syrian economy,” sources in the government said.