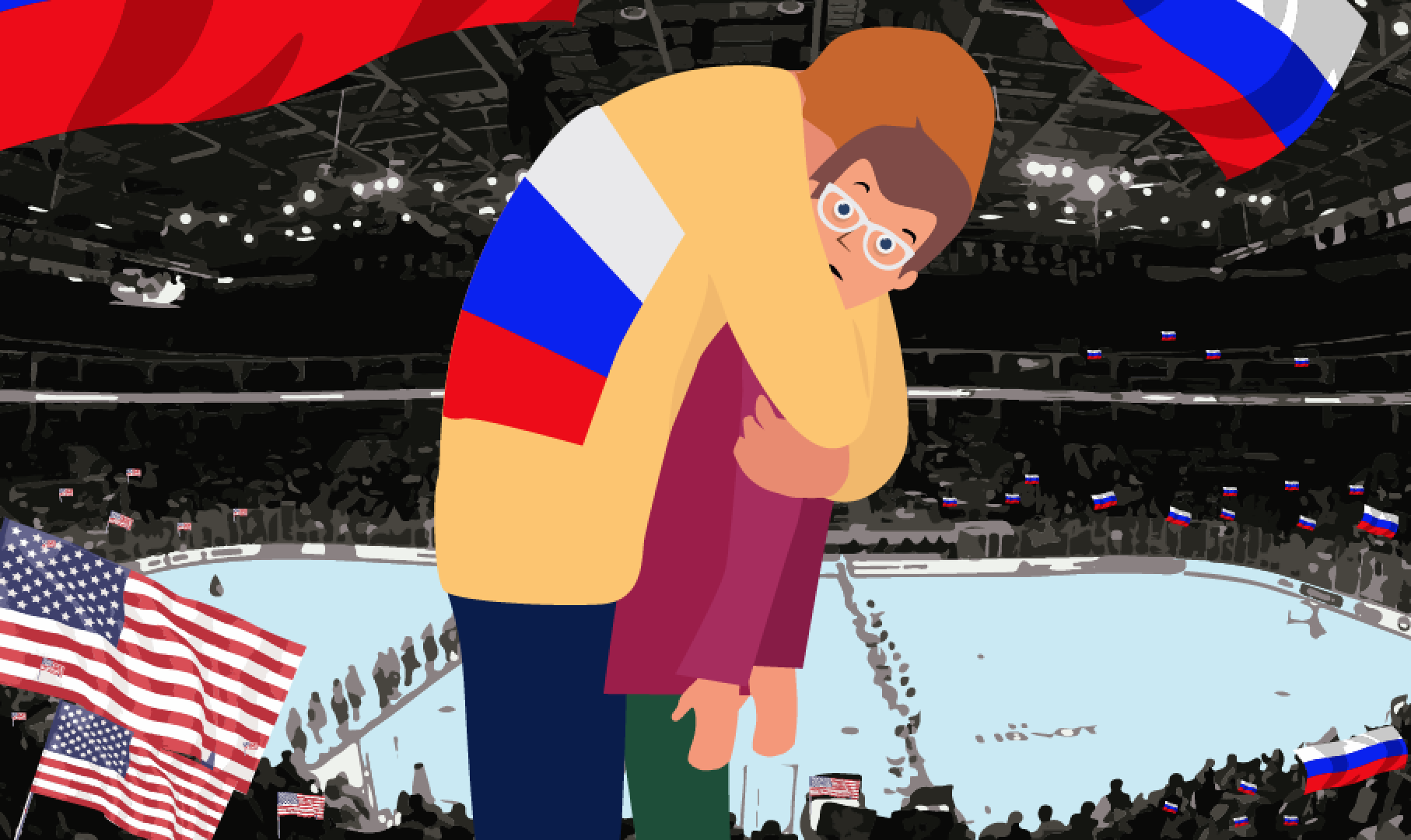 I washed my hands and turned to leave. But the path to the door was blocked by one of the largest human beings I have ever seen.

Alena Repkina
When American student Richard Byington decided to watch the 2014 Winter Olympics hockey showdown between Russia and the United States, it turned out to be not the most comfortable of evenings.

I moved to Arkhangelsk, a Russian city 700 miles north of Moscow, in January 2014. I had spent the past four years of my life at university reading about what Russian culture was. Now I was to learn it firsthand.

I was excited to know that the Winter Olympics would be starting in Sochi a few weeks after I arrived. I could not travel 1,700 miles from the northernmost tip of Russia to its summer beach resort town to watch the Games in person. But my friend Yulia invited me to watch my first sporting event during the Olympics, the Russia vs. United States hockey game.

On the day of the match Yulia, my friend Olof from Sweden and I met outside in the city center. In a move to help me feel a little more comfortable, we had reserved a table at Chesters, a local English-themed bar.

The game started. My emotions were all over the spectrum as I was rooting for my homeland. But I felt uneasy showing it in a bar filled with Russians waving flags, cheering, and singing songs in support for the home team.

The home team. It sounded strange, as if the phrase was being misused. It reminded me that I was not at home, but in another country. A guest. And as a guest, I felt uneasy cheering for the “home” team’s opponent.

I felt alienated. No one was waving the Stars and Stripes chanting “U.S.A!!” like I had grown so accustomed to throughout my life.

The action on the ice was vigorous. Intensity pushed its way through the television with such force that I felt as if I was Sochi watching the game live.

Every goal by the Russians met foundation-shaking cheers. I could feel the wind of Russian flags waving through the air.

A ride on the wild side: A madcap adventure by taxi in St. Petersburg

When the Americans scored it was followed by yells of disagreement and frustration. I had no idea of what the Russian fans were yelling about my countrymen. Only later, when I learned about the Russian Tolstoy never used, I understood they were saying not the nicest of things.

To be honest, I did not believe at the time the U.S. would win this game. However, when they began answering each goal by the Russians with one of their own my national pride surged. Feelings I had when I was back in Michigan rooting for my home team began surfacing.

The thunderous roars and cheers for each Russian goal met the intense sighs and scolding that came with each goal by the American side. It was during a penalty shootout that I’m certain many Russian fans realized that one among them was not just like the others. The one who did not cheer for the Russian goals as loud as the others. The one speaking English.

Everything must have been clicking together for so many people, and I was noticing. My emotions bounced from happiness to pride and from fright to unease as people began staring at me.

The moment of realization came for many more after the United States came out victorious and my friends jokingly took a picture of me kissing the Detroit old English “D” on my baseball cap.

It was then that my friends began realizing the atmosphere around us, just as I had myself. We agreed we should leave promptly. But I had to go to the restroom first.

I washed my hands and turned to leave. But the path to the door was blocked by one of the largest human beings I have ever seen.

I am not small by any means, nearly 6ft. 3in. and 240 pounds. But this man had at least 3-4 inches on me and no less than 50 more pounds. I tried to move around him and he stepped in front of me and blocked my way.

I was slowly coming to realize I was in serious trouble. I had also very little chance of being able to negotiate my way out, mostly because I had almost no knowledge of the Russian language at the time.

The Russian began speaking to me in a deep voice that sounded aggressive. My mind was racing through ways I could escape. And then something totally crazy happened. The giant opened his arms and hugged me.

The hug was more of a shock to my system then a punch at that exact moment. I was so shocked I did not know how to respond at first. Quickly I came to my senses and hugged the man back. He gave me a thumbs-up and let me pass.

The fury was only a joke that luckily ended without a punch. It was only later that I realized I had misinterpreted the meaning behind the man’s tone.

Later, throughout my time in Russia I came across both hugs and threats. I have met people who believed the United States was the worst place on the planet. But I was the American that they would sit with at the bar and share a beer with.

Richard Byington is studying for a master degree in circumpolar history at the Northern (Arctic) Federal University in Arkhangelsk. He has been living in Russia since February 2014.

Read more: Village people: The rural past that unites Russia and Finland>>>