From spare chuckles to open mic: comedy in the city of rare smiles 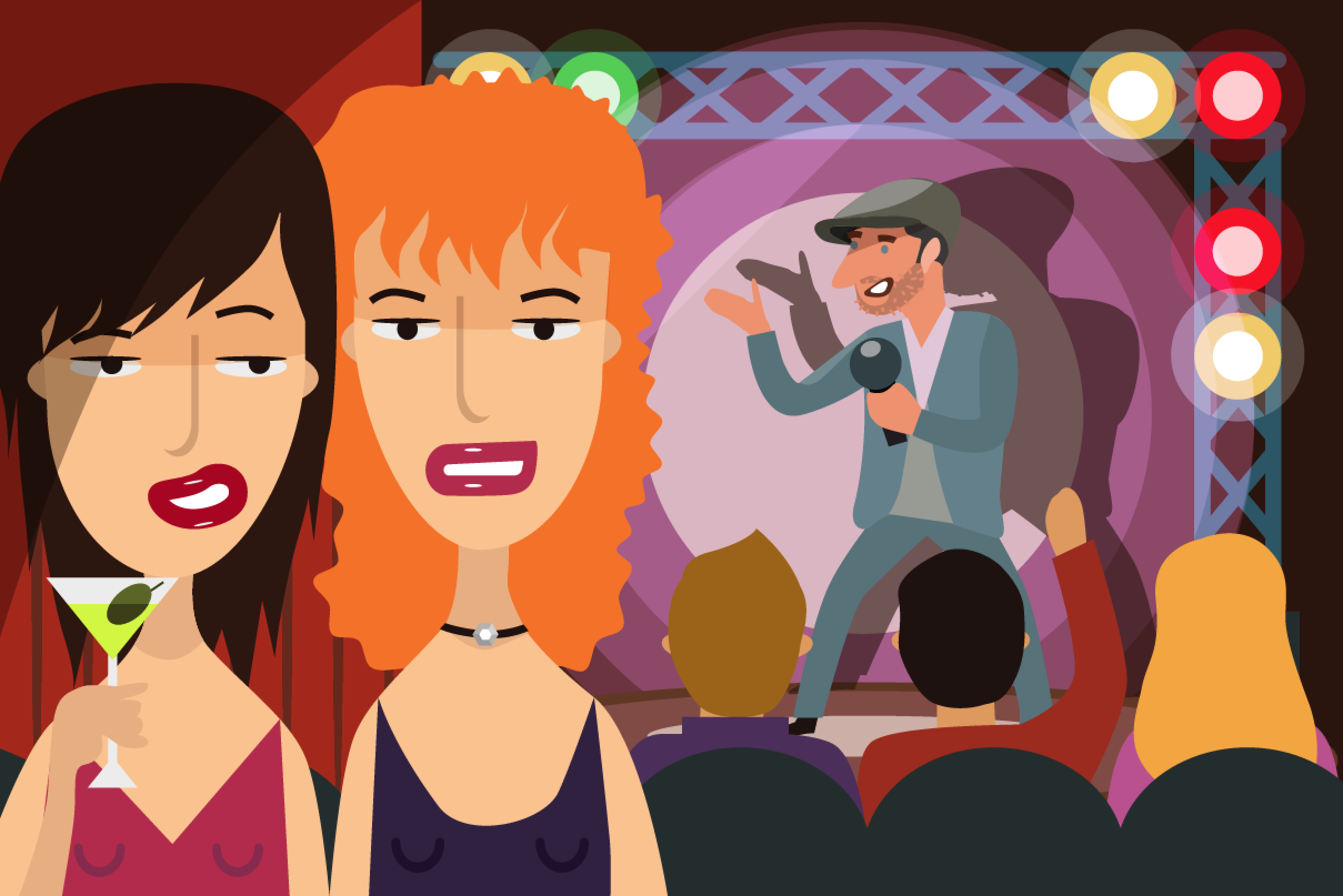 “And are you a comedian?” she asked, with a sideways glance. The last two words were uttered slower, and in that sniffy, dismissive way.

Alena Repkina
Russian and British senses of humor are probably further apart than the north and south poles, but one British comedian living in Moscow has been toiling like a galley slave to overcome the comic divide between the countries.

So tonight was the night. My first ever attempt at stand-up comedy. In Russia. In English. Okay, not ideal. But life seldom is. Everyone has to start somewhere.

I hadn’t been able to eat anything the whole second half of the day, and walking to the venue I could almost hear my nerves jangling like pockets full of burdensome loose change. When I arrived and saw the stage I was sure I’d completely forgotten all the hieroglyphs I’d scrawled on post-it notes and stuck around my apartment.

I prepared for a 5-minute-long set, which doesn’t sound like much, but it was still hundreds of words. All of them needed to be remembered and delivered, naturally and nonchalantly, as though off the top of one’s head; like I was enjoying it. My memory had never been the best - more proto-tragic than photographic. Oh, and it all had to be funny. Specifically funny. Definitely, definitely funny.

My mouth was dry so I immediately started drinking. This is, after all, an evening time pursuit, and in a bar. But this wasn’t the best idea. By the time I hit the stage, there were a fair few slurs caused by my Dutch courage.

I sat in the very corner, waiting to be called, keeping myself to myself. Three student gals decided to perch themselves at the bar next to me; carefree and cocky, seemingly unfazed by the mysteries of the world.

“Are you here for the comedy show?” I asked, a little surprised that English-language comedy in Moscow could attract anyone at all. Maybe they’d come to the wrong place.

“Yes,” came the reply in that Bond girl accent. “And are you a comedian?” she asked, with a sideways glance. The last two words were uttered slower, and in that sniffy, dismissive way. She may as well have crossed her arms, tossed her little nose in the air and declared, “So, you think you’re funny, do you? Well, we’ll see about that…”

I know she was innocently giving me a bit of bitch-shield at the bar, the way millions of girls do every weekend in millions of bars around the world, but this really wasn’t the right time. I was already a dry-mouthed bag of nerves, and I didn’t need any more playful prickling. As Russian girls who came to practice their English they started conversation as much as possible, while all I wanted to do was to be left alone to go over my lines and get this skydive out the way.

I had always been a huge fan of the art form but despite being the class clown and the office joker I never quite thought I was good enough. Those guys on TV, with their polished, peacocking performances, they always looked so bulletproof. How does one go about becoming bulletproof?

I’d been living in Moscow for a few years and heard that there was a group of people doing stand-up in English and I had to go see it to believe it. Were any of them so good or so bad that I would feel that I’d have to take the stage myself? The answer is, of course: both.

“Good evening, my name is Steve, I’m from London. I started out trying to make it as a model. (pause) But I only got one job. That was modelling balaclavas. (pause) That was a tough one to explain on reception in Guantanamo.”

There it was. The first joke I ever wrote - finally released into the universe. And… silence. Total…surrendered…peaceful…silence.

And then, mercifully, a couple of odd guffaws sputtered from the back of the room; though, these were more an acknowledgement of the fact that my joke hadn’t worked, and that I failed. I didn’t want those kinds of laughs. Or did I? But then who was I to pick and choose?

And so began this wonderful journey, one that has led me to performing at Edinburgh Fringe and back home in London. It’s led me to musical comedy sets and acting work as well as a weekly radio show and comedy podcast with regular listeners now in over 40 countries.

At the start of 2017 I also hosted the first ever English-language comedy show featuring local and expat talent in Russia’s first ever purpose-built comedy club - at last a genuine, bone fide contribution to culture.

At last - a sense of service. I’ve even started doing open mics in Russian which means I had to start from the beginning (if with two years’ experience) and I can report that you should take any laugh; however ironic or scornful. My only advice would be: do the skydive. Definitely do the skydive. But you already knew that.

Londoner Steve Foreman moved to Russia in 2008 planning to work in film while avoiding teaching English on the side. He now hosts a weekly comedy show on Moscow’s Capital FM 105.3 which can be downloaded as the Moscow Expats Comedy Podcast on ITunes, Soundcloud, stitcher and podcasts.com, bringing funny chat about life in modern-day Moscow and beyond. With listeners in over 40 countries, the podcast recently entered the top 20 most listened-to podcasts in the comedy section on ITunes in Russia.

Read more: A ride on the wild side: A madcap adventure by taxi in St. Petersburg>>>