Memories of my first Russian winter 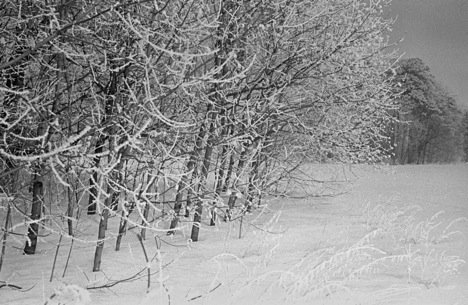 Russian winters can be severe, but are beautiful.

Anatoly Garanin/RIA Novosti
Walking through waist-deep snow, slipping and falling on ice, participating in winter sports and taking weekly trips to the sauna- the first winter was the most special.

Before moving to the Russian Far East in 2003, I had experienced snow, both in the United States as a child and as an adult when I trekked in the Himalayas in India and Nepal. those experiences could not possibly prepare me for my first winter in Sakhalin.

As my plane started its descent towards Yuzhno-Sakhalinsk, all I could see was an enormous white blanket of snow that covered the forests and small towns of the island. It was a beautiful sight but as I was to discover over the next few months, the winters took a lot of getting used to.

The first task was to get the right shoes to walk on ice. While heading to a shop to buy these shoes, I slipped and fell on the icy sidewalk a number of times. So my friend, who was accompanying me, tried to support me while walking, but since she was much lighter than me, I took her down each time I fell.  So comical was the sight that passers-by on the street had a good laugh at our expense.

The right shoes helped me keep my balance most of the time but I had gotten used to the odd fall, and saw in it. It snows for about 6 months a year in Sakhalin and this depresses a lot of people, but I had the advantage of experiencing this phenomenon as a novelty.

I had to switch from jogging to skating and skiing as a way of keeping fit, but the cold weather itself was enough to burn off the calories. What could be better than eating (and drinking) as much as you want and still lose weight in the bargain? Residents of the Russian Far East have a great amount of enthusiasm for winter sports and outdoor activities, and within a few weeks, I was trying out all sorts of new activities from ice-climbing to fishing on the frozen Sea of Okhotsk.

Another Russian tradition I endeared myself to, was the weekly visit to the banya (sauna). I have always been liberal by Indian standards but was still a bit surprised to go into the steam room completely naked. Of course, even though there were only men inside, it still felt odd the first time. The friend who took me to the banya the first time told me it was a tradition to get warmed up inside and then run outside and jump into fallen snow. This is something that gives me a thrill even 13 years later.

What is truly amazing about the Sakhalin winter is the sheer amount of sunshine. In Moscow, and Scandinavia, the winters can be grey and gloomy, but in the Russian Far East, if it’s there’s no blizzard, chances are that the sky will be clear and blue with beautiful sunlight. I spent many a sunny winter Saturday walking in the forests, enjoying the best of what nature had to offer.

The winters were also perfect for stargazing.  The winter skies at night in the Russian Far East are almost as clear as those in the African savannah.

Residents of the Russian Far East are a tough and resilient lot, and take the extreme weather in their stride. I was used to my landline connection in Bombay going dead each time we had a major monsoon downpour. So the fact that the heavy snow did not disrupt phone services or the heating, water electricity supplies came big surprise. What would have been considered a blizzard in New York when I was growing up was looked upon as a minor storm in Sakhalin.

Occasionally, major snowstorms did cause the closure of airports and the suspension of ferry services from the Russian mainland, but what was really impressive was how quickly everything was running again once the storms subsided.

People got to university and to work on time no matter how rough the weather was.

One of my fondest memories was the first time I walked through waist-deep snow (with heavy winds blowing towards me) to get to work.  It was a great achievement to fight the elements of nature that seemed to be aligned me.  The simple and warm black tea that I had inside the heated office building after that adventure tasted better than the finest Assam or Darjeeling blends.

The only thing that continues to scare me about winters in the Russian Far East the dangerously sharp and pointed icicles that are perched on the roofs of old 5-floor buildings. The authorities do their best to clear them off but then given the amount of snow and ice in that part of the world, fresh icicles form rather quickly.

A true Russian winter needs to be embraced in all its intensity. It can help change your perspectives on many aspects of life.