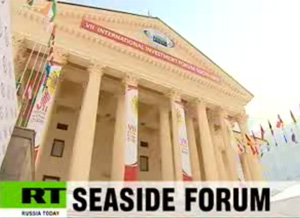 "Things don't just become normal in one day," David Yakobashvili, chairman of dairy producer Wimm-Bill-Dann, said on the sidelines of the 2008 Sochi International Investment Forum. "We can't yet say that a trend exists, it is still emotions shaking the markets on the basis of politicians' statements. We may still not have reached a bottom."

Russia's MICEX and RTS indexes soared 29 percent and 22 percent, respectively, on Friday, reversing most of the week's losses. The gains came a day after President Dmitry Medvedev unveiled a multibillion-dollar stimulus package to buoy the markets.

An air of jubilation permeated the forum on Friday afternoon, yet business leaders warned that the effects of Russia's market drop would be felt for at least a year and would spread to sectors of the economy as yet untouched.

"The reasons that created this situation still exist," Andrei Sharonov, managing director of Troika Dialog and a former deputy economy minister, said in an interview. "Mechel, TNK-BP, Georgia - they just accelerated the process."

About $25 billion of foreign capital fled the country in the wake of Russia's war with Georgia in August, while its markets sank more than 20 percent in the first half of last week.

"When all was quiet on the market, we were closing our eyes to some potential risks," said Viktor Kuzmenko, the head of UniCredit Bank in the southern city of Stavropol. "Now we are giving risk management our utmost attention."

Many said they expected that the credit crunch would soon hit Russia's real estate market, collapsing prices and, crucially, passing the pain of the turmoil on to middle-class Russians, who tend to invest in hard assets such as real estate rather than stocks and bonds. Real wages could also be affected, as firms cut down on projects and labor in the face of decreased credit lines and slowed growth.

"That's the next step," said Sharonov, referring to the possible drop in wages.

The overwhelming popularity of Prime Minister Vladimir Putin and his protege, Medvedev, has come on annual real GDP growth of about 7 percent, providing average Russians with unprecedented wealth.

Newscasts on state television last week failed to cover the turmoil on Russia's markets until they were first closed on Wednesday, and many mid-level participants at the Sochi forum said they believed that no crisis existed. Key to the government's policy, analysts said, was ensuring that no retail banks failed.

Addressing the forum, Putin stuck to familiar themes, reassuring investors that Russia would keep its markets open to foreign investment, while urging reciprocal access abroad. But he also employed the tough anti-U.S. rhetoric that has characterized his comments since last month's Georgian conflict, laying the blame for the market plunge squarely on the financial turmoil in the United States.

His comments appeared to be a response to comments last week from U.S. Secretary of State Condoleezza Rice that Russia's leadership was putting the country "on a one-way path to self-imposed isolation and international irrelevance."

"I take any attempts to throw us back to the time of the Cold War as ... a direct threat to our modernization project," Putin told the forum. "Confrontation is not our choice."

At a meeting Thursday evening at his Sochi summer residence, Putin assured top Western investors - including the chief executives of BP, Shell, Total, Deutsche Bank and Siemens - that there were "no systemic problems in the Russian economy," news agencies reported.

Yet some expect changes ahead. Veniamin Golubitsky, head of construction firm Renova Stroygroup, said he thought a new real estate landscape would emerge because of the credit crunch.

"It's harder for us now to get money from the banks," Golubitsky said, adding that he believed that housing prices could fall up to 10 percent this year.

"The crisis will lead to some changes in the market generally," Golubitsky said. "Bigger companies will absorb the smaller ones, as those will have their access to credit cut."

He said Renova Stroygroup, part of billionaire Viktor Vekselberg's Renova Group, was planning to buy up small firms in Russia and abroad, but declined to provide details on funding or potential assets.

One of the country's richest businessmen, Mikhail Prokhorov, also said he was considering investing in real estate projects but declined to provide details. "You'll see," he said, before ducking into a black Mercedes and speeding away after the forum's opening session.

Both Prokhorov and Golubitsky praised the state's emergency measures, with the government lowering export tariffs for oil firms and reserve requirements for banks, injecting up to $44 billion the banking sector and pledging up to $20 billion to prop up state-run blue chips on the market.

The initial announcement of the extra access to funds named VTB, Sberbank and Gazprombank as the only beneficiaries, but an additional 25 banks will be included on the list, the Finance Ministry said Sunday evening, Bloomberg reported.

"Many investors are worrying whether Russia's economy will hold through this financial tsunami," Deputy Prime Minister Alexander Zhukov told the forum. "Ten years ago, something similar happened. Nothing like this can happen in Russia today," he said, noting that Russia had amassed $560 billion in foreign reserves as well as over $160 billion in two oil stabilization funds.

The global credit crisis and the latest events on Russian markets "are not a catastrophe for our economy," he said.

Foreign investors, vastly outnumbered by Russians at the forum, were more circumspect.

"It is a critical time for Russia," Samuel DiPiazza, CEO of PricewaterhouseCoopers, told the forum. "There are great opportunities today, and there are great risks."

"You must be careful how you respond to the crisis and not endanger the fundamentals," he said. "Capital will move where there is a receptive market - markets that have a good and efficient rule of law."

Sharonov said the government had consulted leading bankers in drawing up its stimulus package. A big boost was said to have come from Alexander Shokhin, head of the Russian Union of Industrialists and Entrepreneurs, or RSPP, which represents the country's top business leaders. Shokhin was one of the most visible participants of the Sochi forum.

On Saturday, he told reporters that three leading lights from the RSPP - Vekselberg, Troika Dialog president Ruben Vardanyan and LUKoil president Vagit Alekperov - had met with Medvedev in Moscow on Friday and proposed that a financial task force, comprising a small group of top state officials and businessmen, be formed. Shokhin said Medvedev had agreed to consider the idea, Interfax reported.

"The threat to the national economy has moved us toward each other, so that we cooperate to solve the problems closely," Golubitsky of Renova Stroygroup said, referring to government and business leaders.

VTB chief executive Andrei Kostin said his bank was weathering the crisis and expected to post "quite good" results at the end of the month. The results, he said, "will show that there are no problems in the bank. It is healthy," RIA-Novosti reported.

"We may expand our operations," he said, adding that he expected the Russian banking sector to consolidate as it passes through the crisis. He believed that the market situation would normalize in about a year.

"We can't relax or calm down, no matter what," Kostin said. "We have to be very cautious and adopt a highly responsible policy."

U.S. officials and businessmen at the forum warned that the war in Georgia, widely criticized by the administration of President George W. Bush, had prompted a freeze of U.S. investment in the country.

The conflict has increased perception of risk elsewhere in the economy, from labor productivity to tax concerns, Craig Arends of Ernst & Young told a plenary session. "The conflict in Georgia has caused some companies to take some time and take a look at when they'll continue their investment in Russia."

"The level of rhetoric was what alarmed everybody," said Michael Considine, head of the Russia desk at the Washington-based U.S. Chamber of Commerce, referring to U.S.-Russia relations. "It left a lot of questions with the business community and fear over potential types of response. We're still not 100 percent convinced that there won't be some kind of reaction."

Andrew Somers, president of the American Chamber of Commerce in Russia, said he knew of at least 10 firms who had postponed investment projects in the country.

Yet many investors said they took a long-term view and relied on Russia's strong fundamentals to boost investment going forward, casting off analysts' assertions that growth could slow considerably if the price of commodities, mainly oil and metals, continues to slide.

"When the world situation calms down, the world will see that the Russian economy is healthy and reliable enough for investment," Kostin said.

"We have seen growing activity in mergers and acquisitions recently," he said. "Both foreign and Russian investors are active."

"Foreign investors are also showing increasing interest in getting into infrastructure projects, which, due to state involvement, seem to be a stable investment," Antonov said.

Contracts worth $19.7 billion, mainly in construction and resort development, were signed at the forum in Sochi, which was chosen last year by the International Olympic Committee to host the 2014 Winter Olympics.

Alexander Gnusaryov, chairman of the United Industrial Corporation, a holding that manages $12 billion worth of diversified assets, was sanguine about the situation, saying foreigners should think carefully before buying volatile Russian stocks.

"The situation in the market is changing very quickly now, so you have to be very cautious when investing in shares of Russian companies," Gnusaryov said.

And he warned foreign firms against jumping into opening new projects. "In normal times, a company that opens new projects sees its shares grow, but today it will only frighten investors off," he said.