A crisis plan with uncertain origins 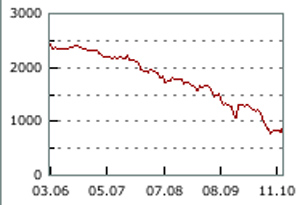 President Dmitry Medvedev and Prime Minister Vladimir Putin have shown that they are taking the crisis seriously, holding a flurry of crisis-related talks with ministers, economic advisers and prominent businessmen since Sept. 9, when domestic stock markets took their first big hit.

Not until 27 days later, however, did Putin announce that his Cabinet and the Kremlin had created a secretive anti-crisis task force comprised of ministers and select business leaders.

Further compounding the opacity of the decision-making process, Putin and Medvedev have taken turns announcing multibillion-dollar bailouts and other anti-crisis measures over the weeks.

Investors are unsure how to judge the government's approach, with some praising it for acting decisively at a critical time and others saying it needs to work more closely with the business community.

Putin's spokesman Dmitry Peskov would not say whether the government has a coherent longer-term strategy on how to deal with the financial crisis.

"We have a hands-on approach here — the situation is being analyzed and then different variants of the solutions are being discussed," Peskov said.

The government has decided to inform investors about its decisions through announcements by Putin or Medvedev, he said.

Asked which of the two takes the lead in the decision-making, Peskov said they acted consensually.

At the Economic Development Ministry, a senior official said it was too early to unveil any rescue strategy. "We are working on it," said Oleg Zasov, deputy director of the ministry's macroeconomic forecasting department. He declined further comment.

Igor Yurgens, head of the Institute of Modern Development, which advises the Kremlin on economic policy, declined to comment on the government's response to the financial crisis.

Details about the new anti-crisis task force are few. In announcing its formation on Oct. 6, Putin said it would not operate under any formal framework. Putin told a meeting of Communist lawmakers on Thursday that members of the task force included Finance Minister Alexei Kudrin, Economic Development Minister Elvira Nabiullina and the heads of major domestic banks.

The only banking tycoon known to have held talks with the government over the past month is Mikhail Fridman, who met with Medvedev on Oct. 6. In the televised part of the meeting, the two spoke about the financial turmoil in Western economies, with Fridman asserting that the domestic economy was well insulated against external shocks.

Alexander Shokhin, head of the Russian Union of Industrialists and Entrepreneurs, the big business lobbying group, has complained that the government was involving a limited number of companies in its discussions on rescue measures.

"We believe that the list of participants should be expanded and that a foundation should be laid for interaction between the state and businesses on the crisis," Shokhin said in the open letter to the country's leaders Thursday.

He also said the rules under which companies qualify for state support during the crisis should be made public and transparent.

"Although the authorities get advice from businesses, often only those participating in the dialogue on behalf of the businesses get access to [state] resources," Shokhin said.

Communist lawmakers have also complained about a lack of transparency. Before the State Duma approved a plan to inject about 1 trillion rubles into the banking system last week, they questioned the transparency of the bailout and the accountability of the market players and government officials involved.

However, some market players have applauded the government for acting quickly and expressed satisfaction with its level of transparency.

"It's obvious that Russian officials have had sleepless nights," said Gleb Davidyuk, a Moscow-based partner at Mint Capital, a Scandinavian private equity fund with $150 million under management.

He added, however, that Russia was not yet fully integrated into the West and therefore the global financial crisis had limited repercussions in the fundamentals of the country's economy. "There is panic in Europe; there is panic in the U.S. But I do not feel panic in Russia," he said.

Yekaterina Malofeyeva, chief economist at Renaissance Capital, defended the government's secretiveness. "One cannot say that such decisions are always made openly in the West," she said. "For example, the Federal Reserve and the Bank of England sometimes do not publish the minutes to their meetings for weeks, and many market-sensitive decisions are made behind closed doors."

Malofeyeva said she believed that the Russian government's management of the crisis mirrored efforts by Western governments.

"It is not fair to say that they make their decisions without any consultations with market participants," she said. "There are often brainstorming sessions between Central Bank officials, the Finance Ministry, the Federal Service for Financial Markets and other market experts. I am not sure there is a big difference between how decisions are made in Russia today and how they are made in the West."