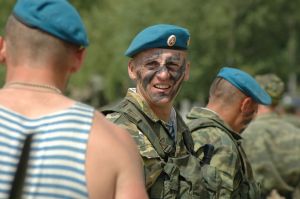 The 1.2 million-strong Russian armed forces are to be overhauled for the first time since the end of World War II in 1945. The first and most important change is the discharge of between 200,000 and 1 million servicemen.

Before Anatoly Serdyukov became defence minister in February 2007, there were plans for pruning the Russian armed forces after 2016. However, on October 14, Serdyukov told the Defence Ministry board they had three years to implement these changes.

The 355,000-strong officer corps will be reduced to just 150,000. Serdyukov said the number of Russian army officers would match international standards. "Global experience shows that officers account for 7-20 percent of army personnel," he said.

The entire officer training system will also change: "We now have 65 higher military education establishments, including 15 academies, four military universities and 46 military schools and colleges. Instead, we want to set up 10 comprehensive higher education establishments." The plan is to establish three military research and educational centres, six military academies and one military university. The new centres will have territorial, rather than armed service, affiliation.

Warrant officers have to go

The Tsarist Army and White Army of the 1918-22 Russian Civil War both had warrant officer and sub-lieutenant positions, which were reinstated in the Soviet armed forces in 1971.

Apart from commanding military units, warrant officers and sub-lieutenants also head most warehouses, petroleum, fuel and lubricant (POL) depots and canteens. The fact their status is lower than officers does not mean they are less competent. Experience shows that 40-year-old warrant officers with more than 20 years' service contribute to training young lieutenants and even influence the judgment of colonels and generals.

The popularity of warrant officers is proved by numerous army jokes, such as this one: "Don't try to convince a warrant officer that the earth is round, or he will make you flatten it out!"

In effect, the Defence Ministry will reinstate non-commissioned officer positions that existed in the Tsarist Army until the beginning of World War I in 1914. But it is still unclear how so many NCOs will be trained in the next three to four years, and how discharged officers, warrant officers and sub-lieutenants will be provided with housing and jobs.

Serdyukov claimed all officers will be discharged in accordance with existing social security standards, stating, "Naturally, we will provide them with civilian jobs and training."

The Defence Minister said he intended to eliminate the disparity between the number of senior and junior officers by 2012. The Russian armed forces currently have over 1,100 generals, which will be reduced to 900 by 2012. There are also plans to reduce the number of colonels, lieutenant-colonels and majors. At the same time, the number of lieutenants and senior lieutenants will swell from 50,000 to 60,000.

Moreover, there are plans for a ten-fold reduction in unit numbers and to get rid of undermanned units that are swelled to full capacity only in wartime. Serdyukov said only permanent-readiness units and those officers in charge of specific units, rather than warehouse attendants, would remain.

From divisions to brigades

It has been decided to disband divisions and to set up brigades, with tactical units having more personnel than a regiment but less than a division. This is the most curious and drastic aspect of the new proposals, as the current tables of organisation based on the divisional concept evolved during the 1945-46 post-war reforms and have remained virtually unchanged.

"We now have a four-tier troop control system comprising military districts, armies, divisions and regiments. We are switching over to a three-tier system that will be made up of military districts, tactical commands and brigades," Serdyukov explained.

In his opinion, this will help eliminate multi-tier systems and ensure rapid troop control. "We have certain troops - namely, the airforce - which will receive new weapons and train more effectively," the Defence Minister said. Furthermore, each military district will receive one airborne brigade subordinated to district commanders.

The famous Tamanskaya and Kantemirovskaya divisions stationed near Moscow will be the first to go. The Tamanskaya Division, which comprises six regiments, two battalions and logistics support units, has always tested new weapons systems. It will be disbanded and converted into two or three motorised-rifle brigades for the Moscow Military District. The newly established brigades will retain all the honorary divisional titles.

During 2009-12, 23 combined arms divisions will be disbanded and 12 motorised-rifle brigades will be reorganised. It is intended to establish over 80 service branch brigades, including 40 combined arms brigades, 20 missile and artillery brigades and more than 10 signal corps brigades, as well as army-level air-defence and radio-electronic warfare brigades. The only remaining machine-gun/artillery division will be stationed in Russia's Far East.

Reform Reaction: "We can't afford such a huge army"

The army cannot be perceived outside the context of general state problems. Defence capability is an affair of the state, rather than purely military business. The state cannot afford to implement cheap defence programmes: it takes time and money to train professional soldiers and to win wars.

We must preserve a professional officer corps during our reforms, because it is extremely difficult to restore this potential in the future. The Red Army sustained terrible losses during the 1941-45 Great Patriotic War against Nazi Germany because its officer corps had been decimated in the late 1930s and because young commanders require experience for troop control.

The 2007 Russian armed forces have changed significantly since the first Chechen campaign in 1995, and even since 2003. This August, Russia's special forces and airborne troops were the last to enter Georgia because the high command made mistakes, neglecting to issue required orders. The North Caucasian Military District got around this oversight by deploying several regiments in the region.

The army needs new equipment and has to be overhauled. Instead of across-the-board cuts, the army needs statesmen and generals like Alexander Gorchakov and Alexander Suvorov, who understood its requirements. The conversion of all divisions into brigades is an expensive and not always feasible project.

The conversion from divisions to brigades implies preparing the army for local conflicts, rather than large-scale operations against a powerful adversary.

The new three-tier troop control system comprising military districts, tactical commands and brigades was tested during the recent conflict with Georgia, which also partially influenced the decision to introduce it. The headquarters of the North Caucasian Military District set up a special group for directly controlling Russia's regimental task forces in South Ossetia.

However, people criticise the introduction of the brigade system because it would allegedly be unwise to modify the current system, which has been operating more or less effectively for the last 60 years. But Russia cannot remain in the 20th century at a time when sophisticated military equipment, troop control systems and telecommunications networks are being introduced.

The Russian armed forces have been overhauled without respite since 1988. Two years ago, [then Defence Minister] Sergei Ivanov said the reforms were over. But now we can see the new Defence Minister has started implementing new reforms.

There are plans to discharge over 50 percent of all officers. It will be impossible to replace them with civilians or contract soldiers. This will make trouble. The plans now being implemented by Serdyukov do not solve the problem of our military security.

Most importantly, the rearmament programme has failed. Modern or combat-ready weapons systems account for just 20 percent of all military equipment.


Konstantin Makiyenko, deputy director of the Centre for Analysis of Strategies and Technologies (CAST):

Although Anatoly Serdyukov is the civilian defence minister, this does not mean the military reform will fail. On the contrary, this factor may increase his chances of success. Experience shows the Russian armed forces are unable to overhaul themselves, or at least that they have failed to accomplish this objective to date.

Russia's army, which numbers a million officers and men, guards its own installations, garrisons and numerous depots. I do not think we need such a bloated army. Let's face facts: we cannot afford to maintain such a huge army even after a decade of sustained economic growth.

The history of Russian warrant officers

The first Russian warrant officers appeared in the mid-17th century. In 1649, Tsar Alexei Mikhailovich signed a decree on renaming colour-bearers, who were appointed from among the bravest, strongest and battle-hardened soldiers, as warrant officers.

The Russian word praporshchik, meaning `warrant officer,' is derived from the ancient Slavic word prapor, which means a banner or pennant on a flagstaff.

During the early 18th century, Peter the Great moved to create a regular army. In 1712 he introduced the rank of warrant officer as the first (junior) infantry and cavalry officer rank.

Previously, this rank was called fendrik, a distorted version of the German rank Fahnrich, which is derived from the word Fahne - also meaning `banner'.

In 1811, warrant officers also began to serve with artillery units. Starting in 1884, military personnel were promoted to warrant officers only in wartime. From 1886, junior officers of the reserve could also receive this rank.