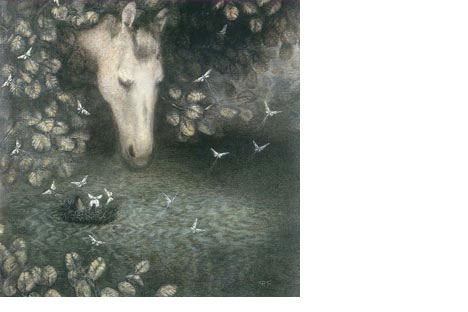 With no children of his own and not knowing his natural parents (in 1940 he was adopted from an orphanage) Sergey Kozlov grew up to become one of the best Russian fairytale writers ever. Despite his vocation, which became evident during his school years, Kozlov lived a quiet, almost solitary life and never desired fame; he didn’t even earn his living by writing alone. After graduating from Moscow Literary Institute in the 1960s and before honing his talents as a writer, Kozlov worked variously as a typographer, singing teacher, lathe operator and train fireman. Later, he participated in geological expeditions and guided tours of the open-air museum near Moscow.

Although Kozlov’s stories are written as bedtime stories, to send children to sleep, they also keep parents wide awake and enchanted. Centred on the lives of various forest characters: Hedgehog, Little Bear, Hare, Squirrel and other animals endowed with human traits and distinct personalities, his fairytales have been translated into French, Japanese and several other languages. Alas, not yet into English though, hard as it is to believe. After all, his stories invite comparisons with British children’s favourite, Winnie the Pooh by A.A Milne, in the sense that funny, touching and generous characters bring the best in children. Not only do they develop imagination and sympathy with nature, but also expose the meaning of friendship in a subtle, unostentatious manner.

One of Sergey Kozlov’s tales, Hedgehog in the Fog, became famous worldwide after it was used as the basis for an acclaimed 1975 animated film of the same title by Soviet director Yuriy Norshteyn. Kozlov’s tales also furnished plots for cartoons such as In the Port and How Little Lion and Tortoise were Singing, whilst his nursery rhymes set to music gained vast popularity amongst children in the former USSR.

His fairytales refuse sharp distinctions between good and evil, and Kozlov never commits the sin or moralising in the pedagogic spirit apparent in some fairytales. That said, if evil is difficult to discern in his gentle universe then hardship is there despite the magical overtones, in characters’ pain or the passing of time.

As so often with great children’s literature, Kozlov’s tales are as much about adult life with its routines, obscure emotions and faint dreads. His animal characters are intelligent, edged around by melancholy, and imbued with passivity through names like ‘Little Hedgehog’, ‘Little Bear’, etc. Nonetheless, the characters’ apparent delicacy testifies to their great strength, and the profound understanding of both the human and animal realms that they lend us.

Kozlov’s animals spend their time maintaining homes and friendships, laying-in stores for winter, listening out for seasonal winds and rains. Occasionally they gather together to treat each other to forest delights – mushrooms, apples and honey – invite each other out for river walks or sit in twilight on somebody’s porch, talking until the tea gets cold. Their simple lives, conversations and concerns are far from trivial, and they surprise the 2010 reader with insights that still ring true and confirm Kozlov as a serious writer – love and faith, pleasures of life, delicacy of beauty, fear and loss are all sensitively dealt with.

After reading a few of Kozlov’s fairytales that I had translated, my husband asked me whether he is as acclaimed in Russia as, say, UK children’s favourites Milne or Kenneth Grahame? I had to admit that he isn’t. Yet. Before I got hold of Kozlov’s collected tales for children I wasn’t aware that the animated film Hedgehog in the Fog was based on Kozlov’s story, but neither are many other Russians.

But now, after his death, Sergey Kozlov’s fairytales will inevitably carry his values over time and national borders, with help from firemen on trains, typographers, singing teachers, tour guides – people from every walk of life, who will still be drawn to Kozlov’s wonderful redemptive world that is so deeply rooted in friendship, community and natural beauty: precisely the values that our sometimes rootless modern urban existence seems to lack. Kozlov brings us back to our roots, and invites us to experience ourselves anew. In this respect, the fairytale has only just begun.

We invite you to read some of Sergey Kozlov's fairytales, translated by Ekaterina Godunova specially for our site