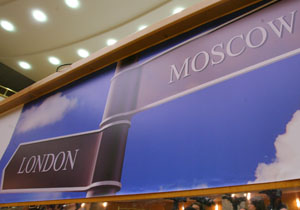 The generally accepted view is that Russia and the United Kingdom have more often than not been rivals on the world’s geopolitical stage, but in fact both great powers have more than once extended a helping hand to each other and provided significant support at key historical moments.

The first time this happened was in the middle of the second millennium, when both states were trying to become something more than middle-ranking regional powers. Britain was seeking alternative routes to China and trying to break Spain and Portugal’s trade monopoly, while Russia was waging successful military campaigns with the remaining elements of the Golden Horde (the state created by the successors of Genghis Khan after the break-up of the vast Mongol Empire), which enabled it to double the territory of the Tsardom of Russia and for the first time in Europe to make it bigger than the whole of the rest of Europe.

And so in 1547 Ivan IV, the Grand Prince of Moscow, known as Ivan the Terrible, was crowned tsar, and Britain, unlike many other states of the time, willingly recognised Ivan’s new title and even called him “emperor”. And in 1553 the British merchant Richard Chancellor, while searching for an alternative north-eastern route to China, landed on the Russian shore in the region of present-day Severodvinsk and was invited to Moscow for an audience with Ivan the Terrible.

The latter gave his approval for the establishment of trading relations between the Tsardom of Russia and Britain, and after two years (the time it took to deliver the Russian tsar’s reply to Britain, to found the Muscovy Trading Company, to obtain a patent from Queen Mary, successor to the late Edward VI, and a preferential permit from the Russian tsar to conduct duty-free trade) the Muscovy Company acquired chambers near the Kremlin and monopoly trading rights with Russia. Within the company’s chambers British laws applied, and it had its own court.
Although the monopoly rights of the Muscovy Company were gradually reduced, they were not completely lifted until the rule of Tsar Peter I, who was later proclaimed the first Emperor of Russia. And this happened in 1698, immediately after the young Peter’s visit to Koenigsberg, Brandenburg, Holland, Austria and Britain itself.

The Muscovy Company finally ceased to exist only in 1917, during the Russian Revolution, which interrupted the trading and economic relationship between Russia and Great Britain for three years. Only in 1920 were the governments of Russia and Great Britain able to restore trading and economic relations, setting up a Trade delegation in London, which originally fulfilled the function of a trade mission. This step was effectively a breakthrough in ending Russia’s trade isolation – other states decided to resume economic ties with Soviet Russia much later.

Since then bilateral cooperation has done nothing but develop. Now Russia has set itself the objective of modernising the economy and improving the investment climate. In connection with this Andrei Slepnev, Russia’s deputy minister of economic development, met a Russia Now correspondent and described his vision for the current situation in trade and economic relations between the Russian Federation and the UK (the full text is available on our website) and possible ways of expanding bilateral trade turnover.

The high-ranking official said that the main potential for growth lies in the development of trade in high-tech products, and the Russian government must give support to all significant initiatives by investors.

Andrei Slepnev: all important investment initiatives will be supported