Andrei Slepnev: all important investment initiatives will be supported 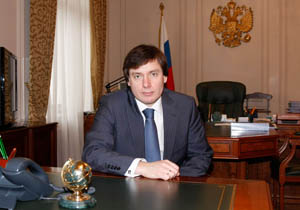 2010 marks the 90th anniversary of the Soviet Trade Delegation in Great Britain. What prompted the creation of that institution and what has its role been in Russian-British relations?

This year Russia and Britain can mark another notable anniversary, 455 years since the establishment of trade and economic relations between the two countries. The Moscow Trade Company, founded in Moscow in 1555, monopolised trade between Russia and England until 1698. Its members lived in palaces near the Moscow Kremlin and obeyed only English laws.
Our bilateral economic relations have been spotty, but Britain has always been a key trading partner for Russia. The establishment of a trade delegation in London in 1920 marked a breach of the two-year economic blockade of the Soviet Union. The two states restored business ties broken off after the 1917 Revolution and began trade relations with a clean slate.
The Trade Delegation played an important role during the fateful years of the Second World War when Russia (then the Soviet Union) and Great Britain were allies. The Delegation helped organise military supplies, placed orders for industrial equipment, raw materials and other goods, exported goods from the USSR and contributed to transferring foreign technical expertise to the USSR. After the war and until the 1980s, when the Soviet state monopolised all foreign trade, the delegation handled all issues connected with foreign trade. The Trade Mission (as it was called in the later Soviet period) included representatives of most foreign trade associations of the Soviet Foreign Trade Ministry and later the Ministry for Foreign Economic Relations of the USSR and Russia (MVES).

What, in your opinion, are the most important areas of activity for the Trade Mission?

The members of the Trade Mission not only represent the interests of the Russian Federation in Britain, but also help private businesses find potential partners, promote their products on the British market and attract foreign investment to Russia. Trade Mission experts study British experience in social and economic reform and make suggestions on how that experience can be used in Russia.

How would you assess the current state of Russian-British trade and economic relations?

Britain is a major partner of Russia in terms of services, the fourth largest investor in Russia, and the 11th largest trading partner among foreign countries. Trade was expanding rapidly before the crisis. In the five years prior to the crisis, mutual trade had increased almost fourfold. In 2008, trading volume reached $22.5 billion, of which $15 billion was Russian exports to Britain. In the context of the world financial and economic crisis, mutual trade declined but on average Russian exports to Britain declined less than exports to other EU countries.

However, the crisis is coming to an end and there is potential for growth beyond the pre-crisis level. The potential is associated primarily with the hi-tech sectors of the Russian economy. The implementation of projects in areas where Russian enterprises have accumulated experience in producing competitive goods (civilian aircraft, communications satellites, equipment for power stations, machine tools, watches, etc.) may objectively create conditions for a breakthrough in production cooperation. It is no accident that the export of Russian high value added products, including navigation, geodetic and semiconductor instruments, computer parts, engines, and power units increased by more than 50% in the last three years. That said, the amounts are still small in cost terms.

Russian industry has some sectors which possess unique technologies and production facilities and are well placed for integration into the world economy. This accounts for the interest in commercialisation of the results of Russian research and promotion of Russian technologies and science-intensive products in the world market. There is some positive experience of implementing world-standard hi-tech projects in the development of computer graphics, power generating equipment, the production of sophisticated parts from titanium alloys and aircraft building.

We are open to proposals and recommendations on the part of the business community that would form a list of high-potential projects that could be implemented on a bilateral basis. All the important initiatives in our bilateral cooperation will have direct and effective support from the Russian-British Intergovernmental Steering Committee on Trade and Investment. The Committee resumed functioning in November 2009 after a seven-year break. It is headed by such influential figures as Deputy Prime Minister of the Russian Federation – Finance Minister Alexei Kudrin and First State Secretary and Secretary for Business, Innovation and Skills, Lord Mandelson.

What is the Trade Mission doing to expand Russian-British business cooperation in this sphere?

The Russian Ministry of Economic Development and the Russian Trade Mission in Britain are engaged in a range of activities aimed at promoting and broadening bilateral cooperation, including providing information on the broadest range of economic, legal and organisational matters to British and Russian businessmen. In this way, government agencies help businessmen in the two countries establish direct links and promote mutually beneficial projects in the Russian and British markets.

The Committee has identified six priority areas for bilateral cooperation: financial services, the business environment, small and medium enterprises, energy and energy efficiency, high technologies, including nanotechnologies, and the use of the “Olympic legacy.” Prospects for cooperation within each of the areas have been discussed by government agency representatives and the business community. During the last session the two sides agreed to appoint permanent representatives responsible for coordinating cooperation in key areas.

We hope that our British partners will give due attention to the problem issues Russia raised during the session, including the access of Russian business to the British market, problems with obtaining British entry visas, etc.
The economies of countries such as Russia and Great Britain are closely intertwined. It is our deep conviction that the long-time tradition and the established links between the two countries warrant an optimistic assessment of the future of trade and economic cooperation between Russia and Great Britain. Even the pre-crisis level of $22.5 billion is by no means the “ceiling” for bilateral trade between the two great powers.