Master provocateur defers to the Ugra 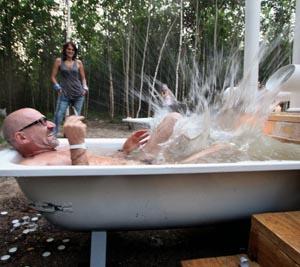 Kulik first became famous for his performance art in the 1990s, especially his work as a dog. Inspired by Josef Beuys, Kulik barked, menaced and nuzzled in cages constructed in the chicest galleries. It is said he even bit a critic. Later, Kulik hung like a disco ball, his body covered in mirrors. He has flown between buildings, almost scraping his nose off in the process. His photographs and videos - including nudes of him on the Moscow River embankment frolicking with this dogs - now sell for close to six figures.

These days, Kulik drinks mint tea and meditates in a Mongolian Yurt. He is building a tree house and acting downright messianic toward his artists. He likes to contemplate love and faith. Amazingly, his art has not yet suffered for it. As shown in the Archstoyanie (Architecture Standing) Festival ( see Veronika Dorman's piece), Kulik the curator is in his creative prime.


The fifth festival is ongoing in the village of Nikolo-Lenivets, on the banks of the picturesque Ugra River in the Kaluga region. Some words from Kulik himself:

What can you tell us about the festival?

This year’s festival will be different in many respects. Firstly, the territory has been increased more than tenfold, from 40 to 450 hectares. Secondly, landscape design has given way to radical creative ideas by keen artists, both young and mature.


Is there a paradox for these urban artists to work only with nature?

This is an open air festival (a beautiful location with lakes, rivers, beavers, girls, picturesque houses, and churches), and the participants are people used to living in large cities who associate themselves only with urban landscapes. A strange paradox arises: People who have long broken away from nature have become skilled artists and are now flocking to the element which is new to them. At the same time, they realise how interesting it is to treat nature as a normal subject to depict in their work.

They have great respect for their works, their art and exhibition halls, while nature is like air, it always exists. But when you take your work of art to nature, though it seems so powerful and impressive on white walls, the question arises: What it is all for?


And what did you decide?

The members of the festival “Archstoyanie – Nine Keys to the Labyrinth” are convinced: Nature is not for us, we are part of nature. Art is a commentary to nature, it underlines the best but does not overwrite.

This may be not a very popular position yet, but I am convinced that it has helped mankind survive. ...Over the past 300 years, modern art has departed from nature, and we are now bringing it back. We will see what the result will be: the scale is great, there are many artists involved, and all this can only be assessed once it has taken place. Everyone knows that a child has one head, two arms and two legs, and yet, people are very different when they are born.


Which works stand out?

It is hard to say. We are now going to look at Yuri Grigoryan’s group, and this is very interesting because he worked a miracle, by technical means of course. He worked with nature, landscape, equipment, historical and even religious allusions. I don’t want to tell your viewers what will be there as they are, no doubt, inquisitive people who will certainly come to appreciate modern art, nature and magic.


Can you tell us about your home?

Well, this is not part of this project, this is just where I live, where I would like to live all my life, but this was impossible.