Standing Architecture: sculpting art out of the Ugra’s banks 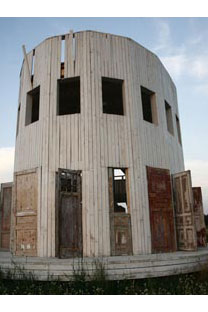 “Tired of working in basement workshops in the city, I looked for a site with history, an old church, a deep river,” explained Moscow-based architect Vasily Shchetinin, founder of the Nicola-Lenivets artists’ colony. In 1989, during the final days of the Soviet Union, he arrived on the banks of the Ugra (in the Kaluga Region, 200 km from Moscow) in search of a remote corner far from civilization. He found a sleepy village on the verge of disappearing.

Besides the breathtaking landscape, there was little that remained of the former glory of this rural area that can trace its history back to the third century B.C. An outpost of medieval Russia, the region was notably the scene of several key battles, including the Stand on the Ugra River that marked the end of Tartar-Mongol dominance in the 15th century.

Shchetinin was soon followed to the area by artist and architect friends. On the invitation of the painter Nikolai Polissky, local residents put down their vodka bottles, rolled up their sleeves and helped the artist create monumental works in wood, hay or branches. Today, the entire landscape has been reshaped by these fantastic creations that combine nature and contemporary architecture.

In the summer of 2006, the first-ever Arkhstoyanie (Standing Architecture) Festival gave Russian and international artists the opportunity to contribute to the Nicola-Lenivets “land art” movement. Every year since then, the banks of the Ugra have been converted into an artistic and spiritual laboratory for dozens of artists.

“Art is commentary from nature, it’s what emphasizes the best in it; art emphasizes but does not rewrite,” said Oleg Kulik, festival curator and the muse behind this year’s Arkhstoyanie theme, “Nine Muses of the Labyrinth: A Forest Liturgy.” This year the festival will display 24 works from an equal number of artists and artistic groups. Kulik noted that the event is “a progression from the local to the global, from natural landscapes to internal and psychological landscapes, and an attempt to link them all together.”

An example of this is the work of artists Ivan Kolesnikov and Sergei Denisov, who sewed stitches in a ravine as a way of “repairing” the earth as though it were a living body. Two other artists, Dmitri Alekseev and Aleksei Ivanov, created the festival entrance area, in an effort to break down barriers between people. They built a giant wooden cone with stretched fabric that “hears, sees, grabs scattered ideas (from the people going by) and unites them,” by allowing passersby to begin to see and hear others. This ideal, to transform viewers, offers an antidote to the typical Moscow gallery scene.

ART IN THE WILD