The price of tsunami 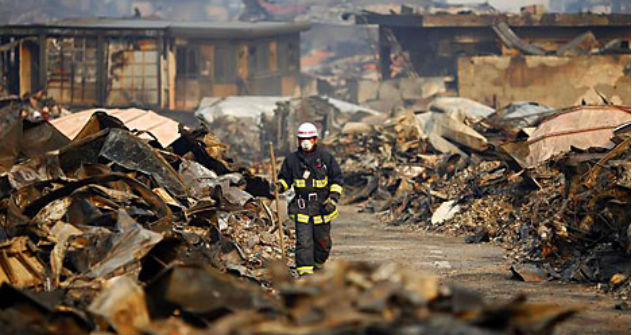 Rescue worker walks through a destroyed residential area of tsunami-hit Otsuchi March 14, 2011. In the town of Otsuchi in Iwate prefecture, 12,000 out of a population of 15,000 have disappeared following Friday's massive earthquake and tsunami. So

The unprecedented earthquake in Japan could affect the economy of the entire East Asia region.

By 12th of March, all the indices, characterizing the Japanese economy and financial system, had collapsed. The natural disaster had a negative impact on the other markets as well, particularly in East Asia. Meanwhile, the Japanese economy, which was considered to be the world’s third largest after the US and Chinese economies has, nearly overnight, slipped below India’s level.

All this has impacted the Russian closing stock prices. Trading on the Russian stock market ended with a 0.68% decline of the MICEX index, and a 1.01% drop of the RTS index. Many analysts are expecting the negative trend to continue.

Due to the constant high risk of earthquakes and tsunamis in Japan, it is a custom to insure everything and anything possible. This time, experts estimate insurance payments may reach $20 billion.

As for Japan’s reconstruction, economist Nouriel Roubini told Bloomberg that it requires long-term financing. But even before the earthquake, the country’s budget deficit amounted to 10% of the GDP. Therefore, suggests Nouriel Roubini, the effects on the confidence in the Japanese economy will be significant.

There are a number of other negative economic indicators. According to the estimates of the World Organization of Creditors and the IMF, the ratio of Japan’s national debt-to-GDP ratio had exceeded 225% in 2010. But public debt coverage with the national reserves is purely symbolic – only 9%. Thus, Nouriel Roubini’s conclusion is discouraging: “The earthquake is the worst thing that can happen in Japan at the worst time”.

The largest Japanese investment bank, Nomura, believes that the total impact will be closer to the consequences of the 1995 Kobe earthquake, which cost about 2.5 per cent of the country’s GDP, Kommersant reported.

Meanwhile, the shutdown of Japan’s nuclear power industry is likely to mean increased demand for oil, coal and gas – something Russia has already rushed to assist in meeting – potentially pushing prices higher. Some Japanese and South Korean analysts are not ruling out the possibility that the country’s main focus on nuclear energy will shift. And it is not excluded that Japan’s import of geographically “nearest” oil reserves from Russia could rise by 15%, if not 20%.

But a contraction in the Japanese economy would also have an impact on the car industry.Globally, components and spare parts are frequently sourced from Japan and there could be a decline in car production worldwide.

That could have a specific impact on planned Russo-Japanese joint ventures such as the proposed tie-up between Toyota and Sollers to build vehicles in the Far East.

Russia, especially the Far East, has long been a final resting place for second-hand Japanese vehicles. And with thousands of vehicles “drowned” in the tsunami and subsequent flooding, auctioneers are bracing themselves for a torrent of unwanted cars coming from the east, Autobusiness.ru reported.

The portal said that many Russians are willing to buy cheap, damaged vehicles in the hope of refurbishing them to sell on at a profit. But experts warn that sophisticated electronics are often irreparable after being submerged, and expensive cars lose much of their resale value as a result.

In a market briefing, UralSib's analyst Chris Weafer noted that mid-session figures in the regional markets showed relatively small changes on Monday, despite a predictable dip in the Tokyo bourse.

“Because of the unprecedented nature of the catastrophe in Japan – and the rapid injection of $183 billion in the economy by the Bank of Japan – nobody has any idea of the longer-term implications for the regional or global economy,” he commented. “That may not be clear for weeks.”