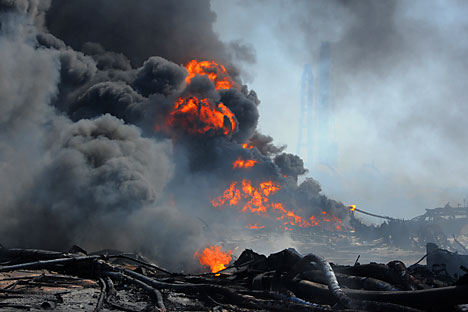 Does Japan face its own Chernobyl? Could the situation happen in Russia? Experts weigh in.

Prominent experts in the Russian nuclear industry were asked to analyze the situation at the damaged Japanese nuclear power plant, and they said the plant, which was built by Americans 40 years ago, was old and rundown. Russia has no nuclear plants of this kind.

“I am forced to compare the accident at the Fukushima nuclear power plant with Chernobyl,” said Vladimir Asmolov, the first deputy general director of Rosenergoatom and one of the main people who dealt with the aftermath of the Chernobyl accident. “In Chernobyl, the radiation level in my office was 250 milliroentgen and we were sitting in this zone for eight hours a day over several weeks. At Fukushima, the contamination on the edge of the plant is 100 milliroentgen. According to International Atomic Energy Agency’s standards, this does not pose a serious threat to people’s health. In addition, the background radiation, unlike Chernobyl, produces short-lived radioisotopes of the inert gases xenon and krypton. Panic and radiation-phobia are the scariest factors for humans. I’m confident that the population could have remained in their homes at Fukushima and there was no need to evacuate tens of thousands of people. But this was a decision made by the Japanese government.”

“In Japan, two natural disasters overlapped – a very powerful earthquake and extreme flooding. Such a thing could never happen here in principle due to technical factors,” Asmolov said. “The Fukushima plant is 40 years old and there are weaknesses in its ideology despite all the modernization. Above all, it only has one cooling cycle, while all Russian nuclear power plants have a dual system. If something of this sort happened here, we would send the water from the second cycle to the first. With no power supply, the Japanese had to spend too much time searching for ways to flood the reactor with seawater. There was an explosion and the facility was damaged. But the power unit wasn’t damaged and this is important in terms of safety. The Japanese acted correctly and sacrificed two reactors so that the accident didn’t spread any further. There is no point in rebuilding these units.”

“What’s the worst-case scenario?” Asmolov asked. “If all of the personnel abandons the plant for some reason and things get out of control. The staff set up by [Russian atomic energy corporation] Rosatom following the accident in Japan even took this rash option into account. Radioisotopes would begin entering the soil within eight days. But nobody is going to abandon the plant and the situation is under control. I don’t see any scenario in which the accident in Japan could affect Russian territory. I should stress that Russia is receiving information on the condition of the nuclear power plant in Japan in real time via the Moscow branch of the World Association of Nuclear Operators.”

“It is ridiculous to talk about the damage from this accident given the tragedy Japan has had to endure as a result of the tsunami,” said Rafael Arutyunyan, another nuclear expert. “The consequences are quite disparate. Note that not a single person has died because of the radiation factor. In Russia, a nuclear power plant has standard autonomous power supply for 24 hours if external power fails and plants are currently being built that are capable of operating for 72 hours using autonomous power supply, which is a long time. This figure was six hours at the Fukushima nuclear power plant, but not even this helped because the diesel engines were flooded with seawater and stopped working.”