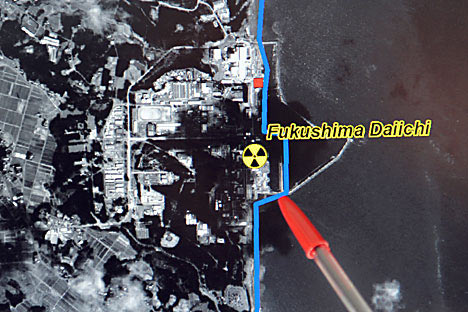 The Fukushima disaster has revived concerns about the safety of nuclear plants. Experts review the safety of Russian reactors since the 1986 Chernobyl catastrophe.

We cannot develop dangerous industries without due consideration of natural processes. The worst catastrophes in recent years, some with huge numbers of human victims, have been triggered by the water element, so we should think ten times before deciding to situate new atomic power plants and large oil refineries in coastal zones. We have seen in Japan how a large oil-refining plant burns when affected by the elements. This will deliver a colossal blow to the ecology, to say nothing of the economic damage. Why should we make the same mistake? When we were deciding where to put sites connected with the development of the Sakhalin shelf, we tried to tuck them away deep in the territory. I consider it best to move such sites back from the coastline and choose elevated places for construction. In connection with the development of means of transport in Russia’s Far East, with deliveries of oil and gas to China and Korea, we need to approach the situating of such sites very carefully.

Vladimir GUBAREV, writer and dramatist, author of the book and play Sarcophagus, about the catastrophe at the Chernobyl atomic energy plant:

Russian atomic scientists are perplexed: how is it possible that in Japan, where they have the highest level of technological and performance discipline, they lost control of six power-generating units at once? The cause, in my view, is the confluence of two events: an earthquake and a tsunami. None of the project designs anticipated such a probability. That’s the first thing. The second thing is that at Chernobyl, government resources were immediately activated — they created a headquarters and brought in all the ministries and departments. In Japan there was none of that. Fukushima is owned by a private company. And it turned out to be incapable of dealing with everything that happened singlehandedly. In order to move up reserve energy supplies, they spent several days negotiating with another private company…

Rosatom is ready to help Japan resolve the situation at the crippled atomic power plant Fukushima-1 should we receive such a request. This is entirely up to the Japanese side. As soon as our Japanese colleagues tell us what help they need, naturally, we will respond immediately. As for plans to build atomic power plants in Russia and abroad, our colleagues from Turkey have confirmed that the project for the Akkuyu power plant will be put through. And Bulgarian Prime Minister Boyko Borisov said a few days ago that he favored construction of the Belene atomic power plant. In Russia, meanwhile, as both President Dmitri Medvedev and Prime Minister Vladimir Putin have repeatedly stressed, development of heat-and-power engineering without nuclear energy is not considered possible.

“Had the disaster occurred for any other reason than a tsunami brought on by an earthquake, we most likely wouldn’t have even learned about it. The Japanese would have brought things under control quickly. If it weren’t for a sustained loss of electricity supply for five straight days, the Japanese would have solved the diesel generator problem faster. As a reminder, Fukushima-1 power units are equipped with one passive safety system and two active safety systems, which unfortunately require electricity to operate.”

“As far as Russian power plants are concerned, safety standards are at a totally different level now. It’s a far cry from when the Fukushima was built 40 years ago. Of course they did some upgrades, but I’m not going to judge how adequate they were. Today’s safety standards are much stricter, and modern Russian nuclear power plants meet them. Obviously, we have much more water to maintain the integrity of the [reactor] zone. Our AES-2006 design with modern safety systems (an active and a passive one) has two circuits. Its significant feature is that water flows through the reactor, through the steam generator, in a fairly contaminated state within the primary circuit and transfers heat to clean water in the secondary circuit, which in turn transmits heat to a turbine. We have everything tucked into a containment casing with two pipes leading out of it, but they contain clean water. Plus, this design incorporates a melt trap and a passive air heat exchanger, which draws heat from under the containment to outside through natural air circulation. Belarus, which signed an inter-governmental agreement with us several days ago, can have peace of mind in terms of their safety with this kind of design.”

“Unfortunately, we got to such a level only after Chernobyl. And we offered our expertise to the entire world, including the Japanese, but they didn’t use it properly. Few people thought there were a lot of nuances, which we learned the hard way to navigate around.”

“It’s all far from being black and white. Keep in mind that in practice the reactor’s design and safety systems did work perfectly after all,” said Professor Atanas Tasev, an energy expert with the NGO Bulgarian Nuclear Forum (Bulatom) in remarks on the accident at the Japanese Fukushima nuclear power plant. Although built using very outdated technology, the plant withstood the earthquake. All the same, the plants are designed to resist even such a powerful earthquake. As a matter of fact, what happened was a so-called beyond-design event: They had a dam 2.5 metres high but the tsunami wave measured ten metres high. Such an event was unlikely. This has no direct relation to nuclear power plant safety. But there is a law of necessary diversity that states that if there’s a theoretical possibility of something happening, it will happen.”

“So the European Commissioner for Energy [Günther] Oettinger called a meeting where it was stated that Europe would not abandon the use of advanced nuclear technology,” he said. “Stricter rules of operation for older power plants will simply be introduced. That’s why I forecast that many plants that won’t manage to prove that they would be able to carry on their operations will have to be shut down. And this will mean that, first of all, new plants will have to be built, because new technology is a thousand times safer than the one used for the construction of this American reactor 40 years ago. So this doesn’t mean that the nuclear power industry won’t develop. It will continue developing, but amid a stricter approach to safety of power plants under construction.”

“Most importantly, nuclear power specialists are now a closed caste that is self-sufficient in terms of information, finances, etc. I believe that it’s necessary for them to open up more to the public, to take up a more active stand, to explain nuclear power plants’ risks and opportunities. Because, even though planes crash, people still fly them. And although mankind wants to live in an ideal environment, this requires a functioning economy, and to supply basic electricity that doesn’t depend on climatic conditions, that is insensitive to international quotations or hydrocarbon prices, we have nuclear energy. Moreover, power plants using natural resources will have to pay CO2 contamination levies effective 2012. So we have to address the public and reassure them, although this won’t be easy now. But we should make an effort.”

“I believe the current situation will lead to shutdowns of power units with first-generation reactors, which will be subsequently replaced with third-generation reactors. Scientists have been proving that the life cycle of first-generation reactors may exceed its established length. But it looks like things will become very tough from now on. It will be similar to the first four units of the Kozlodui [nuclear power plant.] While they are reliable technically, economic considerations will take the back seat to politics, and politics are contingent on public opinion. It looks like money will need to be spent to start financing and to operate this new generation of reactors.”

The situation at the Fukushima atomic energy plant is serious, but plant personnel have got it under control. In the reactors, by our estimates, destruction of exposed heating elements has occurred. But this is not at all what they call a “meltdown”. If that had happened we would be seeing a completely different radiation picture at the site and outside it. What happened at the Fukushima reactor resembles more closely the accident at the Hungarian Paks atomic energy plant than the one at America’s Three Mile Island. As for the structural peculiarities and the date of the construction of the first power-generating units with General Electric reactors, that is another question. At that time requirements for safety and for protection from outside forces really were not as strict as they are now. The power-generating units at Fukushima were capable of withstanding three-meter tsunami waves, but these waves were ten meters high. In other words, this was an outside-design accident. The plant was subjected to the effects of elements that were never planned and not included in the design. I am referring to the powerful earthquake (almost 9 on the Richter scale) that occurred in the immediate vicinity of the atomic power plant with aftershocks and then, before anyone knew what was happening, the tsunami…

Nuclear plants in the seismic zones