The Cherdyn region: Shadows of the Romanovs 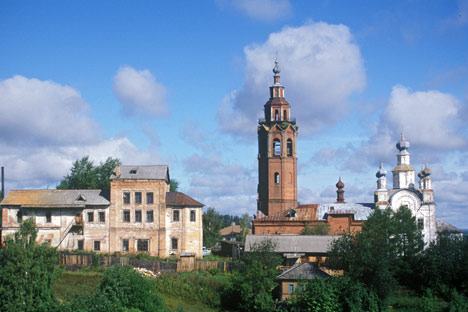 Early Russian history was made in this northern part of the Perm territory.

References to the final agony of the Romanov dynasty are usually associated with Ekaterinburg and the Ipatiev house, where Nicholas II and his family were murdered in July 1918. Yet the dynasty had long been linked to another sacrifice, which also took place in the Urals—the exile of the boyar Mikhail Nikitch Romanov, by Boris Godunov in 1601 to Nyrob. This distant settlement was founded in 1578 in the northern part of the Perm district. There, Mikhail Romanov was kept in an earthen pit, where he died the following year from the harsh treatment mandated by Godunov, who saw the Romanov family as potential rivals to the Russian throne.

However, Godunov’s own days were numbered. After his death in 1605, Russia was plunged into a devastating dynastic crisis known as the “Time of Troubles.” Although its consequences lingered for decades, the crisis formally ended in 1613 with the enthronement of Mikhail Fyodorovich Romanov, the nephew of Mikhail Nikitich.

The Romanovs almost immediately endowed Nyrob and the tortured death of Mikhail Nikitich with sacred significance in their ascent to dynastic authority. Although a number of the structures commemorating Mikhail Nikitich in Nyrob were destroyed during the Soviet era, the Church of Saint Nicholas (1705) still stands as one of Russia’s most flamboyantly decorated temples.

Nyrob is just one example of the little-known historic sites in the picturesque Cherdyn area of the Perm territory, one of Russia’s largest administrative regions. Cherdyn itself was settled perhaps as early as the 9th century, and Russians (and Orthodox missionaries) moving into the area by the 14th century. The Cherdyn region did not come under the control of Moscow until the 1470’s, and the area continued to be subjected to Nogai raids until the conquest of Kazan by Ivan the Terrible in 1552.

Through the 16th century, Cherdyn was a gateway for Russian settlers crossing the Ural Mountains to the east. Situated on the right bank of the Kolva River near its confluence with the Vishera, Cherdyn controlled river passage in several directions: to the north, via the Kolva River, to the Pechora basin; to the south, via the mighty Kama River, to the Volga and Moscow; and to the east, via the Vishera, to the Ob River basin and Siberia.

At the turn of the 17th century, a more direct Siberian route via Solikamsk undercut Cherdyn’s strategic position. Nonetheless, it retained regional commercial significance, as reflected by its large churches and merchant houses. The oldest surviving monument is the Church of St. John the Divine, rebuilt at the beginning of the 18th century, with a splendid, miraculously preserved icon screen.

In 1913 the Romanov tercentenary celebtrations released a flood of state largesse to the region, that resulted in new buildings such as the regional hospital. It was here that the poet Osip Mandelstam and his wife Nadezhda spent his few weeks of Cherdyn exile in 1934. This sad fact—and the poet’s attempted suicide--are noted by a memorial plaque.

Surrounding Cherdyn are small towns and villages whose names are rich with consonants: Vilgort, Kamgort, Pokcha, and Pianteg on the Kama River, with its archaic Church of the Epiphany—perhaps the oldest wooden structure in the Urals, built according to some sources as early as the late 16th century. Each of these settlements has its own monuments, often in a state of disrepair, but nonetheless picturesque. And to the south is Solikamsk (“Salt on the Kama”), whose array of stunning churches can be viewed here. From Solikamsk to Cherdyn to Nyrob, the historic towns of the northern Perm region form an enchanting itinerary for the intrepid traveler.