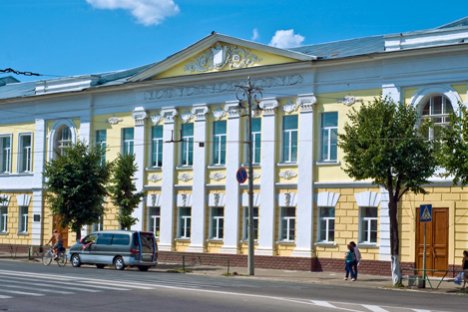 The churches constructed by Andrei Bogolyubsky and Vsevelod III are monuments to Vladimir's power in the 12th and 13th centuries.

The ancient city of Vladimir, located on the Klyazma River 118 miles northeast of Moscow, is today an industrial and administrative center of medium size. Yet from the 12th through the 13th centuries, it was the leading city of the territory that would become Russia’s heartland.

The date of Vladimir’s founding is usually given as 1108, the year in which Grand Prince Vladimir Monomakh of Kiev established a fortress on the site and consolidated his hold over the nearby lands of Suzdal. As with so much in medieval Russian history, this date is now contested, and some argue that the settlement was actually established over a century earlier, at the end of the 10th century.

By the 1160’s, Prince Andrei Bogolyubsky made Vladimir the center of his vast domains in the northeastern part of medieval Rus. The town’s political and economic power was soon reflected in a series of imposing churches of “white stone” (a type of limestone). The earliest of these is the Cathedral of the Dormition of the Virgin, one of Russia’s greatest architectural monuments. The Dormition Cathedral (1158-60) was the first major church commissioned by Andrei Bogolyubsky in Vladimir itself. Located with the extensive town citadel, or kremlin, it conformed to a design typical of such structures in Kiev and Novgorod during the same period. Yet the building material—smooth, cut stone—was especially characteristic of Vladimir’s architecture in the 12th century.

After a fire in 1185 that destroyed much of Vladimir, Prince Vsevolod III, half-brother of Andrei Bogolyubsky, ordered the rebuilding of the severely damaged Dormition Cathedral. Vsevolod's builders retained the fire-weakened walls of the earlier structure as the core of the cathedral and added aisles on the north, west and south sides. On the east the apse, which contains the main altar, was completely rebuilt with a substantial increase in depth. The new walls were raised two stories, but not to the full height of the original structure. The relation between the old and the new was thus clearly defined. In effect the new structure, completed in 1189, enclosed the earlier one in a brilliant display of engineering skill.

The exterior walls are marked at mid-level by an arcade frieze, but relatively little carved ornament. The walls themselves possess a sculpted quality and culminate in a curved roofline outlined in decorative metalwork. The most noticeable change in the design of the new cathedral consisted of four additional cupolas at the corners. The rebuilding of the Cathedral of the Dormition produced one of the largest masonry structures in medieval Rus. As the center of religious authority in the large domains of Suzdal, the cathedral also represented a monument to the power of Vsevolod III and to the cultural renaissance that he fostered.

Soon after the rebuilding of the Dormition Cathedral, Vsevolod commissioned for his own use a church dedicated to St. Demetrius of Salonika. Built between 1193 and 1197, this structure is smaller than the Dormition Cathedral  and is similar in plan to the churches built in the 1160s by Andrei Bogolyubsky at his palace compound in nearby Bogolyubovo. The profusely decorated building has an arcade frieze separating two tiers, the upper of which is covered with carved stonework.

Another highly visible structure from the 12th century is the Golden Gate, originally complete in 1164 by Andrei Bogolyubsky to serve as the main entrance to the medieval city. Indeed, it still stands at the head of Moscow Street, the main thoroughfare of Vladimir’s historic center. Although the Golden Gate has been substantially modified over the centuries, its massive limestone core remains. A church dedicated to the Deposition of the Robe of the Virgin,is situated on a terrace above the gate arch, a practice typical in the early medieval period.

Other ancient monuments in Vladimir include the Convent of the Dormition, founded at the turn of the 13th century and often referred to as the “Princess Convent” in honor of its primary patroness, Maria Shvarnovna, wife of Vsevolod III. Its main church, dedicated to the Dormition, was rebuilt at the turn of the 16th century. This remarkable structure has been returned to the Orthodox Church, and the area around the convent is beautifully maintained.

The medieval flourishing of Vladimir was cut short in December 1238, when the Mongol army defeated Russian forces and laid siege to the city. Captured with great loss of life, Vladimir never regained its former power. With the expansion of the Muscovite state, Vladimir receded to secondary status. Yet the greatest of its ancient monuments survived and were complemented over the centuries by additional churches in a variety of styles. Despite losses as a result of anti-religious policies during the Soviet era, the surviving monuments grace each part of the city.

Historic Vladimir also has large areas dating from the 19th century. With Russia’s economic expansion in the late 19th and early 20th centuries, Vladimir gained many new buildings in all areas of secular society. Some of the most interesting examples are in the floridly decorated “Russian Revival” style, such as the former City Duma (council) Building and the Local History Museum. New churches also arose, including the Catholic Church of the Rosary, built in 1892 not far from the Golden Gate. This brick Gothic Revival structure is one of Vladimir’s many houses of worship now restored to active use.

Like most Russian cities, Vladimir was deeply impacted by the cataclysms of the 20th century. Nonetheless, its enduring cultural legacy—and its architecture in particular—represents a treasure whose meaning and artistic importance transcend all national boundaries.