Omsk: Garrison city on the Irtysh 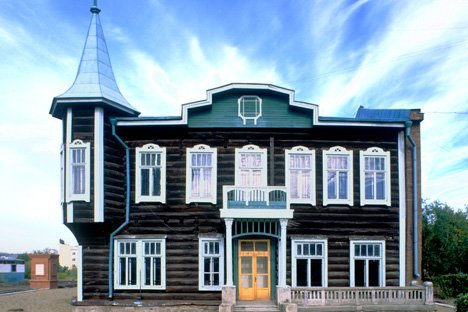 The Siberian city of Omsk is rich in history and architecture from its founding in the 18th century through the Russian civil war to the present.

Omsk, currently a city of around 1 million, was founded in 1716 as a fort on the middle reaches of the Irtysh River.  During the 18th century, its primary purpose was to protect Russia's southern border and establish authority over the aboriginal steppe tribes.

Although administratively subordinate to Tobolsk throughout the 18th century, Omsk gained increasing power in the 19th century.  From 1808 until 1917, Omsk served as the headquarters of all Siberian Cossack troops, and in 1822 a separate Omsk Province was formed. Shortly thereafter, construction began on the Cossack Church of St. Nicholas (1833-1840), based on a plan by the noted Russian architect Vasily Stasov.  The St. Nicholas Church, which has been splendidly restored, became the repository of one of the area's great relics, the banner of Yermak, cossack conqueror of Siberia

This strong military presence also connected Omsk with the notorious Siberian exile system.  The most famous of the fortress's exiles was the writer Fyodor Dostoevsky, condemned in 1849 for associating with the "radicals" in St. Petersburg.  In January 1850 Dostoevsky arrived under guard at the Omsk fort, and for the better part of three years (1850-54), he lived the harrowing existence of a convict sentenced to hard labor, which included unloading barges on the Irtysh River. When his health broke under the physical and psychological strain, Dostoevsky was hospitalized under the care of a sympathetic medic.  It was during his stay in the infirmary that Dostoevsky began the writing of one of his seminal works, “Notes from the House of the Dead.” A few buildings still survive from that time, including one of the fortress gates, a few warehouses, and the hospital.

During the latter part of the 19th century, Omsk began a period of heady expansion, as the town became a transportation center for Russia’s vast interior. Regular steamboat service along the Irtysh River to Tobolsk began in 1862, but it was the railroads that made Omsk a boomtown. In 1894-95 Omsk was linked by the Trans-Siberian Railroad to Chelyabinsk in the west and Novonikolaevsk (later Novosibirsk) in the east. In 1913, another rail line was completed from Omsk to Tyumen in what would become the new Siberian mainline. By the beginning of the 20th century, the population of Omsk had tripled, to over 60,000 inhabitants.

This development as a transportation nexus led to a surge in the city's commercial district.  What had formerly been a provincial garrison town consisting primarily of wooden structures punctuated with several large churches now became a preeminent site for banks, educational institutions, industry and retail trade in Siberia.  In addition to branch offices for major banks and firms in Moscow and St. Petersburg, Omsk received investment from companies in the United States, Germany, and Great Britain.  The central part of Omsk had structures whose design rivaled Moscow's business district. Many of the new commercial buildings were built in styles derived from the Florentine Renaissance.

During the First World War, strategically located Omsk grew still further, and by 1917 the city’s population reached 100,000. Following the October Revolution, Bolshevik power was proclaimed almost immediately; but with little local support, the Bolsheviks were driven from the city in June 1918. Opposition to the Bolsheviks was fatally divided, and in November 1918, a military coup installed a dictatorship headed by Admiral Alexander Kolchak (1874-1920), who was a renowned polar explorer and gifted naval commander, but incapable of dealing with the chaos of the Russian civil war. For almost a year, Omsk could be considered the “capital” of the White forces, and the mansion where Kolchak had his headquarters is a prominent landmark. In November 1919 Kolchak’s forces were driven from Omsk. In 1921 Omsk became one of the centers of the American Relief Agency during the terrible Volga area famine.

With its economy shattered and the countryside still in chaos, Omsk struggled through the 1920s, only to achieve some industrial growth in the 1930s. Like many Siberian cities, it expanded rapidly during the Second World War, both as an evacuation haven and as a center of transportation and production.  Major development of the city’s military-industrial complex continued after the war, and by the end of the 1970s, the city's population exceeded 1,000,000—a benchmark of major significance. Omsk also became a center of the oil and gas industry.

Despite the social dislocation and contradictions of post-Soviet Russia, contemporary Omsk remains an important economic and industrial center.  It has a strong university (opened in 1974) and one of the largest regional libraries in Siberia. The city's expansion has occurred along the Irtysh River, thus creating a stretched plan with large distances between the various districts. Construction began on a subway in 1996, but work has been delayed, and the first line is not scheduled for completion until 2017. Omsk also has an international airport near the city center. The building of a new airport at a safer distance outside the city is proceeding slowly.

Fortunately, the historic center is rebounding, with its early 20th-century commercial district of imposing offices and shops.  There is a lively club scene, as well as a number of large theaters.  Omsk also supports diverse religions.  In addition to reopened Orthodox churches, the city contains a synagogue, mosques (the administration of the Imam of Siberia is in Omsk), and a large Baptist church, to list only a few. The reconstruction of the city’s main Orthodox church, the Cathedral of the Dormition (built in the 1890s and demolished in 1935) was completed in 2007.

Omsk continues to face the challenges of uneven economic development. But with proper investment and management, this Siberian powerhouse is poised to combine new levels of prosperity with a thriving cultural and intellectual life.