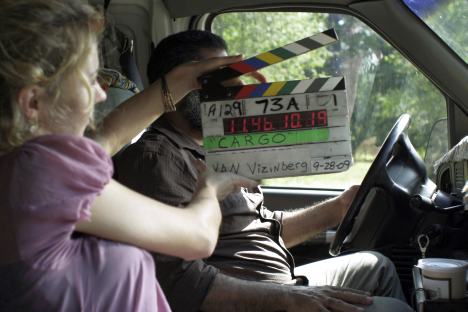 The producers of “Cargo” hope to fund the film’s release through Kickstarter. Source: Press service

In the compelling scene from the independent film, “Cargo,” the protagonist, Natasha, is bound with silver duct tape to the front passenger seat in a filthy van--after spending at least 24 hours in a small cell in the back. The viewer has already endured Natasha’s ordeal as a prisoner of traffickers, and seen her beaten and humiliated on her brutal journey from the Mexican border to Brooklyn.

Interview with the director of the film

She fought back every step, and created enough of a ruckus in her cell that the driver, an Egyptian transporter named Sayed (Sayed Badreya) has put her in the front. She plaintively begs him for her freedom, recalling that all she ever wanted was for her friends and family to see her on TV, or in film, and be proud: “Wow, there is Natasha from Irkutsk.”

“Cargo” is a dark road trip and ultimately, a story of redemption, but it offers up a wrenching portrait of human trafficking in the United States along the way. According to the filmmakers, 17,500 women are trafficked into the United States each year. Hundreds of thousands of young men and women are virtual sexual slaves behind our streets. “Cargo” is a product of New-York based Persona Films and was co-produced by Chris Cooper, whose documentary, “Living in Emergency,” about the group Doctors without Borders, was nominated for an Academy Award last year. His partner, Abigail Honor, produced the documentary “Saints and Sinners,” about gay Catholics struggling to be faithful.

The film, which will have its New York premier at Quad Cinema in Greenwich Village on October 21, is a powerful work in search of an audience. With 45,000 films created each year, and only 600 of them reaching U.S. cinemas, Russian director Yan Yizinberg knows that even after two years on the project, his work is still ahead of him. “Cargo” was shown in Washington, D.C., last month and will hit the festival circuit. But the goal is to release the genre-defying, independent film in theaters without a distributor.

“Cargo” also introduces Russian actor Natasha Rinis in a startling performance. Her character (also Natasha) is lured from Russia to Mexico by gangsters posing as Hollywood agents. She fights her fate with almost every breath. She bites, kicks and screams and tries to escape multiple times. Her struggle against her abject humiliation is transporting at times. At one point it appears that her driver-- played with an eerie poignance by Sayed Badreya, a veteran of commercial films such as “Ironman”--might kill her, he is so enraged. But instead the journey takes off in a new direction.

Reached by phone in Cyprus, Natasha Rinis said she has not yet seen the film. “It was really intense and hard to go back to it,” she said. “My job was to make it as realistic as possible, and I had a very hard time getting out of that process.” Rinis said she will attend the New York premiere.

Rinis was born in Moldova and lived there until she was 13. She moved to New York in her twenties to become an actress. “Basically I have seen and heard a lot of things in my country. People take advantage of you and your limited human rights.” During the filming, “it was hard for Sayed and I to sit and talk, or have coffee, the internal conflict between the characters was so deep. The scenes we did were hard enough.”

The film explores the indifferent environment that allows human trafficking to exist; it also looks at the fact that many of the girls who are trafficked to the United States come from Russia and Eastern Europe. It is a film striving for a teachable moment, but any success it may achieve will draw from its success as dramatic fiction.

Yan Vizinberg, the director of “Cargo,” grew up in Moscow. He started out as a reporter for NTV Television after attending film school at Boston University, and it was his work as a reporter that led him to the story of trafficking—a trafficker called him from prison in Arizona. He told Vizinberg he was just an entrepeneur bringing singers and dancers into the United States. The FBI had it all wrong, he said.

According to Vizinberg, “The man in prison said, ‘Just google my name and you can see all the articles.’ I saw that he was beating the dancers in his clubs and taking their passports away. I asked him about it, and he said, ‘Well in show business that’s okay because I am investing in bringing them over here…you have to remind people who they are and who is the boss.’  I had never heard of human trafficking before, but I said, ‘For sure you are a human trafficker.’ This piqued my interest.”

The 36-year-old director is determined to see his film released in some theaters, and to do this independently, the production team has initiated a Kickstarter campaign (kickstarter.com). Kickstarter is a popular and competitive funding platform for creative projects, some of which have had success with small, grassroots donations. The producers hope to make enough money to fund a theatrical lease in art-house cinemas in strategic cities.

“We spent two years making the film; at that point we did not want to give it away to a distribution company that most likely will release it only on DVD,” Vizinberg said. “It is a heavy topic, it’s not an independent romantic comedy. … We managed to make the film independently; why can‘t we release it independently?”

The production team also hopes to take the film to Russia. “We would love to show this in Moscow,“ Vizinberg said. “Human trafficking is a huge problem there as well. “