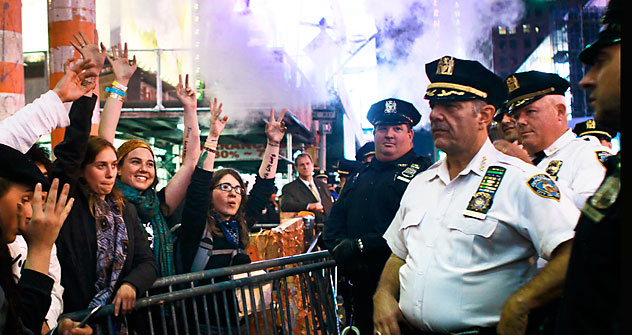 On Oct. 15, hundreds of thousands of people in more than 80 countries took to the streets in what may be the largest biggest public protest action in modern history. The demonstrations were inspired by the Occupy Wall Street movement – a crusade against “corporate greed,” unemployment and the role that governments in major European governments and the United States have played in the global financial crisis.

In their creative pursuits, science fiction writers would often describe a not-too-distant and not-too-bright future with riots raging in the streets of global capitals, participants vandalizing the cities and clashing with police. On Saturday, these visions became reality in three different major cities: New York, Rome and London.

The scenario was much the same in all the three capitals: Although the protests started out as peaceful demonstrations, they quickly turned violent, resulting in fights with the police and dozens of protesters arrested. The protests differed slightly, though, in tone and the scale of the damage they inflicted. This time around, the Italians turned out to be the most violent.

Experts are concerned, however, that the events of the past weekend could be a rehearsal for future actions, possibly around the next G20 summit, scheduled for Nov. 3-4 in Cannes, France.

The actions of the Occupy Wall Street movement have been extensively covered by the Russian media. RBTH is pleased to provide a selection of two opposite views on the recent developments.

People have become aware of the ineffectiveness of democratic institutions – their inability to protect the interests of those who elect them – while governments dance to the music of money. Worse still, nothing can be done about it, since any attempts at organization by the public are immediately quashed by the powers that be, which have sufficient resources at their disposal to bully or buy any group leader, or put any organization under financial or administrative control.

In their offensive against Wall Street, the movement’s participants repeatedly stress that they are not simply protesting against the unfairness of some people being rich while others are not. On the contrary, their chief concern is the current state of affairs, in which bankers and financiers rule the world and the system prevents all other participants from challenging this order from within. They even seem to have made this simple idea clear to most of their supporters.

Aside from personal issues, which protesters eagerly share with the public in their televised interviews, almost all of them have, in one way or another, spoken of the government and its institutions falling under the influence of those who can pay while the existing form of representative democracy fails to express the will of the people. The obvious conclusion is that the existing world order needs to be changed. We need a different democracy, a genuine one.

If the situation deteriorates, the revision of traditional perceptions will continue. If the crisis abates, however, and the ruling classes manage to find the opportunity and resources to adjust their policies, the protesters might return to their daily lives and forget their visions and predictions right away. After all, it is only natural for people to gravitate toward a normal life, and not fight at the barricades.

Either way, they will never be the same, because the very emergence of the Occupy Wall Street movement, as well as protest actions involving thousands of people across the United States and Europe, point to a considerable shift in the mentality of contemporary society.

The last thing we need is advice from pampered idle hipsters

While my left-wing liberal-minded colleagues have rushed to announce a new global phenomenon capable of causing governments and mega-corporations to listen to the public, I, for one, can see nothing particularly new here. Most of those who have taken to the streets in western capitals are the same people we have seen every time G8 meets over the last 20 years: anti-globalists, radical environmentalists, pacifists, America-and Israel-haters and, to top it all, Marxists and Trotskyites. The struggle for state control over the banking system is nothing more for them than a pretext for breathing new life into the agenda that seems to have been buried with the downfall of the Soviet Union.

A considerable proportion of the group consists of the young offspring of wealthy parents who can afford to look for a purpose for their lives until they turn 40 or so. They tend to migrate from one radical movement currently in vogue to another. As a rule, they have no problems with banks and, even if they do, their parents usually come to the rescue. A smaller proportion of the protesters have never, as John Le Carré felicitously put it in his book “The Spy Who Came in from the Cold,”been inside a bank and are hardly likely to go there at any point in the future.

This does not seem funny to me. It is not funny when they call the squares of European cities “our Tahrir,” because people in Egypt died for the right to live with dignity and not for the right to remain idle until near retirement age. It is not funny when demagogues and hopeless misfits speak out in the name of the public, because we know from the experience of the Soviet Union and Germany what tragic results this might have. It is not funny because they suggest dealing with history’s first postindustrial crisis of globalizing society in line with what Bulgakov’s Sharikov suggested: “Take everything and divide.”

I am neither an economist nor a financier and I will not offer my vision of a way out, since I am not as self-assured as those rioters from Rome or leftists contaminating the center of New York. One thing I do know: The last thing we need is advice from pampered idle hipsters in search of exciting adventures.