A new Eurasian union is born 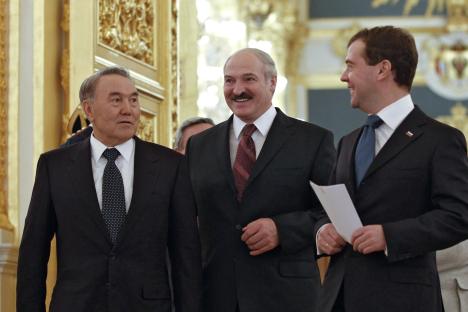 The creation of the Common Economic Space (CES) has begun. On November 18, the presidents of Russia, Belarus and Kazakhstan signed an agreement for the establishment of a central integration body for the three countries, the Eurasian Economic Commission (EEC).

The structure of the EEC is similar to the European Union, with its European Council and European Commission. The EEC will have two tiers. The upper tier, its council, will include the deputy prime ministers of the three countries, with First Deputy Prime Minister Igor Shuvalov representing Russia. The lower level, the board, will be the EEC’s main working body, with decision-making powers over customs duties as well as sanitary, veterinary, and immigration control. It will also oversee the allocation of industrial and agricultural subsidies. Viktor Khristenko, Russia’s industry minister, is the appointed head of the EEC.

“We have taken a new and very powerful step on the path to forming a Eurasian Economic Union (EEU), an alliance which will undoubtedly determine the future of our countries,” President Medvedev said, adding that the agreement allows the three countries to establish the CES and then the EEU, possibly before 2015.

The EEC leaders are keen to avoid the mistakes of the European Union. The Russian president believes that the EEU will avoid the problems of the eurozone because its members, “starting out from a more or less level economic playing field”, share common history and have rapidly growing economies – meaning they are less likely to become a fragmented conglomerate.

Nursultan Nazarbayev, the Kazakhstan president, said “the union of three” will become “the most powerful” alliance, with “the combined GDP of the three countries approaching $2trn.”

Alexander Lukashenko, the Belarus president, assured the audience at the signing that “these documents will be ratified as soon as possible and will go into law in our country.” Experts see the EEC’s establishment as an extremely important development and a triumph for Russia, as well as for its partners in the commission, Belarus and Kazakhstan.

Political analyst Sergei Markov said: “The signing is a very important step forward and an extraordinary success.” He believes it is part of a new trend towards integration, which is important in light of the threat of a new economic crisis, as it will help all three countries greatly reduce its possible impact.

“We will have more opportunities to combat the crisis by relying on our domestic market,” he said.

An analysis of existing economic trends in the post-Soviet space shows that the business communities of all three countries have already been actively implementing integration plans. “The main advantage for our countries’ companies is the elimination of customs barriers, which will not only lead to direct savings on customs fees, but also to indirect benefits from the removal of bureaucratic obstacles, and accelerate trade between the member countries of the future union,” said Aleksandra Lozovaya, the head of research at  Vector Securities, an investment company.

For example, the Russian company Eurochem plans to invest $2bn in a large-scale project it is actively pursuing in Kazakhstan. The project involves developing phosphate deposits in the Karatau Basin in southern Kazakhstan, and building a mining and processing plant in the city of Zhanatas, as well as production plants for phosphate, nitrogen, and mixed fertilisers in Karatau with a combined capacity of more than one million tons annually.

In another example of business integration, Lukoil is successfully operating in Kazakhstan and Belarus. Kazakhstan projects make up 40pc of the largest Russian oil company’s overseas reserves. In addition, more than half of its investments in foreign upstream projects are in Kazakhstan.

This autumn, ZAO Atomstroyexport (SC Rosatom) and SA Nuclear Power Plant Construction Directorate (Belarus) signed a contractual agreement to build Belarus’s first nuclear power plant. It will be built in Astraviec in the Grodno region, where preparatory work has already begun. Belarus will thus acquire a reliable and stable source of energy, which will to some extent help it solve its power supply problems. According to Lukoil’s CEO, Vagit Alekperov, one of the main tasks of the governments and the business community, as part of the integration process is to harmonise legislation, and to lift national as well as international legal and administrative barriers.