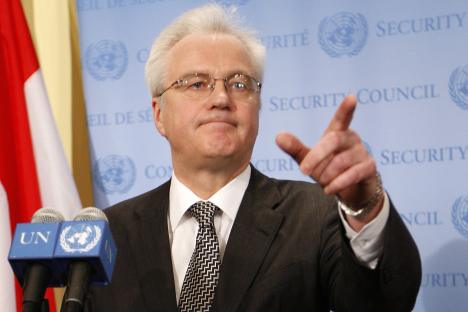 Russia's UN ambassador Vitaly Churkin argues that the UN Security Council can be expanded when it has thorny international issues resolved. Source: Reuters

Russian ambassador to the United Nations Vitaly Churkin told RBTH about the possibility of the UN Security Council's expansion and the most controversial international issues that need to be resolved to bring stability in the world.

Vitaly Churkin has been ambassador of the Russian Federation to the United Nations since 2006. As he begins his presidency of the Security Council this month, Churkin sat down with Jean-Louis Turlin of Russia Beyond the Headlines about life and politics inside the United Nations.

Russia Beyond the Headlines: Russia abstained on the resolution to authorize action against Colonel [Muammar] Gaddafi’s forces in Libya, but opposed efforts by the Security Council to end the repression in Syria. How do you explain the differences between the two situations and Russia’s response to them?

The Short Road from UN Resolutions to Regime Change

Vitaly Churkin: The two situations are different. When we were taking that vote on resolution 1973, Gaddafi was coming out with various threatening statements with regard to the population of Benghazi. And there was a real possibility of a blood bath. We’d already had the experience of his tough measures towards protesters, which led to the adoption of the previous resolution, 1970, roughly a month before the abstention, which sent his case to International Criminal Court. So when it came to protecting the population, Russia came up with a clear signal: Having supported 1970, let 1973 pass, even though we had serious concerns that that resolution might lead to excessive use of force.

Now, what happened in Libya in reality impacted quite seriously on our thinking on Syria and led to our veto, together with China, of a resolution on Syria. And it’s a very serious issue which needs to be thought through very carefully in the Security Council, because what we see based on the experience of Libya and also, in a different context, in the case of sanctions against Iraq, is that we have a new phenomenon in place, where Security Council resolutions are simply regarded by some countries as a trigger.

In the context of Syria, we saw a draft resolution, which contained no particular strong sanctions against Syria, but which was leading the Security Council and the international community in the direction of confrontation with Syria and within Syria, fanning also confrontation within Syria itself. How different was that situation from the situation in Libya? The political dynamic was different. In Syria, there were large peaceful protests in some parts of the country, but there was also violence used against government institutions, and that tendency was increasing as events started to unfold. Russia has held continuous talks with the Syrian authorities, the Syrian opposition and called on all members of the international community to push Syrians towards dialogue, because there, we believe, dialogue is possible, we believe that in order to start dialogue, the people who really want change in Syria need to dissociate themselves from violent extremists and the international community must call on everybody to enter into dialogue.

We do not accept the premise that somehow the Assad regime cannot change, that there cannot be progress under that regime.

RBTH: Is Moscow ready to reconsider its opposition to U.S./European resolutions against Damascus, as Bashir El Assad does not seem prepared to heed the Arab League’s call for an end to the repression?

V.C.: We think that one should not underestimate the statements the Syrian authorities made about political reform, the steps they are taking in terms of political reform, and indications about readiness to change the constitution, including dropping the political primacy of the Baath party in Syria. Those are serious political commitments, and they need to be carried through, but in order for that to happen, there needs to be dialogue within the Syrian society. That was the reason behind our veto based on our analysis of events.

We hope that the Arab League can play an important role there, even though, in my view, the policy, the statements of the Arab League towards the Syrian government could be more consistent. Sometimes they were trying to do positive things but then they were influenced by negative reactions from some Western capitals who were hastily proclaiming the Arab League initiative dead or openly advising against the opposition accepting the offers by the Syrian authorities for dialogue.

V.C.: No, they are not ignoring them. They have responded. The Syrian government came back with some amendments as to the way the monitors should operate. We believe that, generally speaking, in such situations, the international community should be consistent in its support of a political outcome through dialogue rather than stirring up more domestic trouble.

RBTH: So Russia believes that the problem can still be resolved through dialogue and is therefore not prepared, at this stage, to reconsider its position.

V.C.: I cannot foresee all the possible scenarios. But if dialogue fails, first of all, we need to be concerned not with Russia’s position, but with the fact that Syria may plunge into civil war.

RBTH: Similarly, what could alter Russia’s opposition to a tightening of sanctions against Iran following the latest International Atomic Energy Agency (IAEA) report?

V.C.: We are still analyzing the latest IAEA report. However, at first sight, it did not add anything to the general knowledge of allegations about Iran. Unfortunately, it was played up as a major PR exercise when media started quoting from it well before it was published, and then it was leaked from IAEA.

From the outset, it was clear that the intention was to use it for some psychological and political gain rather than in order to deal seriously with the situation in Iran. Nevertheless, I think it’s very encouraging that after the publication of that report, the IAEA managed to pass a resolution of its Board of Governors, which was sponsored by all the members of the group of six countries that are negotiating with Iran, including Russia. The resolution called on Iran to strengthen its cooperation with IAEA and reemphasized the intention of the international community to continue negotiations with Iran.

Now, speaking about the possibility of new sanctions against Iran in the Security Council. The answer is no. There are two reasons, as far as Russia is concerned. One reason is that we are a country of principles. From the outset, when we went into discussing of various resolutions against Iran, we said that the sanctions should be focused on their nuclear program and their missile program, focused on constraining the actual threat which can emerge if it goes in the wrong direction. Sanctions should not affect the economic and social aspect of the situation in Iran.

And then there is another reason. Here we come back to the situation when Security Council resolutions are used simply as a trigger. What we have seen in the case of Iran is that those adopted resolutions were used to unilaterally impose sanctions by the United States and the European Union, while some of those sanctions even have extraterritorial significance in trying to place limitations on other countries in their dealings with Iran. As a matter of principle, we think that this is wrong. If we agree to work together and we agree on certain sets of sanctions, we should stick to them.

RBTH: But is the Russian Federation concerned by the potential risk posed by a nuclear Iran?

V.C.: This was something that made us work together with the international community. Of course, the prospect of Iran acquiring nuclear weapons would deal a very serious blow to the Non-Proliferation Treaty, and would create serious regional strains. This is something we are trying to prevent but we believe that the only way to really prevent that is through diplomatic engagement and looking for political solutions.

RBTH: What is the Russian position on the Palestinian Authority's application for membership in the United Nations?

V.C.: The Soviet Union recognized Palestine back in 1988; they have an embassy in Moscow. We have absolutely no problem with recognizing Palestinian statehood. I must say, it was an interesting situation because after application, many people suspected that it would turn into a very acrimonious issue in the Security Council. In fact, it turned into quite a harmonious issue, because even though the substantive positions of countries were different in terms of how to handle the issue the views of members of the Security Council were surprisingly harmonious. And I think that our attitude was shared by everybody: the Palestinians are in the driver’s seat. If they want a vote, we’ll go for a vote.

RBTH: What are Russia’s views on the proposed enlargement of the UN Security Council?

V.C.: We think that it must happen, but it must happen in a way that will strengthen the Security Council and strengthen the United Nations. The worst thing that can happen to the United Nations is some kind of spiteful decision-making on the Security Council reform, which will split the United Nations. We are about to start the seventh round of intergovernmental negotiations on the reform of the Security Council. Unfortunately, political will on the part of the major players to come to this compromise may not be there yet. I personally believe that there is an additional factor these days: too much turmoil in the world. For a reform, I think, you need to see things settled a little better than they are now in international life.

RBTH: At the same time, the Security Council would be more effective in dealing with the situation if it were more representative. What is your view on new permanent members?

V.C.: There are very strong candidates. The problem is that there are also a number of very influential members of the international community who do not support the formula of new permanent members. We need to see in advance the whole picture. We need to know who these new permanent members are going to be, how they are going to be chosen, so it’s much more complicated, I can assure you, than it looks at first sight.

RBTH: So has Russia determined what countries could qualify as new permanent members?

V.C.: If in fact members of the international community are going to rally around a formula for new permanent members, clearly some candidates are going to be very strong – for example, our BRICS partners: India, Brazil, South Africa. But one of the problems is that there are others who want to become permanent members.