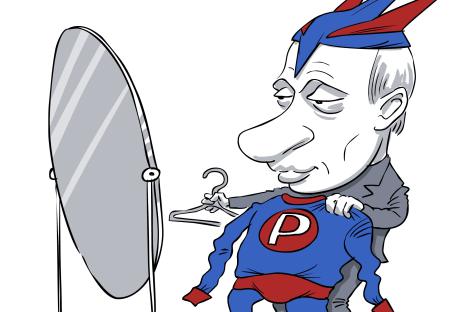 Will Vladimir Putin's election as Russia's president bring new defense alliances to life? Yevgeny Shestakov, the international desk editor of Rossiyskaya Gazeta, and Svetlana Babaeva, an analyst for RIA-Novosti US Bureau, discuss the political agenda of Russia's next president.

The election of Vladimir Putin as president of Russia may bring new defense alliances to life, but this does not necessarily mean a new Cold War, thinks Evgeny Shestakov. Read his opinion.

Just a week ago, it was easy to predict what foreign policy Russia would adhere to starting in the spring 2012, after Vladimir Putin’s inevitable return to the Kremlin as president.

Relationships with the United Stated would very likely become more complicated. The softer style of Dmitry Medvedev would be replaced by the habitually tough rhetoric of Putin. Since the main point of disagreement - the U.S. plans for the missile defense system deployment in Europe – remains unresolved and Moscow and Washington have not come even an inch closer in their attitudes, one could expect further steps from Moscow to keep the West wary for some time.

In general, we have seen that Putin is more inclined than Medvedev to take a negative stance on nearly every initiative, particularly regarding those countries of concern to the Western community. Iran, Arab countries, not to mention some Latin American regimes, would undoubtedly become a stage for strong disputes between Russia and the West.

Yet the circumstances turned dramatically on December 10, when tens of thousands came out to protest across Russia. The formal reason for these demonstrations was the result of the parliamentary vote on December 4. In reality, the spark was discontent over the whole course shaped and carried out by President and then Prime Minister Putin in recent years.  A new middle class has made it clear that the model Putin created in the 2000s has exhausted itself a decade later.

Today, the situation is not as predictable. In March, the nation will vote in its presidential election. The one and only favorite was Putin. Now things can change. It is unlikely that he will lose the presidential election, as no other candidate can garner enough support and confidence of the majority in such a short time. The key question is how convincing Putin’s victory will be and how many votes his opponents can rack up. This will define the legitimacy of all his future moves. Current forecasts no longer exclude a second round of voting--unimaginable just a week ago.

Therefore, only in summer, after the elections, when the new government team is named and the goals are put forth, will we know if Western pessimism was justified, or if the West will deal with a transformed Russia.

For the eight years of his presidency, Putin was known for his intractable approach. This was one of the main obstacles to Russia’s joining the Western community, and that’s why the more liberal Medvedev was warmly welcomed. He did not seek confrontation on every occasion. Despite how his presidential legitimacy and successes were belittled domestically, Russia’s foreign policy has accomplished significant results, compelling the West to treat Russia as a reliable actor in world politics.

This was foremost facilitated by Russia’s new position on Iran and its adoption of the U.N. Security Council resolution. One of the key decisions was the ban on the S-300 missile complex supply to Tehran imposed by Medvedev. Equally remarkable were the signing of the new START Treaty and an agreement on military transit across Russian territory to Afghanistan. Finally, there was a recent breakthrough with Russia’s WTO accession, which would not have been possible without the strong US and EU role in their dialogues with Georgia. Generally, we’ve seen a significant reduction in the overall level of hostility between Russia and the West during Medvedev’s tenure.

It would be too optimistic to expect the same from Putin. As President he used to operate in the model of permanent enemy. Western-style democracies and particularly the United States were viewed with hostility by virtue of the older Soviet mindset and newer political convenience. They kept trying, allegedly, to impose on Russia their democratic visions; to undermine Russian sovereignty; to draw it into non-lucrative economic concessions, while preventing Russian companies from acquiring Western markets.

Putin’s portrayal of Russia’s enemies or at least rivals was generally welcomed by the Russian populace with its strong tradition to seek out the origins of all troubles in external intrigues rather than in their own government. And with this, state rhetoric about Russia’s revival as a superpower was consistent with the aspirations of a majority, tired of the national humiliation in the 1990s.

Putin’s foreign policy would also look increasingly eastward. This does not mean that Putin’s team would completely neglect the western path. Even in crisis, Europe needs Russian resources and huge imports flow back to Russia. Finally, and this is an important factor in the bilateral relationship, the interests of Russian elites are concentrated there – their families live in Europe, their children study there, their homes and yachts are purchased there.

It’s not widely discussed but these ties are among the major deterrents in the minds of the Russian establishment. No one wants to find himself on a “Magnitsky list” that may prevent access to the West. These vital interests of the Russian elite guarantee that relations with the West remain workable.

Another direction of Russia’s foreign policy, assuming Putin’s return, would probably be toward Latin America. Russia is interested in its markets, and a number of regimes in the region seek to establish close economic ties with Moscow, particularly those needing military supplies with little access to Western manufacturers.

And certainly, the focus would be on the post-Soviet states, which Russia considers not only its economic partners, but also its zone of influence, even though 20 years have passed since the collapse of the united territory and the new reality requires more subtle tools in dealing with its neighbors.

These principal facets of Russian foreign policy, along with tougher rhetoric, thus, are part and parcel of Putin returning to the Kremlin. No wonder Western countries were pessimistically prognosticating about their relationship with the new old leader of Russia.

The role of foreign policy is secondary now, as happens in any country during an election campaign. However, this upcoming vote may have an impact on Russia’s entire political agenda. The situation is fragile and far from stable. So far, it’s not yet evident whether the authorities have realized the formidability of the public protests that were not only about instances of electoral fraud but about the fundamentals of the entire system built by Putin. The society anticipates change. Whether authorities are prepared for this is another matter.

Svetlana Babaeva is Senior Analyst for RIA-Novosti US Bureau.

Russia will look out for itself

The election of Vladimir Putin as president of Russia may bring new defense alliances to life, but this does not necessarily mean a new Cold War.

The tough anti-American statements made by Prime Minister Vladimir Putin recently as part of his presidential election campaign should not be seen as an indication that Russia is interested in pursuing anti-Western policies – only that Russia is interested in foreign policy positions that make sense to Moscow. Putin’s comments also indicate that the Kremlin will not tolerate interference in internal affairs – such as the criticism voiced by U.S. Secretary of State Hillary Clinton over the results of Russia’s elections even before the votes were counted and the opinions of supervisory missions announced.

Russian-German political analyst Alexander Rahr considers Putin a politician who is still interested in dialogue with the West and believes Russia’s future lies in closer ties with Europe. Rahr even titled his book on Putin’s previous presidential terms “A German in the Kremlin.” There are good reasons for believing this. One of Putin’s key foreign economic projects as prime minister has been the Nord Stream gas pipeline running across the Baltic Sea. Putin has also helped reset Russian-U.S. relations, which has led to the signing of a new treaty on strategic offensive weapons.

But at the same time, Russia criticized NATO’s involvement in the operations against Libya that helped oust Muammar Gaddafi. Putin has also repeatedly criticized the West for breaching the UN Security Council resolution and for openly supporting the Libyan opposition. The Kremlin interpreted NATO’s actions as violations against international law, but being part of the pan-European mechanism, it cannot come up with any independent solutions.

Europe, however, may not feel the same way. The reluctance of European countries to consider Russia’s concerns over missile defense are key to any assessment of Russia’ future relationship with the West. For decades, the only project in which Russia and Europe could have become real strategic partners is European missile defense. Yet, yielding to pressure from Washington, the European partners refused to cooperate with Moscow in this sphere. Refusal of the West to provide Russia with security guarantees regarding the deployment of the missile defense in Europe threatens Russia’s strategic interests.

Even so, Europe and the U.S. are unlikely to change from Moscow’s strategic partners into potential enemies. Rather, there will be a gradual reduction in certain non-core areas of cooperation, while the main tracks, including the fight against terrorism, drug trafficking, and transporting cargos to Afghanistan, will remain in place. Russia will continue to defend its geopolitical interests, but it will focus primarily on the regions it sees as its traditional areas of influence.

None of this means that, as head of state, Putin will build his foreign policy on confrontation with Washington. On the contrary, Moscow will continue to try to come to agreement with the U.S. on common international policy standards. Europe’s significant weakening and its self-liquidation as an independent global player will force Moscow to look for new approaches to the United States with a view toward avoiding any open standoff.

After Putin takes up the presidential post, it is likely that a stale standoff will resume between Russia and the United States, which will worsen if a Republican wins the next presidential election in the U.S. In this standoff, Moscow will rely on its Asian ties, also strengthening its cooperation with the BRICS nations (Brazil, India, China and South Africa).

If Putin wins the presidency, BRICS will become a key tool for promoting Russia’s interests. Even today, BRICS comes up with common political initiatives on a whole range of issues. The organization might also embrace new countries in Latin America and Africa interested in building a new geopolitical center capable of protecting their interests. Such a counterweight, supported by the resources of the world’s most dynamically developing economies and also having a powerful nuclear arsenal, will not allow the U.S. and NATO to continue applying the Libyan model and toppling undesirable regimes. At the same time, the expanded BRICS will not be openly opposed to American interests but will act as a serious restriction on Washington’s political ambitions.

It future, BRICS might turn into a military and political alliance with a common rapid response force and a system of mutual security guarantees.

Yevgeny Shestakov is the international desk editor of Rossiyskaya Gazeta.