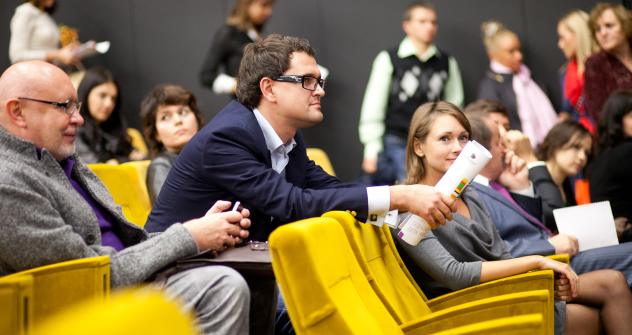 The Skolkovo Institute of Technology hopes to learn from the American institution's experience encouraging innovation.

On an unseasonably warm January evening in Moscow, an unusual group gathered at the capital’s elite Kvartira 44 club. Its usual clients are flocks of hipsters discussing new films or groups of actors from the nearby Mayakovsky Theater, but the young people who gathered at a table that evening were a very different lot. This group of 20-somethings speaking English and throwing around technical terms were members of the first group of Massachusetts Institute of Technology (MIT) students sharing their impressions of their trip to Russia. They were the trail-blazers of the exchange program between MIT and the Skolkovo Institute of Science and Technology (SkTech).

Patricia Gercik, Associate Director of MIT’s international applied education program recalls that exchanges of this kind began in the early 1990s. Japan, Germany, India, China, Korea and many other countries have taken part. And, at last, so is Russia. When asked what MIT hopes to gain from such cooperation, Gercik was a bit taken aback. “Well," Gercik began, “the International Science and Technology Initiatives [MISTI] aims to promote scientific and research ties across the world. Russia is an integral part of the modern technological establishment and the head of every such program dreams of having it on the list – especially since Skolkovo offers a chance to exchange experience not only in theory but also in practice, such as by sending our students on internships with Russian companies.”

Her answer sounded a big jargony. Maksim Artyomov, a Moscow State University graduate who is participating in the exchanges between MIT and SkTech, described his goals for the exchange more simply.

“I hope this stereotype will be broken,” Artyomov said. “When I did science in Russia, useful work was impossible without a constant search for outside funding. The money shelled out by the state and the infrastructure were clearly not enough for normal research. This gave rise to the cliché that scientific cooperation must yield immediate benefits. But that is not quite the case. The benefits accrue only in the long term. Exchange of knowledge must come first.”

The purpose of the joint SkTech-MIT program is to establish such exchanges. By 2014, the Skolkovo Institute of Science and Technology plans enroll it's first class. Between now and then, the institute will construct its curriculum and exchange programs. MIT is an important  model for ways future inventors and educational institutions can interact. One particular program SkTech hopes to emulate is a competition by which students earn grant money.

One exchange participant, Beracah Yankama, applied for a grant twice and failed both times. Yet he learned from the experience and eventually developed at start-up, Students Review, without MIT’s help. His second idea, a smoke meter that would warn of forest fires, has yet to find an investor. But Yankama is positive about its chances. He came on the trip to Russia to establish new connections and gain new experience. “I am very interested in being in your country," Yankama said. “I have no doubt that I’ll find many interesting opportunities here. Perhaps I will gain new knowledge and even have some practice in a Russian firm.”

So far, all such initiatives have been handled on a case-by-case basis as SkTech works to establish a system for accepting ideas into the program. “Previously, the government just put up buildings and herded people into them, hoping that ideas would generate themselves, ” said Artyomov. “The priorities have now changed: The main task is to generate and introduce ideas. The buildings and instructions will come later.”

MIT project manager Lyuba Semirog agrees. “This is only the beginning of the story, ” Semirog said. “So it is hard to give any concrete figures, concrete programs to be implemented, names of companies with which we will cooperate. Things change by the day. Every day brings new opportunities for interaction. One thing is certain: Skolkovo is an extremely interesting experience for all of us. Everything here is being created from scratch, a miracle is happening before our eyes.”

“This does not mean that Russia does not have a scientific sector,” Semirog continued. ”It exists and it is huge, which is why we are interested. But it is the legacy of the Soviet Union, both the good and the bad, and until recently it was ill-adjusted to the realities of the modern market. Skolkovo should change all that.”

Nikita Popov, a strategic analyst at RBK, is sure Skolkovo will be an important factor in changing the face of Russian science. ”Our country did not have projects like SkTech, nor has it seen such concerted, centralized efforts to establish links with the scientific community all over the world. Of course, there have been some attempts in recent history, but they mainly came down to paying out money to buy technologies. ”

Popov believes there is no future in that kind of exchange since if new technologies are to be properly introduced, a constant exchange of experience and new knowledge is needed.