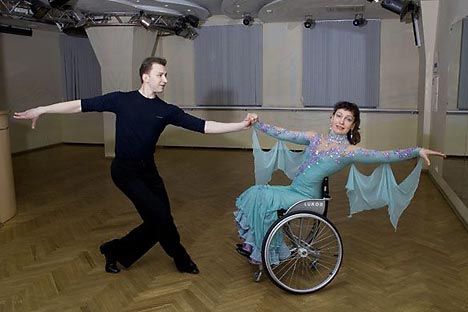 The Spiritualization Rehabilitation Center in Moscow helps people with disabilities to adjust to the normal life with so-called "dance therapy". Source:Press Photo

Anyone can dance, even people with disabilities, as the staff of the Spiritualization Rehabilitation Center [Centre Odukhotvorenie, in Russian] have proven. Moreover, this “dance therapy” has a positive therapeutic effect.

Imagine a terrible diagnosis – like a sentence that cannot be appealed – turning out to be just an option on a life’s journey. We could on the one hand, call it a miracle. But a person who engages in this work every day knows what lies behind each of these miracles. For over 10 years, the Spiritualization Center has worked with those on whom doctors and teachers have given up, those pronounced incurable, uneducable. The disabled here are taught to dance tango and cha-cha-cha, which in itself is amazing. But it’s not about dancing––or rather, it’s not only about it.

Looking at Tanya Baikova – a slender, graceful girl easily repeating the most complex dance routines – it’s impossible to imagine that there was time when she hadn’t left the house for seven years. At the age of 18, she was diagnosed with diabetes. Doctors prohibited any physical activity––her legs could fail. She had only enough strength to get from home to the clinic.

But one day, friends persuaded her to come to a ballroom dancing class for people with disabilities. “At first I could repeat motions for 10 minutes, then take a half-hour rest. After three days of classes, I almost couldn’t get out of bed,” Tanya said. Gradually, however, her rest breaks became shorter. And one day she realized that she could walk in the park for  half an hour without getting tired. For a girl who had spent seven years of her life practically imprisoned at home, this was not just a victory––it was a new life.

Today she is one of the leaders of the ballroom dance studio at the Spiritualization Center; she conducts classes and appears in concerts. The disease, of course, has not completely gone away, but it has become milder. The doctors just shrug their shoulders: they think it’s simply a miracle. But for Tanya, the miracle is that she can go visit a friend at their vacation home and generally lead a normal life.

The idea of engaging the disabled in ballroom dancing came to Leonid Tarasov, founder of the Spiritualization Center, by chance. His school friend had received first-degree disability status due to a blood disease and spent many months in the hospital. Leonid tried to visit him as frequently as possible. “Seeing him was hard––not even because of the illness, but because of the estrangement between him and everything in the world around him,” Leonid recalled.

“Today, every 10th person in the world has disabilities of varying degrees of severity. But does that mean that they can all be written off as a waste? We spoke a lot with each other about this subject, that society should change its attitude towards such people. And one day he said to me, ‘no more talking––I need to do something myself.’ And since I had once been professionally involved in ballroom dancing, the idea arose to teach the disabled to dance,” Leonid said.

Today, when it comes to the disabled, most people immediately imagine those confined to wheelchairs. And the authorities are honestly speaking more about them, reporting on the success of implementing the Accessible Environment program: how many access ramps are ready, how many new buses have special lifts for wheelchairs. But wheelchair users are only a part of the population with disabilities. In addition to disabilities as a result of diabetes, there are also people with heart disease, musculoskeletal system disorders, and mental development issues––like Down syndrome. Unlike wheelchair users, they can get around, but most often they are stuck indoors anyway. They simply have nowhere to go. Not only is there no accessible environment, but generally speaking no place where they would be accepted.

“At school age, they are still busy with something––parents try to give them at least some education. But then the inevitable question arises: what next? And there’s no answer to that. And yet, according to the most conservative estimates, Russia has approximately five million people between the ages of 14 and 35 with some degree of disability. More often than not, they remain alone with their problems. Without work, without the interest of friends, that leaves only one thing: spiritual death,” Leonid said.

It suddenly became clear that teaching people with disabilities ballroom dancing has a powerful rehabilitative effect. It all seems simple: They learn to rhythmically move to the music, listen to the count, and interact in pairs and in an ensemble. As a result, things happen that otherwise wouldn’t, that from the standpoint of professional medicine couldn’t be called anything but miracles: Take a child labeled with “profound mental retardation” and a “learning disability,” whose parents not only fear sending him off to school, but even leaving him at home for a minute––he’s suddenly taking rides on public transportation without assistance, going to the store, or warming up food.

The dances turn out to be simply a trigger, awakening in the human soul the motivation to go on living, move forward, no matter what. “They come to us suffering from these complexes and are very sad. But then they learn to move beautifully, cease to be ashamed of themselves, and make friends. For them, each lesson is one more step up,” said Tanya Baikova. Their group won prizes in four categories at a recent festival for children with disabilities.

But dancing is not the only activity of the center. For several years running, during the winter and summer holidays, the Spiritualization Center has taken a group of families with disabled children to a recreation and retreat center outside Moscow for a week. The involvement of parents is critical here. That’s why along with classes for children, the center holds special training sessions for parents. “Our task is to create a parental community,” said Inna Tarasova, deputy director of the Spiritualization Center. “Often in a family where the child has disability status, they take a purely consumerist position: everybody owes us. And we try to explain that if they themselves don’t make any effort, it will only get worse. Yes, the state can provide on some material help, but it will never replace friends and likeminded people.” A simple example: if a disabled child’s mother is sick, it’s a disaster for the family. But if there are several other moms who can bring food, cook meals, and clean the apartment, that means no one is abandoned.

The center already has such a community of parents: They hold weekly sessions of a family club where, for example, children with disabilities are taught the most basic and essential life skills such as making themselves a sandwich, going to the store for groceries.

Of course, such centers could not exist without the help of the state: here, all classes are free and most of its workers are volunteers. For several years in a row, the center has won charity grants from the Ministry of Health to assist children in difficult life situations. With this money, they were able to pay for ballroom dancing costumes; the retreat trip was also paid for with these funds. But the main problem today is that the center cannot accommodate everyone who is interested: people come to the classes from all over Moscow, and some even from the Moscow Region.

Space is a problem for all similar charities. Charities cannot afford to compete with commercial enterprises for preferential rent, and municipal facilities are usually occupied. The Spiritualization Center was lucky––they are allowed onsite at a scientific-methodological center of educational work in Novogireevo, as the director turned out to be a kindred spirit. But they can no longer take more than 50 people.

Businesses could help, but they often decline. As Inna Tarasova said, the explanation is that they need a brilliant project that will attract media attention. And so the Spiritualization Center is working on such a project: they want to organize a ball for the young people, where ordinary students would attend alongside students with disabilities.