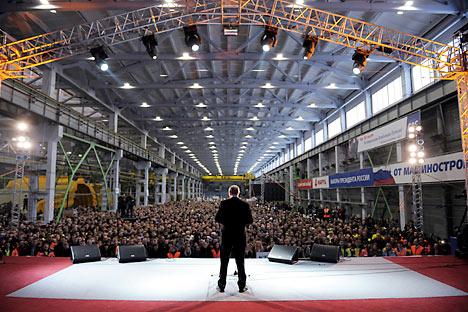 Russia's Prime Minister Vladimir Putin addressing the audience during a meeting of All Russia People's Front, an umbrella movement of his supporters, in the city of Kemerovo. Source: Reuters/Vostock-Photo

Russia beyond the Headlines publishes the abridged version of Russian Prime Minister Vladimir Putin's recent article, which appeared in the business daily Vedomosti.

We are living in a period of radical change in the global economy. Technology is being modernized faster than ever before. But human opportunities have never been greater either. And it is those who make the fullest use of these opportunities that will be the winners. In these circumstances we must ensure sustainable progressive development of our economy and try to shield our citizens from the hardships of crises as much as possible, while at the same time consistently and rapidly modernizing all economic sectors, from the material and technical base to approaches to our economic policy.

Global sales of gas, oil, metals, timber and other raw materials and low value-added products account for over 25 percent of Russia’s GDP.

Today Russia is dependent on the global economy and has been integrated into it very strongly, stronger than the economies of most other countries.

It has become commonplace to speak about a resource-based Russian economy.

Having an economy that cannot guarantee us stability, sovereignty and prosperity is unacceptable for Russia. We need a new economy with a competitive industry and infrastructure, a developed services sector and effective agriculture: an economy based on modern technology. We must develop an effective mechanism for modernizing our economy and attract the huge material and personnel resources needed to achieve this goal.

However, we should not rely on protectionist measures to diversify our economy, and not because we have joined the World Trade Organization. On the contrary, we joined the WTO because our economy is highly dependent on the external market in terms of both production and consumption. Ultimately, it is people and companies that pay high import duties. Excessive protectionism invariably leads to stagnation, low quality and high prices.

We need to find solutions to overcome our enfolding unilateral technological dependence.

Russia must play a bigger part in the international division of labor, not only as a supplier of commodities and energy, but as an owner of regularly upgraded cutting-edge technology in at least some sectors. These technologies will gradually come to make up a greater share of global GDP, while the share of commodities and conventional services will shrink.

We have compiled a plan for the reorganization of each company and their subsequent entry into the market. Some of them will become public liability companies and their shares will be subsequently sold off. These include Russian Technologies, the non-military assets of Rosatom and some other state corporations. I think it will be possible to reduce the level of state involvement in some commodity companies by 2016 and to complete the withdrawal from the capital of major non-commodity companies which are not connected to the natural monopolies or the defense sector.

Ensuring competition is the main pre-requisite for creating the demand for innovation in the economy. It is competition that prompts private businesses to seek better technical solutions and to regularly introduce new product.

The other side of the coin is to offer innovation. Russia can do more than simply buy innovation – we can also generate it. Our place in the future depends on how well we will use our potential.

The high levels of education among our people, our impressive legacy of fundamental science, our engineering schools, and the infrastructure for pilot-scale production which is preserved in many industries, are all factors that we have a duty to use.

In recent years, we have invested heavily in institutions capable of commercializing applied research. One example is Rusnano, another is the Russian venture fund, and then there are government-run tenders for innovative facilities at various universities. In addition, many Western companies have been attracted to participate in the Skolkovo project.

However, learning how to sell things is not enough. Sustainable innovative growth also requires a steady inflow of new ideas. Restoring the innovative nature of the economy should begin with universities – which should be seen as both centers for fundamental science and resources for innovative people. We need to pursue a national objective that results in globally competitive Russian universities. This means that we must ensure the steady funding of university-based research teams who have a view to international development.

We must overcome the inertia of our large domestic capital that, to be honest, has nothing to do with innovative projects, research and development. Currently, 47 state-run companies are involved in innovative programs. But private corporations must make it common practice to spend 3-5 percent of their gross income on research and development. There must be proper tax mechanisms in place and, most importantly, private business executives must realize that without this initiative, they won’t be seen as equal players in the global market.

Private investment is the main source for creating new production facilities and jobs. The situation here can hardly be called optimistic. Russia is losing out to rival countries in terms of its investment climate. Substantial amounts of capital are being withdrawn from Russia.

What needs to be done in order to solve the problem of capital?

First of all, we must expand the volume of the domestic market, thereby making it more attractive for direct investment. We are currently doing our best in this area. We have made the shift from declarations and statements of intent to real integration for the first time since the break-up of the Soviet Union. The past few years has seen the establishment of the Customs Union, the Common Economic Space and the CIS Free Trade Zone.

Second, the national business environment and the country’s long-term investment climate still leave a lot to be desired. In the past few years, we have launched numerous reforms on the initiative of President Dmitry Medvedev. But there have not yet been any noticeable shifts. We are losing in the competition of jurisdictions. Businesses operating in Russia often prefer to register property and transactions abroad. The main problem is rooted in a lack of transparency in the work of state representatives from customs and tax services and their accountability to society. This is also true of the judicial and law enforcement systems. Calling things by their names, this amounts to systemic corruption. We must alter our state, as well as our executive and judicial branches.

Third, ordinary people’s money is almost useless in the capital market. This means that the population does not receive its share of earnings resulting from economic growth and increased capitalization of the economy. We need programs for incorporating people’s money into investments via pension funds, trust funds and mutual funds.

This is a protracted process: We must not be anxious that it will not produce an immediate effect. The main condition of its future success lies in the fact that Russia is witnessing a rapid growth of its middle class, which is ready to invest in better healthcare, better housing, higher pensions, etc. The government must see to it that this money does not disappear.

{***Reducing government involvement in the economy***}

The global crisis has created supporters of state management, with additional arguments in favour of their position. But we know that Russia differs from many other countries in that the government continues to control a relatively large share of the economy and is more heavily involved in regulation, while its regulation methods, on the contrary, are inferior to the best equivalents. Our economic policy should be adjusted so as to reduce the scale of state regulation, to replace regimentation by market mechanisms, and to substitute liability insurance for administrative oversight.

It is also necessary to reduce the involvement of predominantly public-owned major companies and banks, as well as natural monopolies, including Gazprom, in other companies’ assets. Non-core assets, including media holdings, should be separated.

The purchases of new assets by government-run companies in Russia must be restricted. The major players should not interfere with the normal development of private businesses in their particular sectors, nor should they box private entrepreneurs out from more lucrative projects.

Sound capitalism that works for everyone will not emerge in Russia unless macroeconomic stability is maintained and reinforced.

Economic actors must be confident about Russia’s macroeconomic stability for years to come if they are to make long-term investments. In particular, the business community must understand how the government plans to resolve key fiscal problems and how it will finance approved budget expenditures, including those required for the modernization of the economy.

Our key objective is to restore long-term conformity between government spending and revenue. The two have been out of balance since the economic downturn, when significant resources were allocated to mitigate external shocks. That happened in most of the countries that were hit hard by the crisis.

The experience of the EU and the United States demonstrates the economic, social and political dangers of failing to maintain a balanced budget. In Russia, this problem is exacerbated by the strong dependence of government revenue on oil and gas prices.

In addition, we need to be very careful about taking government loans, always keeping in mind the lessons learned from recent global and Russian economic history. Large debt always means a partial loss of national sovereignty. It creates a situation wherein any deterioration of the economic environment makes the country dependent on investors, international organizations, and lender nations, which then dictate what measures a government must take.

In this regard, Russia, with the lowest sovereign debt among G20 countries, is currently in a more favorable position than other nations. We should maintain this advantage as a guarantee of our macroeconomic stability.

The article is abridged and first published in Vedomosti.ru. The full version of the article in English is available on the Prime Minister's web-site.