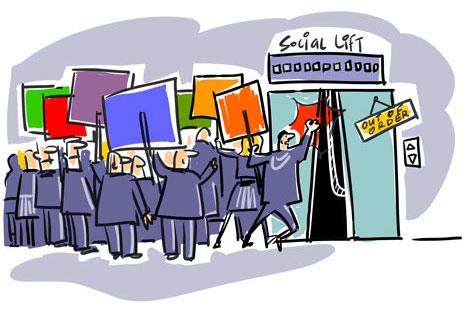 The government continues to propose ideas to win over the protestors, but so far they are only superficial.

Vladimir Putin has finally, albeit reluctantly, been drawn into a dialogue with the opposition protestors who have come into the street seeking reform. Yet he has done so in his own peculiar manner: he ingeniously deduced what was really wanted and came out publicly [via three recent articles] with ideas to match. For example, the prime minister concluded that the protesters wanted interesting and better-paying jobs. So, Putin first promised some 25 million new jobs.

But it seems to me that it is not exactly good jobs the protestors are after. Nor is it really justice, fair elections and an actual political choice. In reality, they want more opportunities that allow them to climb up the socio-economic ladder and to influence the situation in the country. This is precisely why some analysts are positive that if President Dmitry Medvedev had run for a second term, there would have been no protests. But had Russia’s creative class really been in tune with the system, they would have understood that Putin remained the one in control and Medvedev’s much-emphasized differences from his mentor were only illusions constructed by the government.

Yet the fact that the creative class wanted to believe this delusion is easy to explain. Medvedev meant at least a faint illusion of imminent change and, more important, change that would open the path upwards. Very few can put up with diligent drudgery coupled with slow career advancement, especially bearing in mind that people have been misleadingly assured that they have received a good education and that this would inevitably result in a great job. Incidentally, the government is still upholding this myth. Putin prides himself on Russia being one of the top four nations globally in terms of the proportion of people with a higher education – even though the current quality of Russian higher education has been questioned an infinite number of times. And his idea of creating a list of the 100 books that every Russian high school student should read does not warrant a comment.

Either way, the protesters do not need jobs. They already have jobs. What they really want is a vantage point and access to the upper levels of society. They are actually scared that the doors have closed for another 12 years. It is now being hinted that, if they keep quiet, it will be a mere 6 years, but they no longer have enough confidence.

The government actually discerned the need for social mobility and political influence before the elections, but its response was fairly cynical. It increased the overall number of civil servants, replaced some 60 governors and seriously reshuffled the State Duma in an attempt to show the public some new faces and give them hope that they, too, have a chance at taking part in the system. But the people saw through this stunt and as a result, many of the newly appointed governors and newly elected Duma deputies have already become objects of ridicule and mockery while simultaneously failing to instill a faith in an upward trajectory.

The government is now facing a difficult and unpleasant choice. It is too dangerous to keep the public shut out from power any longer, but it dreads letting them in: not everyone has finished the reading list.

Konstantin Simonov is the general director of the National Energy Security Fund.