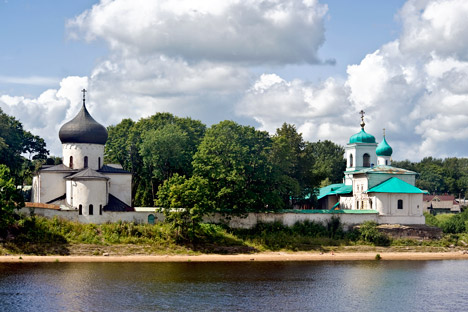 A cathedral in the northwestern city of Pskov has preserved a remarkable set of frescoes through centuries of war and occupation.

Source: All photos by William Brumfield

Among the many glories of medieval Russian religious art, none impresses more than the 12th-century frescoes at the main church of the Mirozhsky Monastery in the city of Pskov. It is difficult to say which is the greater miracle: their original creation or the fact of their survival for almost nine centuries through wars, revolutions and foreign occupation.

Pskov existed in the shadow of its northeastern neighbor, Novgorod, and the history of the city and its monastery was in a way dependent on the more powerful city. In 1136, the citizens of Novgorod stripped their prince, Vsevolod, of his authority and banished him from town. He retreated to Pskov, which welcomed him. Shortly thereafter Nifont, the bishop of the diocese of Novgorod, quarreled with the new Novgorod prince and joined Vsevolod in Pskov. Together Nifont and Vsevolod supported church construction, including a monastery in Pskov dedicated to the Transfiguration of the Savior and named after the small Mirozha River. The Mirozhsky Monastery was established on the left bank of the Velikaia River opposite Pskov’s imposing citadel.

Vsevolod died in 1137 or 1138, yet there is evidence that he provided support to Nifont in building the monastery's main church, the Cathedral of the Transfiguration. Although Nifont returned to Novgorod in around 1144, work continued at the monastery. The cathedral and its frescoes were completed by the time of Nifont's death in 1156.

Nifont was a strong supporter of the authority of Byzantium in religious matters, and the original design of the Mirozhsky Transfiguration Cathedral had the form of a raised Greek cross capped by a single dome. This design, with elevated central arms of the cross, proved impractical in a cold northern climate, and the corner walls of the west facade were soon raised to the height of the main structure. Something of the original design is still visible in the east, facing the river. The east side also has a large cylindrical apse, which contains the main altar. The walls themselves are of thin brick and rough stone, with a strong mortar of lime and crushed brick.

In the interior, the cathedral was completely painted with frescoes, which fortunately have survived to a degree that is unique among monuments of early Russian culture.  The quality of the frescoes demonstrates the vital tradition of Byzantine wall painting at a time when Greek master painters were still active in medieval Rus. At the same time, the choice and interpretation of the pictorial themes suggests the participation of local masters. Indeed, monasteries such as this one were in the forefront of missionary activity, propagating Orthodoxy over a territory that was often only nominally Christian. Therefore, frescoes were seen as an important affirmation of the faith. The paintings were presented in a way that would not only inspire, but also instruct.

Fortress city in the Russian Northwest

Images of Christ are especially important, as would be expected in a church dedicated to the proclamation of Christ as the Son of God. The main dome depicts the ascension of Christ surrounded by a host of angels. The upper shell of the apse has an image of Christ enthroned, with Mary and John the Baptist flanking the arch in front of the apse. And lower on the apse wall, Christ is shown in the Eucharist giving the sacraments to the 12 apostles. In this church-museum, no icon screen obscures the frescoes in the apse.

The ceiling vaults and the upper surfaces of the main walls contain scenes from the life and passion of Christ, including the Garden of Gethsemane, the crucifixion and the lamentation over the body of Christ. Also prominent are scenes involving Mary, such as the annunciation. Other subjects include John the Baptist and many Byzantine saints. The lower wall segments include scenes from the Old Testament, such as the expulsion from the Garden of Eden and Jacob wrestling with the angel.

The style of painting shows extraordinary vigor, not only in the range of color, but also in composition and emotional depth. The depictions of faces and bodies have the strong linear emphasis and rhythm characteristic of the best wall paintings of the Middle Byzantine period. It is important to note that these frescoes were painted a few decades before the sack of Constantinople in 1204 by Western and Venetian Crusaders during the Fourth Crusade.

Not all of the frescoes in Transfiguration Cathedral have survived, and some on the lower walls show significant damage. Because of its location, the monastery has been subjected to floods, most recently in April 2011. Some other structures at Mirozhsky Monastery – notably the 17th-century Church of Saint Apostle Stephen – have been made available for use by the Russian Orthodox Church.

Because of its exceptional cultural value and fragility, the Transfiguration Cathedral remains under national protection supervised by the excellent Pskov State Architectural and Art Museum. The recent prolonged restoration of the cathedral frescoes is a major step in what hopefully will be the preservation of this superb art for centuries to come.