Campaigning on the street, online and in polling centers 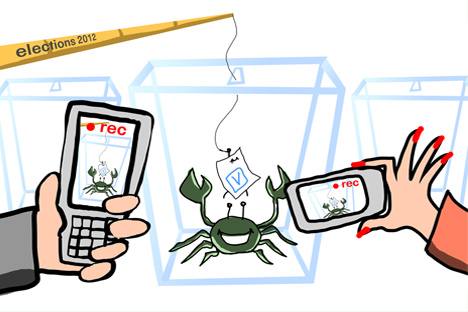 The newfound political activism among Russians is manifesting itself during this year’s presidential election campaign in three new ways – on the streets, on the Internet, and in the polling place.

Political rallies in central Moscow are not unheard of. The pro-Kremlin movement Nashi is known for staging mass rallies; the Communists have traditionally held marches on Feb. 23 and Nov. 7, and the opposition holds symbolic protests on the 31st of every month with 31 days. But in December 2011, the meaning of street protests for Russian political movements changed completely.

After ordinary Russians from across the political spectrum rallied against alleged vote fraud in the State Duma elections, the ability to get supporters into the street became and important indicator of the popularity of a politician or political platform. On Dec. 10, the movement For Fair Elections hosted a rally on Bolotnaya Square attended by nearly 30,000 people. Two days later, the government made its first attempt at holding a rally, bringing several thousand people to Manezh Square. Although the official count of participants was 25,000, attendees estimated that no more than 6,000 people were present. On Feb. 4, the pro-government forces were better prepared, countering an opposition march of 120,000 on Bolotnaya Square with a massive rally of around 130,000 people at Poklonnaya Hill. Later this month, dueling rallies will again take place. Pro-government forces, the Communist Party of Russia (KPRF) and the Liberal-Democratic Party of Russia have all scheduled meetings for Feb. 23, while the For Fair Elections movement will hold another protest on Feb. 26.

The struggle for the Internet

Although the visible nature of mass protests make them an attractive tool for politicians of all stripes, political movements are also making themselves felt on the web.

In February 2011, blogger and activist Alexei Navalny launched an Internet campaign to promote his “party of crooks and thieves” brand. The pro-Putin forces responded slowly – In May 2011, United Russia announced plans to create a special division to work on the Internet. Then, in August, Vasily Yakimenko, founder of the Nashi movement, disseminated a policy document, in which he called on all his supporters to “learn to manage people through social networks” and “independently form the federal information agenda and promote their own newsworthy events." On the eve of the Dec. 4 State Duma elections and on election day, many media websites and online projects became targets of Distribution Denial of Service (DDoS) attacks. The opposition opted for an asymmetrical response and spread online numerous reports about election fraud, confirmed by photos and videos. These messages became the main catalyst for the mass protests.

The participants in the protests say that most of all, they want transparency, and so now the various factions are competing on a third stage – the recruitment of election observers. In early February, meeting with young lawyers who said they were eager to observe the voting process, Putin heartily approved of their wish “for the entire country to understand that the election will be fair and its results will be objective.”

Putin’s headquarters seems ready to delegate representatives of the League of Voters and the Yabloko party as its own election observers while the opposition, led by Navalny’s new site RosVybory is also recruiting observers. Should election commissions try and distort the results in favor of the “main candidate” contrary to Putin’s promises, representatives of the opposition will not keep silent, but the status of Putin’s own observers will lend their conclusions special weight. If these people confirm that the election results have been fair at least at some of the polling stations, the authorities will have a weighty argument in the dispute over the legitimacy of the election as a whole.

Dmitry Kamyshev is a political columnist for the Kommersant Vlast analytical magazine.

This article was originally published in Russian in Kommersant.ru