An attempt on the life of Abkhazia 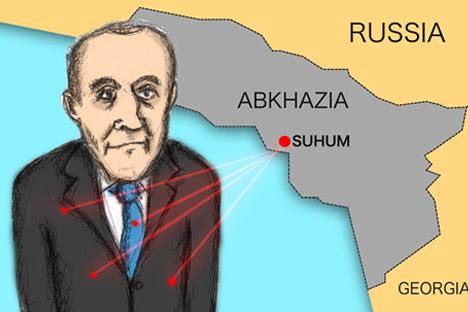 Abkhazia wants to be seen as a viable country, but until it confronts its serious crime problem, more international recognition is unlikely.

On Feb. 22 2012, Abkhazian President Alexander Ankvab survived an assassination attempt. It was the sixth such attempt on his life. He endured four assassination attempts during his tenure as head of the Abkhazian government (February and April 2005, June and July 2007) and once during his time as vice president (on Sept. 22, 2010). Nevertheless, the current attack stands out, not least for the fact that this time it was an attempted attack on the president of a partially recognized country. Even though Ankvab suffered no injuries, Abkhazian journalists, experts, and public figures are in general agreement that the latest attack was the most ambitious and best organized yet. Stanislav Lakoba, secretary of Abkhazia’s Security Council, described the attack like this: “There was an attempt to intercept the guard. Then the escort was met with grenade launcher machine gun fire.” It’s obvious that a lone assailant would not have been able to carry it out in the spur of the moment, but Ankvab also bears some responsibility for being lax with his personal safety. Despite all the attempts on his life, Ankvab never sought to isolate himself from his fellow citizens behind high fences with security. In all the posts he has occupied since becoming prime minister in 2005, Ankvab lived not in the capital of Sukhumi, but in Gudauta, his home region.

Who is behind the attempt to kill the Abkhazian president?

Practically on the heels of the attempt, Ankvab held an emergency meeting of the Security Council, at which he stated that the goal of the assassination attempt’s organizers was to destabilize the socio-political situation in the republic. Such a tough assessment from the Abkhazian leader is easy to understand – not only for purely personal reasons, but also for political ones. In fact, on the eve of the parliamentary elections, such a scenario would be highly undesirable for Abkhazia, which is seeking to show the entire world that it is a viable state.

For the first months and years after it proclaimed independence, Abkhazia was focused on securing its borders with Georgia. Now that this task is mostly complete, the republic is focusing on constructing government institutions, but this process has proved no less challenging than the question of security.

First there was the test of Russian money. After 2008, money poured into the republic, partially to develop the area ahead of the 2014 Olympic Games in neighboring Sochi. The role of Abkhazia’s infrastructure in this project cannot be overstated – ever since the Soviet era, Abkhazia and the greater Sochi area have been considered a single tourist complex. But the money was not distributed in an open and transparent environment and now the problem of corruption has become a serious problem for the republic. In the snap presidential election last year, Alexander Ankvab was able to win largely due to the fact that he promised if not to end corruption, then to at least seriously diminish it. And he has taken some actions in this regard. During interviews in 2009 and 2010, Ankvab made it clear that the viability of the Abkhaz state depends on whether or not it can defeat organized crime, pointing out that with high levels of crime, the republic will not receive private investments or tourists who have traditionally boosted the Abkhaz economy. One such tourist, Victor Yerofeyev, a writer well known in Russia and the West, published an article in the International Herald Tribune last July in which he stated, among other things, that Abkhazia is “a country with a human face, not a bandit’s squint. Abkhazia’s problem is that it cannot get the international community to listen to the reasons why it declared independence, or to appreciate the democratic principles of its ‘illegal’ governance.”

But now the attack on Ankvab calls into question the sincere words of the famous writer. It would be nice to believe that a competent investigation will identify the organizers and perpetrators of the assassination attempt, but there are serious doubts about that. After all, none of those responsible for the five previous attempts have ever been found. But the situation of crime in the republic must be dramatically addressed. And Abkhazian society cannot fail to understand that. In this context, it’s no surprise that spontaneous demonstrations with anti-corruption slogans were held in the Gudauta District and in Sukhumi in support of Ankvab.

On March 10, the citizens of the partially recognized republic will elect a parliament. It will once again face the difficult test of viability. And the worsening crime situation only complicates the delivery of that test. In any case, these kinds of incidents weaken the position of the republic as a whole and its leadership in particular. It demonstrates that Abkhazia is not yet fully ready for an autonomous existence. Therefore, whatever the goals and the programs of the candidates for parliament are, all of those elected must support a policy of rigid decriminalization of society and awareness-building among the republic’s residents.  Without solving this problem, all the talk of independence and viability will not be taken seriously – either in Moscow or in Europe.

Sergei Markedonov, is a Visiting Fellow at the Center for Strategic and International Studies in Washington D.C