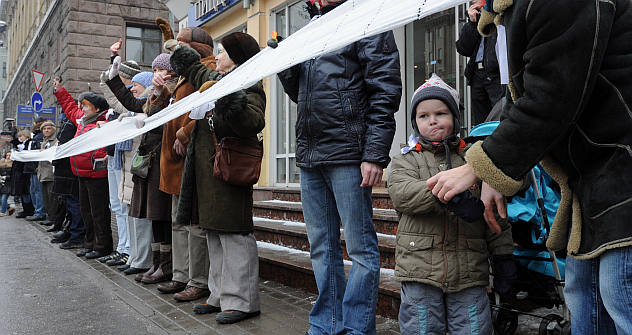 The participants of the Big White Ring flashmob took to the streets once again to support fair elections. Source: ITAR-TASS

The Feb. 26 rally in support for fair elections has the opposition still hoping to establish the dialogue with the authorities a week ahead of the presidential vote.

Another rally, the Big White Ring, organized by the Russian opposition on Feb. 26 turned into a large-scale flashmob attended by thousands of people who once again took to the streets to support fair elections before the 2012 presidential election.

In an interview with Ria Novosti, leftist leader Sergei Udaltsov said that participants succeeded in creating a human chain around the 15.4-kilometer (9.5 mile) Garden Ring in central Moscow.

According to police, about 11,000 opposition activists participated in the event, but the organizers and rally attendees claim that the demonstration attracted up to 40,000 people.

“Although we didn’t expect the rally to be so large-scale in comparison with the previous ones, we were glad to see thousands of participants,” said Darya Peshchikova, 19, a student from Moscow State Institute of International Relations (MGIMO) who attended the rally. “We saw a lot of people around the Garden Ring. And they did well in creating the human chain, which didn’t have any holes. It’s pretty difficult to give the exact number of people, but, definitely, if we take into account those people driving in cars and buses, we could assume that the rally brought together almost the same number of people like the ones on Bolotnaya Square.”

According to the organizers of Sunday’s grassroots protest, this kind of a demonstration was chosen because it didn’t require permission from the Moscow City Hall. Theoretically, about 34,000 people would be needed to “lock” a human chain along the Garden Ring according to figures given on the the rally’s website, 26feb.ru.

In addition to the human chain, a car rally took place on the Garden Ring at the same time, with drivers circling the chain and cheering its participants. It was the third rally of this kind and, according to police, it brought together fewer participants than the previous ones. According to organizers, up to 60,000 people participated in each car rally, whereas police put the numbers at 30,000 per rally.

Opposition supporters weren’t the only ones taking to the streets on Saturday. Supporters of Prime Minister Vladimir Putin marched with posters reading: “Putin loves everyone” and chanting “Putin and Victory!” According to Kommersant FM radio, some of them attempted to break the human chain.

But in reality, the rallies were quite peaceful, said Peshchikova, “When we traveled in a bus around the Garden Ring, we witnessed the rally organized in support for Putin near the Park Kultury (Park of Culture) metro station,” she added. “There were some odious people but, generally, most of participants tried to keep out of them. It was really nice not to see any political activists with slogans [calling to support their parties and movements].  This time, the rally was attended primarily by those who just wanted to express their discontent once again and support honest elections. Besides, I was pleased to see how friendly police officers were during the rally. Fortunately, no serious incidents happened.”

Yuri Korgunyuk, a political expert from the Indem think tank, believes that Russia’s opposition movement took another step in defending their political and civil rights and establishing dialogue with the authorities. “There are likely to be more new demonstrations after the presidential campaign, and the opposition may find other reasons for new rallies,” he said. “Possibly, they will come up with new ways to show their indignation.”

It is not the discontent of the [unsatisfied] minority, Korgunyuk emphasized, but an attempt to express civil position that comes from the whole community that doesn’t want to be prevented from participating in Russia’s politics.