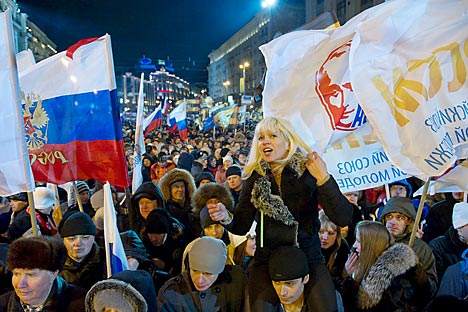 Vladimir Putin has won the presidential race. And while his supporters lauded the victory, the opposition is planning massive protests. Tens of thousands of people from both camps are expected to gather in central Moscow on Monday.

Moscow’s population has become visibly more politicized in the run-up to the elections.  Against that backdrop, police in the capital are preparing for a very busy day ensuring that several mass gatherings of people with opposing political views pass off peacefully. Officers warned organizers of the opposition demos against any departure from their publicly-declared plans.  If they try to turn a sanctioned rally into an unsanctioned march, law enforcers will intervene, police Chief Vladimir Kolokoltsev said. The senior officer lashed out at calls, published online, for demonstrators to arm themselves with sticks and batons.

Organizers of the opposition rally “For Fair Elections” believe that Sunday’s presidential poll was illegitimate, citing alleged violations. They expect between 10,000 and 30,000 people to take part in a demonstration on Pushkin Square. The city authorities say that if the number of protesters exceeds expectations, they will close a nearby street to traffic and extend the territory for the gathering.

The venue for the rally has changed several times after the authorities refused to allow the demonstration to be held at places the organizers initially requested, citing concerns over hampering traffic in Moscow's busy streets. At one point the organizers threatened to bring people onto the streets without seeking official permission, but eventually agreed to gather at Pushkin Square.

Several prominent opposition figures, including the leader of the Left Front movement, Sergey Udaltsov, and co-chairman of the unregistered People’s Freedom Party, Boris Nemtsov, have confirmed their participation.

Speaking days before Sunday's presidential vote, Udaltsov said the opposition was inviting people to sum up the election process, but noted that the eventual tone of the demonstration would depend on the results.

Defeated presidential candidate Mikhail Prokhorov, who won almost 7.98 percent of the vote on Sunday, has said he will try to attend the demonstration.

The prominent anti-corruption blogger Aleksey Navalny has not ruled out an appearance on Pushkin Square either. The event will be the latest in a series of mass protests that began last December after allegations of widespread irregularities in State Duma elections.

A smaller, unsanctioned rally organized by radical activist Eduard Limonov is expected near the Central Election Commission building in Moscow. Nationalist leader Dmitry Dyomushkin, who expects 5,000 of his supporters to come to the rally at Pushkin Square, says he will be calling for his people and other protesters to join Limonov’s rally.

Meanwhile, Putin supporters are planning their own demonstrations in Moscow on Monday. The largest, organized by the Russian youth movement Nashi, will take place on Manezhnaya Square simultaneously with the opposition “For Fair Elections” rally.

Nashi say their goal is to oppose those who try to discredit the legitimacy of the election. They say they expect some 15,000 supporters at the rally. Another major pro-Putin rally will take place at Lubyanskaya Square, a venue originally requested by the opposition. Organizers expect more than 1,000 people to show up on the square, which saw a similar rally on election day.

Pro-Putin events are being held for a second day. Moscow police say over 110,000 people came to Manezhnaya Square on Sunday to celebrate the prime minister’s victory in the presidential race. Preliminary results say he won almost 64 per cent of the vote. Vladimir Putin and Dmitry Medvedev both addressed the crowd by the Kremlin walls.