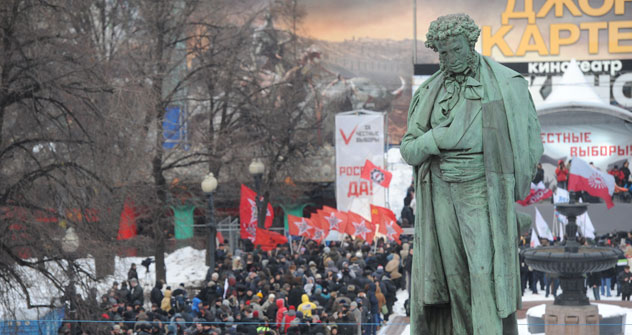 Thousands of opponents of president-elect Vladimir Putin rallied on Pushkinskaya Square in downtown Moscow on Monday evening, denouncing his victory at the presidential polls as illegitimate.

"I'm filled with hatred toward these elections, and I will never recognize them," Left Front leader Sergei Udaltsov said at the rally.

Prime Minister Putin, 59, is returning to the Kremlin for a third non-consecutive term in office. He trounced his rivals with 63.6 percent of the vote, according to final figures from Central Election Commission.

Election and police officials have acknowledged violations, but insisted they were too small to make a significant impact on the vote’s outcome. Putin has ordered investigations into all violation reports.

Police said that the turnout at the anti-Putin rally, titled “For Fair Elections” stood at 14,000. Organizers said at least 20,000 showed up.

The venue was full some time before anuy speakers took the floor, and the crowd broke into chants of “Russia Without Putin” from time to time.

“You have stolen from us!” whistleblowing activist Alexei Navalny shouted into a microphone, referring to the authorities.

Presidential candidate Mikhail Prokhorov, a tycoon who targeted the middle class and took 7.9 percent of the vote, also took the stage to renew his pledge to establish a political party. His appearance elicited a mixed reaction of boos and cheers.

City Hall was reluctant to sanction the grassroots protest rally, denying organizers all three preferred venues last week. Only after some 5,000 signed up on Facebook to participate in a rally in defiance of the ban did the Moscow authorities and the organizers work out a compromise.

Police invited Udaltsov and fellow opposition politician Ilya Yashin for a “prophylactic talk” ahead of the rally on Monday, but both refused to attend.

Dozens of trucks with riot police rolled into downtown Moscow on Monday, and a helicopter hovered in the sky over Pushkinskaya Square at the rally’s start. City police officials threatened to crack down on anyone violating rules for public rallies.

The election results. Source: The data from Central Election Commission and VTsIOM. Click to enlarge .

Four massive anti-Putin rallies have taken place in Moscow since the parliamentary elections Dec. 4, each gathering tens of thousands. All ended without incident, even earning praise from Putin for their peaceful nature.

Opposition leader Boris Nemtsov said the event on Pushkinskaya Square would be followed at 9 p.m. by a flashmob in which silent protesters encircle the Kremlin in a human chain.

Police said the event is illegal and would be dispersed, according to a report on the liberal Ekho Moskvy radio station. However, law enforcements did not intervene with a similar flashmob on Feb. 26 in which several thousand opponents of Putin lined up along the Garden Ring in central Moscow forming a human chain.

The post-election Protests were kicked off by a Communist Party rally. The Communist candidate, Gennady Zyuganov, was the runner-up on Sunday with 17.2 percent of the vote. Police said some 300 people showed up for the event, which took place on Pushkin Square before the larger grassroots event.

About 100 activists of the radical opposition group The Other Russia were detained during an unsanctioned protest near the office of the Central Elections Commission in downtown Moscow on Monday. Police said about 800 turned up and about 70 of them were held.

Novelist-turned-politician Eduard Limonov, who heads The Other Russia, was among those detained, the group’s spokesman said.

Meanwhile, about 10,000 rallied at the Manezh Square by the Kremlin walls to hail Putin’s victory at the presidential polls, police said.

Speakers at the pro-Putin event included sports and showbiz celebrities, who congratulated Putin on his victory while denouncing the opposition’s claims that campaigning was unfair and the vote was rigged.

“The forces of good have won, Vladimir Putin united everyone,” said B-list actor Sergei Gerasimov, to moderate cheers from the crowd.