A space for dialogue? 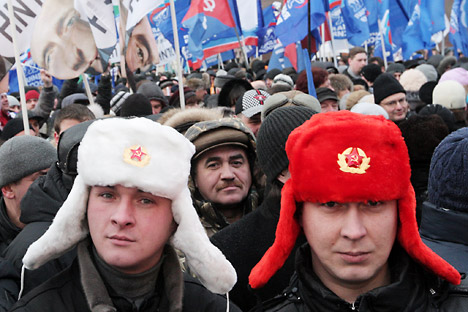 Society remains unhappy, but no one is really in the mood to fight. Where to Russia’s protestors go from here?

The authorities tried not to notice the first protests that erupted in December after the State Duma elections, but, when that became impossible, their response was conciliatory. “The best part of our society or, rather, its most productive part demands respect,” said Vladislav Surkov, then the first deputy head of the presidential administration and the Kremlin’s chief ideologist, describing the protestors.

The core of the early rallies consisted of people between the ages of 23 and 39, who earned more on average than the general population. By the time of the Feb. 4 rally on Sakharov Prospect, however, this upwardly mobile middle class had been joined by other social strata, according to a Levada Center poll. This rally included about equal numbers of pensioners and students; Sixty-six per cent of the protesters had university degrees. “It was society as a whole, sending its messengers to state that it is wants to live differently,” said the Levada Center’s Alexei Levinson.

After this protest, President Dmitry Medvedev proposed a number of political reforms for which, as he himself said recently, society was not yet prepared. These included a return to gubernatorial elections, increased representation of regional governments in the State Duma and a simplified procedure for registering parties.

The protesters were not satisfied with these proposals, because they were not responses to their actual demands. “Half-hearted measures. Besides, the authorities have discredited themselves by many years of promises that they have not kept,” said protestor Sergei Zhitnikov, a 26-year-old programmer and businessman. And so the protests continued.

By this time, the authorities realized that the protestors had no coherent demands, and no real leader with whom to negotiate an end to the actions and so they went on the offensive. Surkov was fired and replaced with Vyacheslav Volodin, a prominent United Russia functionary known to favor head-on solutions. Then the authorities organized counter-rallies in support of the government. Thousands of state company and public sector employees, workers and teachers were brought from the regions to take part in pro-Putin rallies in Moscow. Prosecutor General Yury Chaika speculated that the anti-government protests were financed from abroad. No one confirmed this thesis, but it was promptly taken up by pro-government demonstrators. Vladimir Putin himself drew a line in the sand, declaring at a rally on Feb. 23, Defender of the Fatherland Day, that “the battle for Russia continues” and he would not allow “anyone to impose their will on us.”

Protestors refuse to back down

Three days after Vladimir Putin’s speech, thousands of people formed a 9-mile-long human chain in Moscow to express their dissatisfaction. “The most remarkable thing about it was that the tone set during the first rally on Bolotnaya Square – an entirely new tone in Russian politics – was still there. Indeed, it had grown stronger. High motivation without aggression is an amazing spectacle,” one of the participants in the action wrote.

Many feared that the rallies might result in clashes between the poor workers from the regions and the Moscow “middle class.” Or that the authorities would use force to disperse the demonstrations. But the protesters did not act violently, preferring the non-violent tactics of Mahatma Gadhi and Martin Luther King, Jr. to burning cars and marching on the Kremlin. Whether or not this will prevail is anyone’s guess but, so far, all the protest actions have adhered scrupulously to the law, and have thus avoided any real confrontation with the authorities.

For their part, the Putin supporters are also not in the mood to fight. They are ordinary people who also want a better life. Both groups support fair elections, and both have something to lose. This makes dialogue possible. But the authorities should take the first step. Meanwhile, they have so far been acting, election campaign-style, to mobilize supporters.