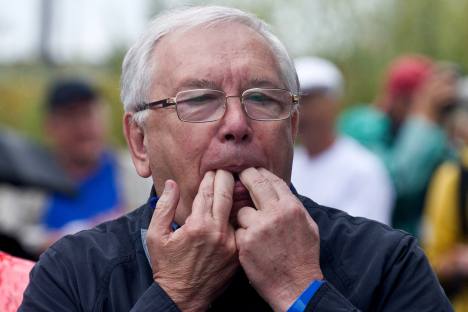 "I am not a supporter of gay rights; I am a champion of the law," said Russia’s Human Rights Commissioner Vladimir Lukin. Source: Kommersant

Russia’s Human Rights Commissioner Vladimir Lukin chose a symbolic moment, the day of the Russian presidential election, to publish his annual report on human rights in the Russian Federation.

Russia Beyond the Headlines: You have said: “If the human rights situation in Russia were fine, the human rights commissioner would have nothing to do.” Did you have a lot to do this year?”

Vladimir Lukin: [Laying a heavy folder on his desk] This report has 156 pages, plus a supplement of about the same size. They show to whom we wrote, the answers we received, various petitions, complaints about court rulings revoked, etc. Our reports are usually structured like this: We take provisions on human rights and freedoms from the Russian Constitution and analyze, point by point, the most significant developments during the past year. Everybody knows that laws may be wonderful, but their enforcement might leave a lot to be desired. It wasn’t for nothing that they said in Tsarist times: “The laws in Russia are horrible but they are partly compensated for by horrible enforcement.” Today, not all our laws are horrible, but enforcement, to put it mildly, is far from perfect. The relationship between the quality of the laws and the quality of enforcement is so far in favor of the former.

RBTH: What have been the most frequent complaints?

RBTH: Judging from the stormy end of the year, do you foresee an increase in the number of complaints about violations of political rights and freedoms?

V.L.: The figure has been stable throughout the year: about 1.8 percent of the total number of complaints, though that was up 0.6 percent over 2010.

RBTH: What about the opposition rallies on Bolotnaya Square, Sakharov Avenue and others? Did you take part in these actions as an observer?

V.L.: We agreed with the Moscow police that we would constantly monitor the rallies and demonstrations. So far, the results have been good. We met with Interior Ministry officials before every major event to discuss all the details.

I would like to say that the democratic character of the mass events that began in December gives me a sense of pride and even patriotism. I am an international affairs specialist and I can compare how such actions take place in other democratic countries on both sides of the Atlantic. In Russia, the people and the police behave in a more organized, civilized and correct fashion. I hope this will continue to be the case.

RBTH.: Perhaps they are bolder there because they have more freedom?

V.L.: The boldness of the crowd cuts both ways. Sometimes it leads to very serious abuses. The skill of the police and the organizers of the rally consists in combining the right to live and the freedom of expression. So far we have managed to do this.

Russia’s historical path is approximately as follows: discontent with the authorities leads to protestsm and the protests then become violent. Either suppression of large numbers of people, with casualties, or downfall of the regime and revolution with ghastly consequences then follow. We have to get out of this “red wheel,” to use Alexander Solzhenitsyn’s phrase.

I disagree with those who try to analyze the current situation only in terms of that historical pattern. Yes, it has to be taken into account. The past haunts us. But history is not the only factor in the country’s development. New people are coming along. We have seen these people. They do not behave the way the war-weary citizens behaved in 1917. They have a totally different mentality.

RBTH: Why do you think the authorities and the opposition found it so hard to agree on where the rallies should be held?

V.L.: We have a law on mass manifestations, rallies and demonstrations. Under the law, no permission is needed for holding such events, but the authorities must know about people’s intentions in order to ensure security. That is where the problems begin, with the parties jousting for position. You cannot erase politics from politics. But politics, as our leaders admit, must be modernized. Our -- and not only our -- authorities and opposition suffer from chronic afflictions. The authorities suffer from afflictions of age. They are forever fretting about the opposition, accusing it of being naïve, inexperienced and unpatriotic. The opposition suffers from infantile disorders. It sees every action as a crusade, with eyes burning with moral indignation. The best way to treat these afflictions is a substantive dialogue. It can be difficult and not always successful and it might involve political maneuvering and intrigues. But it is a dialogue all the same. This is the beginning of democracy, the start of modernization of our political system. The Human Rights Commissioner’s institution, for all its flaws, seeks to contribute to such dialogue.

RBTH: Going back to the report, bloggers write that you support manifestations of sexual minorities and defend gays.

V.L.: I am not a supporter of gay rights; I am a champion of the law. People with a sexual orientation different from mine, for example, are citizens like the rest of us because various alternative orientations are not a crime under Russian law. As an ombudsman, it is my duty to defend their rights. These people can express their views and may ask for a site where they can do so. But the question arises as to where rights end and aggressive advocacy begins? This is an object for study. And one more thing. I, for one, would be very much surprised if the advocates of the traditional sexual orientation staged a manifestation and demonstration in support of their sexual preferences, and I would not see that as a case of upholding their rights.