The Made Here project leads Russia away from a “commodity economy” 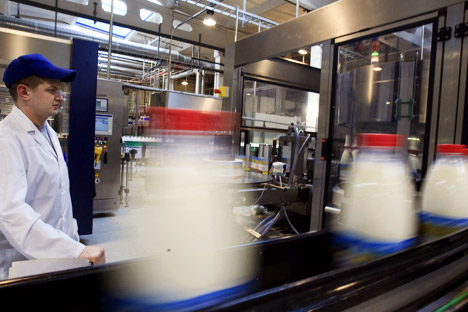 "Commodities account for only about a third of Russia’s budget, while two-thirds of revenue is not related to commodities," said founder of the Made Here project Roman Kovrigin. Pictured: Dairy farm Petmol, a subsidiary of the Unimilk Company in St.

A programmer challenges a widespread economic cliché on his crowd-sourcing site.

Conventional wisdom has it that Russia depends entirely on energy exports and is incapable of producing anything on its own. The cliché has something to do with the nature of the media, which hardly ever report in prime time TV newscasts the launch of new steel plants or write in a general-interest magazine about achievements in the pharmaceutical industry.

The Made Here site is designed to redress this imbalance, at least on the Internet. The site is a resource devoted to new production facilities in Russia, modernization, innovations, discoveries and successes achieved on world markets.

The project is the brainchild of an enthusiast, Roman Kovrigin, a web programmer with 10 years’ experience, originally from the southern city of Rostov-on-Don now living in Moscow. Kovrigin began writing about Russian industry in his blog on LiveJournal. After publishing a series of articles on cutting-edge industries in Russia, which instantly spread throughout the Runet, he realized that the project had outgrown his personal blog. In September 2010, he launched the Made Here project, relying on user-generated content – anyone who wishes to contribute an article or piece of news about Russian industry can do so.

The main goal of the project, as defined by Kovrigin, is to bring back a sense of pride of the country. “It would be hard for us to move forward without pride in our country and faith in its future based on its achievements. If the results of your efforts are not visible, you feel discouraged and lose motivation to work. We want to show that the results are there and that our efforts are not wasted,” Kovrigin said.

Initially, Kovrigin was the sole contributor to the site but, as the resource has become more popular, more and more information has come from the public. The site’s statistics show that there are now more than 500 active contributors, and the site gets 12,000 hits a day, twice as many as there were four months ago.

Information in the community is verified by the participants themselves and authenticated by photographs. There are no false or advertising materials on the site; it is financed by donations from the participants, which cover the operating costs. Kovrigin’s main complaint is the lack of time to maintain the Made Here site, as he still works full time as a programmer.

Russia Beyond the Headlines: What structural changes need to take place in the country in order to move it away from the “commodity track”?

Roman Kovrigin: The shift has already taken place. Yes, oil and gas are an important part of our economy, but what’s wrong with that? Considering our climate and the distances involved, oil extraction is a challenging task. In Saudi Arabia, oil gushes out of the ground under pressure. Here we need high technology to extract the crude. You think oil flows down the pipelines by itself? No, it takes sophisticated pumps to make it flow. Building gas and oil pipelines in itself is a tough engineering task in our conditions. And think of offshore production in the Arctic. Russia recently built the ice-resistant stationary platform Prirazlomnaya. No other country has yet built such sophisticated structures suited to the harsh Arctic climate.

Commodities account for only about a third of Russia’s budget, while two-thirds of revenue is not related to commodities. For several years now, the GDP has been growing faster than its commodity component, which has been virtually stable. In other words, rather than “getting stuck on oil,” we are moving in the opposite direction.

Russia is an industrial power. We produce things that few other countries are capable of producing, such as nuclear reactors, turbines, jet engines, aerospace and military technology. The shelves in U.S. shops are chock-full of Chinese products. Look where the main product brands are produced. They are produced in China. But that does not mean that the United States or Germany is a commodity-driven economy because, in addition to the consumer market, there is the market for industrial goods, which is the most important, strategic market. You cannot buy a nuclear reactor or a ship engine in a supermarket.

RBTH: When will Russia be able to produce competitive consumer goods for the world market and not cheap alternatives for domestic consumption?

R.K.: This will not happen until we meet the demand on our domestic market. At present, about half our imports are machines and equipment and at least half of these are investment imports, that is, what becomes the fixed assets of enterprises, production lines, robots and machine tools. We are talking about billions of dollars here. This shows that the domestic market is not saturated with high-tech products. Why should we sell abroad what we need ourselves? Last year, car production in Russia reached a record high, yet we are still importing millions of cars. Our shipyards have full order books for years ahead and the demand for new ships is colossal. We set a record for plane production last year but we still have a long way to go to renew the entire fleet of planes.

Russia has increased its technological exports 2.5-fold in the last 10 years. There is demand on the market for our industrial lasers, scanning microscopes, ship simulators, navigation equipment. We supply products for Boeing and Airbus. We render software development services and many big companies have design offices in Russia. We sell farm machinery. France has bought several dozen of our Soyuz booster rockets, and so on. And Russia is, of course, securely the second-biggest supplier of arms in the world.

RBTH: What things made in Russia do you use yourself?

R.K.: I do not buy goods proceeding from the “buy Russian” principle. For me, it’s the price/quality ratio that matters. Luckily, our goods have an edge on that.  They are better than the Chinese ones in the same price range and they are cheaper than European goods in the same quality category.