Finding success in business and politics 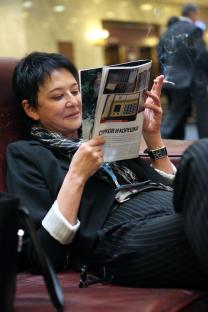 At various times a business leader and a politician, today Irina Khakamada teaches seminars on business psychology, teaching the art of communication.

Irina Khakamada is easily one of Russia’s most prominent women, having been a successful entrepreneur, deputy speaker of the State Duma and a government minister. Now Khakamada has largely retired from the public eye, but remains an influential figure; she has reinvented herself as a teacher, giving master classes in the art of business psychology and communication. The thread that runs through all her courses is the art of negotiating. “Eighty percent of business success depends on successful communication, and most Russian businessmen fail during most negotiations,” Khakamada said. “The reason is not their inefficiency but an inability to communicate.”

Khakamada holds degrees in economics and embraced entrepreneurship when Russia became a market economy. She took a position with the government in 1997 to promote entreprenuership. In her opinion, the main problem at the federal level is not that some laws are good and some are bad, but that they are changed too often. “Rules, including tax rules, are altered every year,” she said. “Rules must be adopted once a decade.”

Khakamada says that gender discrimination exists in both business and politics, and that while there is no gender difference in the ability of a person to succeed in business, she maintains: “Women are better negotiators; they are less ambitious and are more eager to accept a compromise; they are also better at scanning the psychological type of their opponent in order to adapt and get what they want.”

Khakamada believes that her business experience made it more difficult for her to succeed in politics. “They told me that politicians did not understand me,” she said, “since I behaved like a businessperson.”

She explained that, in business, when you strike a deal and shake hands, you start working even before the contract is signed. “The main thing is to calculate if there is profit for you and say openly whether you can benefit or are uninterested,” she said.

“In politics, it is the other way round,” Khakamada explained. “Everything is vague; it is not clear where people’s interests lie. A person nods, agrees and then breaks the deal within three hours. They say one thing, mean something else and imply a totally different thing.” Professionally speaking, politics consists of endless intrigues, she explains. “As a businessperson, I found it hard in politics. It is hard for all businesspeople in politics.”