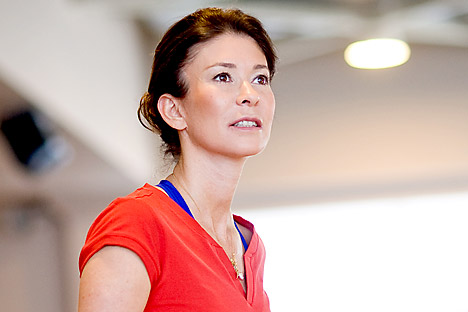 Olga Sloutsker: "I went to Spain on vacation with my then-husband and went into the hotel fitness club for a step aerobics session. I was shocked at the sports culture there: instead of the military-style physical training we were used to during the

Russia Beyond the Headlines: A successful athlete in the past, you decided to go into business. Why? And why did you choose fitness?

O. S.:  In the early 1990s, when the country started living a new life, I wanted to come up with something new. I had never thought of becoming a businesswoman. It happened accidentally, as is usually the case. As a professional athlete, I trained all my life in unheated, stuffy and scuffed gyms. We never then thought that it could be any different. I went to Spain on vacation with my then-husband and went into the hotel fitness club for a step aerobics session. I was shocked at the sports culture there: instead of the military-style physical training we were used to during the Soviet era, I saw people engaged in fun and happy sports in a clean gym while listening to music — this motivated you to take care of yourself. I came to Moscow and found out that there were no professional fitness clubs there. So I thought, why not try it for ourselves? We found a place and did it up — a lot with our own hands.

Olga Sloutsker was born in 1965 in Leningrad and began studying fencing at the age of 11. She fenced 12 years for the Leningrad City team and became a master of sports in fencing before retiring in the early 1990s. In 1993, she opened World Class, the first fitness club in Russia. Today, there are 37 World Class clubs in Russia and the C.I.S., and the company has developed other brands to appeal to different segments of society. Sloutsker later studied management at the Management School of the State Academy and has observed American and European fitness clubs to bring her clubs in line with international expectations. World Class has been named one of the world’s top 25 fitness clubs eight times.

RBTH: Where did you get the money? And how much did you invest?

RBTH: You started from scratch. How did people like your idea?

O. S.: The media gave us a hostile reception. I was expecting people to laud me when I came to the first press conference. But the response was just the opposite. The reporters started picking on me [asking] “How can you sell physical training?”I was lucky to make new acquaintances. I moved to Moscow from St. Petersburg and met up with artists, pop stars and film directors, who supported me with my idea . Also, it was a new trend; people didn’t know what fitness meant and we had to translate this word.

RBTH: Who were your first customers?

O. S.: They were some of the most successful people. The Abramovichs, for instance. I did not know Roman then. They were film stars, showbiz celebrities, first capitalists, first successful journalists, there were many politicians. They sensed the trend very well and they wanted change.

RBTH: How much did you charge for an annual pass?

RBTH: That is a lot of money even now, but at that time it was an exorbitant price.

O. S.: It was, but there was nothing else; we had no competition. Anyway, people were ready to pay for such a club in the center of Moscow, near the Kremlin, with many gyms and the best aerobics classes, fitness machines that they couldn’t find anywhere else.

RBTH: When did you break even?

O. S.: Very quickly. Things were very different in 1993. We broke even in less than a year.

RBTH: At some time you had to make a choice: to stay in the elite club segment, or expand your audience.

Related: Tourism and fun for $100 million

O. S.: I had a wonderful team, but I could not make all of them directors. I did not want to lose them, though. That’s when we decided to open a second World Class club. Then I got excited: new offers came in, and I felt that the team, too, had ambition to open new clubs. Our third, fourth and 20th clubs emerged. We established a regional department, to sell franchising contracts. Now we have clubs in 15 cities, including Khabarovsk, Vladivostok, Astana and Almaty.

RBTH: You could say that the Russian fitness industry was established by women. You were the first, then big new fitness networks appeared — also controlled by women. How would you account for this trend?

O. S.: Maybe our men are unwilling to spend time creating something from scratch. It is very hard work. At that time, many industrial companies were privatized, and you could acquire an oil field or buy into a big foundry without too much effort. Men must have chosen that way.

Or there could be a different reason. You know, World Class was the first company. Then we decided to set up a new one to manage cheaper clubs, called Planet Fitness. My director and fitness director were transferred there. A third company was created by my sales director’s wife. The Russian fitness industry could be not so much a women’s initiative, as women’s networks shooting out from World Class. We were working hard, living within our means, which is typical of women. We never split and grabbed state assets. We created this industry; we brought it here.