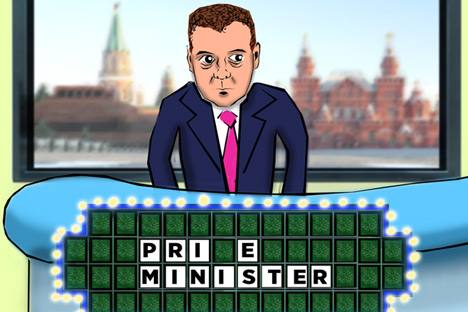 Dmitry Medvedev is expected to become prime minister as planned, but as a condition, many Putin loyalists will have to go.

Contrary to the rumors that the Medvedev-Putin tandem will fall apart once Vladimir Putin regains the presidency, Dmitry Medvedev is here to stay. Several high-ranking sources in the government and the Kremlin have confirmed that Medvedev will be prime minister until the end of Vladimir Putin’s presidential term. The talk about “big government” and a major reshuffle will remain just talk, though there will be several key changes and resignations.

The main change might be in the cabinet structure. According to a high-ranking source, the government will become “project-based.” Medvedev will have several deputies, who will not be in charge of departments, as is the case today, but will be responsible for various projects. For example, there might be a deputy prime minister for reform of the housing and utilities sector.

Many members of the old guard will be the first to be sent packing. Topping the list of candidates for dismissal are Emergency Situations Minister Sergei Shoigu and Transport Minister Igor Levitin. There will also be major changes in the fuel and energy department. Two sources have confirmed that Deputy Prime Minister Igor Sechin is likely to quit. A high-ranking government source says that this is the key condition set by Medvedev, who has had a running feud with Putin’s most loyal deputy. Along with Sechin, his protégé, Energy Minister Sergei Shmatko will also leave.

Personal chemistry will prevent former finance minister Alexei Kudrin from being in the government. “Kudrin got too carried away by the ‘White House without Medvedev’ game,” said a high-ranking government source. “But the government will not be without Medvedev, that is inconceivable. And there is no place in the Kremlin for a man of Kudrin’s caliber. What job could he do?”

Kudrin is expected to continue to develop opposition political projects and will probably find a common language with former presidential candidate Mikhail Prokhorov.

Of the current key figures, only Igor Shuvalov looks set to stay in the government. The senior deputy prime minister, who has been in charge of the economy in recent years, is expected to continue in this role. He will work with Dmitry Medvedev’s economic advisor Arkady Dvorkovich, although Dvorkovich is reportedly interested in working on education issues in the new government.

Whether the deputy prime ministers in charge of specific sectors will actually deliver depends on the individuals, but the idea is not new, according to Alexei Volin, a former deputy chief of staff. “It would be wrong to say that the housing and utilities complex is linked exclusively with the Ministry for Regional Development,” Volin said. “It also includes the Energy Ministry, the Tariff Service, the Ministry for the Economy, the Transport Ministry and the Communications Ministry. Who will settle the differences between them?”

The new plan is reminiscent of one during Putin’s second presidential term, in which none other than Medvedev was made deputy prime minister in charge of national projects. At the time, Medvedev was a member of cabinet of Prime Minister Mikhail Fradkov cabinet and was ruthlessly devoured by the apparatchiks. None of the national projects worked, partly because of the work done by these subordinates sabotaging any initiatives by the Kremlin appointee, according to a member of that presidential administration who did not want to be identified. Those who know the life of the government during those years have described a recurrent situation when ministers failed to show up for a meeting with Medvedev because the apparatchiks had scheduled a meeting with the prime minister at the same time. Ministers can sabotage the work of deputy prime ministers in a similar way. “When deputy prime ministers supervise specific ministries, they are the bosses”, another source close to the government reasons. “If a Shuvalov issues orders, the ministers gain room to maneuver and fulfill the orders of one and not the other. And let us not forget that the budgets are still in the hands of the ministries. It is a scheme that patently cannot work, there are no real instruments.”

Yevgeny Minchenko of the International Political Expert Institute believes that there is a more effective way to reform the cabinet structure: “The best way would be to get rid of the ministries with complex structures.”

First published in the Russian issue of Forbes.

By Russia Beyond the Headlines

Russia’s current President Dmitry Medvedev is expected to become the prime minister after Vladimir Putin takes over the presidency. If this swap takes place, will Medvedev be a strong and influential prime minister? Or will he continue to be the weaker partner in the tandem?

Georgy Chizhov, vice president of the Center for Political Technologies

“I don’t think that Medvedev was a bad president. He took the highest position in the government hierarchy and remained a close partner of Vladimir Putin. His presidency was pretty good because Russia came through the world financial crisis without serious consequences. Medvedev is highly likely to be appointed prime minister because the politicians discussed this scenario last fall [before the 2012 presidential elections]. The situation doesn’t seem to have significantly changed since that time. If Putin swaps with Medvedev, everything will fall into place. In this case Medvedev will deal with Russia’s economy and some modernization projects he has been focusing on. The question is whether he will be independent enough to form a new cabinet of ministers. Another question is how long he will stay in the position of the prime minister; if he will be able to make it until the end of Putin’s presidency. If he fails to improve Russia’s economic record, he might lose his position fast. I don’t rule out that in case of growing protests, Medvedev may be replaced. During Medvedev’s presidency, we couldn’t imagine the possibility of sacking a prime minister but this political scenario may be possible in the case of Putin’s presidency.”

Although predicting political appointments is risky because one can easily be wrong, I suspect Putin will nominate Medvedev as prime minister. He's already said so himself, and although changing his mind could be taken as a concession to his critics, I believe Medvedev's appointment would be more important as a concession to the [current] president's supporters who acquiesced to the decision he not run for a second term.

I don't believe Medvedev would make any better a prime minister than he is president. His main role has been to help enable Putin's policies by providing a false image of a reformer, and nothing he has said or done indicates anything will change. In any case, the premiership will return to its pre-2008 role: a toothless office essentially run from the Kremlin after power returns there with Putin.

“Medvedev may be one of the strongest prime ministers in the history of the Russian Federation because previously he had the presidential position. This experience may be very helpful. Yet it’s difficult to say if he will be the better prime minister than the president: it’s a matter of taste. But, definitely, he has the potential [to be a prime minister]. Of course, there is a certain political configuration and certain expectations of the Russian elite. Many pundits tend to describe Medvedev as a conflict political figure who would challenge Putin and create another alternative, but I think that Medvedev and Putin will remain partners and nothing will shake their political collaboration.”