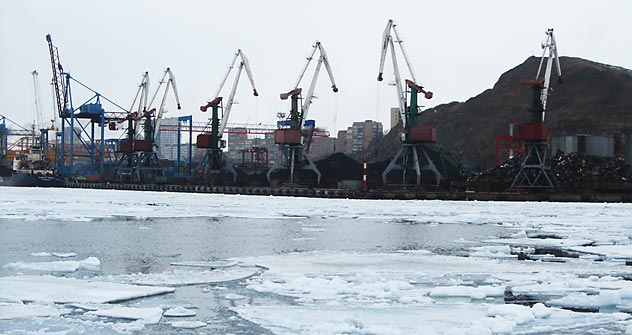 Preparations for the 2012 APEC summit are transforming Vladivostok’s skyline, but residents of this economically struggling city are worried about what will happen when federal funds run out.

In 1959, after a visit to California, Soviet leader Nikita Khrushchev called on the residents of Vladivostok to make it “our San Francisco.” Half a century later, Russia’s leaders are determined to realize his dream as the city readies itself to host the 2012 APEC summit this fall.

Similarities between the two cities jump in the face of any first-time visitor: the buildings and streets meandering up and down the hills surrounding Golden Horn Bay; the tramways dotting Vladivostok’s main thoroughfares; Chinatown; a booming harbor on the Pacific and the ever-present morning fog. Vladivostok even has a liberal-leaning political climate – Putin garnered 47.5 percent of the vote here compared to a national average of 63.75 percent.

Historically, the gradual migration of settlers from Russia’s more-populated Western regions across Siberia and to the terminus of the Trans-Siberian railroad at Vladivostok was not unlike the American Manifest Destiny.

Our home blazes in ecstasy,

These days Vladivostok blazes with welders’ flames as cranes dotting its hilly downtown reflect the billions of dollars the federal government is pumping into the city ahead of the APEC summit, scheduled for September. The development of the remote regions of the Far East will be discussed during the APEC CEO Summit 2012. The narrow, potholed road from the airport has been raised up to 10 feet in some areas and expanded into a modern, four-lane freeway; the new airport is scheduled to open this summer. Two Hyatt hotels are under construction, monuments, roads and facades have been repaired, an express train line from the airport to the city center will soon open and a new drama theater is almost finished.

One of the most impressive projects nearing completion is the bridge to Russky Island – the closest island to Vladivostok – and new campus for the Far Eastern State University. The 2-mile-long bridge, partially held up by masts standing on two artificially constructed islands, was started less than three years ago. The central mast reaches a height of 1,050 feet. When completed this summer, it will be the longest cable-stayed bridge in the world (price tag: $1 billion).

“When we talk about innovation and modernization, this is it,” said Alexander Ognevsky, press secretary for the Ministry of Regional Development, as he gestured toward the bridge. “A number of international companies left the tender because they said it couldn’t be done; in the end a firm from Omsk took on the contract. The technology and know-how they developed with this project will be applied elsewhere and even exported abroad.”

Russky Island houses defense installations and is home to several thousand retired military men and their families. It was a quiet, off-limits district until then-President Vladimir Putin supported a plan to merge four of the major universities in Vladivostok into a single institution and house it in a new campus. To say that an entirely new city has been erected in less than three years is no understatement: a previously empty 160 hectare plot of land has been developed into roads, dormitories, cafes, gardens, stadiums, hospitals and what is expected to be the world’s third largest oceanarium by between 8,000 and 16,000 mostly Central Asian laborers working round-the-clock.

Russky Island will be the venue for the upcoming summit, after which the campus will be transferred to the Far Eastern State University.   “Russia is experiencing a demographic decline, and universities nationwide are facing a shortage of students,” said Vladimir Miklushevsky, who was until recently the university’s rector. “That’s why we’re studying markets like China, Indonesia and Vietnam to attract students. We have to find our niche.”

Authorities hope the impressive campus and generous state grants provided to federal universities will attract the brightest minds from around the world and establish several strong schools in fields like biomedicine and I.T. Plans for a technopark to commercialize products coming out of the university and create additional jobs are in the pipelines; a Special Economic Zone for tourism may be set up on Russky to take advantage of the lush beaches, which students of the University will have at their disposal).

“I have to hand it to the authorities, when they started building all this stuff, nobody – including myself – believed it would be completed, especially not in time for the summit,” said Avchenko. “Now it’s clear they succeeded in doing what they promised.”

But the success is mostly dependent on the hordes of construction workers rebuilding the city. All contact with the workers has been strictly off-limits to journalists.

“They’re afraid the workers will tell you about how they’re treated,” said Bakhodir Nurakov, a young Uzbek who has been working to protect the rights of the workers in the region through a Vladivostok NGO that helps immigrants and their employers in the face of official abuse. Nurakov’s gripe is not with the entire project, but with certain contractors who abuse a rule allowing them to legally employ immigrants for 90 days without providing them with a long-term work permit. “They promise to pay them for the first 90 days, and then simply fire them. At that point the workers have no legal recourse because they become illegal immigrants,” he said. “Some of them want to leave altogether, but don’t have the money for a ticket. They have to keep working so they can eat.”

A dark, even less visible story has to do with the region’s demographic decline. Over the last 20 years, 300,000 people have left for more hospitable regions of Russia or abroad – that’s half of Vladivostok’s already sparse population.

“Of the students I know who are studying Chinese, no fewer than two-thirds want to pursue their careers abroad upon graduation,” said Victor Larin, Director of the Institute of History, Archaelogy and Ethnology of the Peoples of the Far East. “Most of the city’s infrastructure is in shambles. Roads are falling apart; there’s nowhere I can go for a walk with my wife. The key to getting people to want to live here doesn’t lie in building bridges to nowhere.”

“Everyone’s concerned about what’s going to happen after the summit passes,” said Avchenko. “We practically don’t even have a local seafood industry. This is especially sad given that not long ago local seafood factories like DalMoreProdukt – which went bankrupt a few years back – were nationally famous. We should have lively, thriving fish markets and seafood-themed cafes. I wish Vladivostok could be known as the “fishiest” city in Russia – in a positive sense! – and people would come here to sample the local cuisine.”

In mid-March, a crowd of eager journalists crowded in the 1st floor marble hallway of the towering white-colored State House in downtown Vladivostok amid typically dreary morning weather. They were awaiting the results of the legislature’s vote over the candidature of the 44-year-old Vladimir Miklushevsky for the post of governor. The previous governor, Sergei Darkin, had been abruptly dismissed by President Dmitry Medvedev just weeks earlier after a decade in power. The news came as a shock to many locals, who credited him with lobbying through many of the federal funds pouring into Vladivostok.

Miklushevsky was voted in by a wide margin, which came as a surprise to no one; he had promised to make transparency and fighting corruption a cornerstone of his governorship. Speaking to journalists after the vote, he announced “we have to base our long-term development on the scientific and educational resources we have at our disposal, especially the Far Eastern branch of the Academy of Sciences and the Far Eastern Federal University.”

"The APEC summit will have a direct impact on the long-term development of Vladivostok," Miklushevsky told RBTH. “The 200 billion rubles (nearly $7 billion) of federal funding coming here will improve infrastructure,  a lack of which is a barrier to investment (not only in Russia). It also put Vladivostok on the world map and make it known throughout APEC. We can't miss this opportunuty."

“He’s a good manager and is not tied to the local business and criminal elites,” said Avchenko. “But I question how much of a difference one individual can make in Russia’s current political system – a lot has to be changed in the economy, laws and especially the application of laws. On the other hand, places like Singapore show it’s possible.”

“But I definitely have a feeling of lost potential concerning Vladivostok’s development, especially over the last two decades,” he continued. “This concerns the economy, cultural life and basic quality of living. I hope that we’ll stop losing people and realize the enormous potential that our city has inherited. Only time will tell how justified my hopes are.”