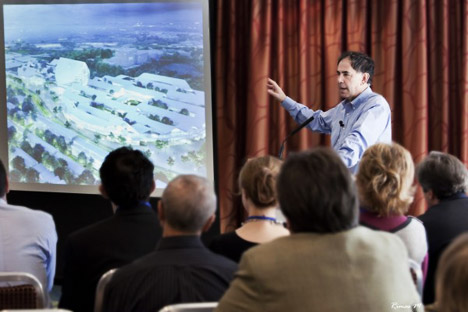 Edward Crawley, a MIT professor invited to Skolkovo University, taking the floor at the First International Forum of Russian-Speaking Science and Technology Professionals, which took place in Cambridge in mid-March. Source: Press Photo

The brain drain problem is as relevant for Russia now as it used to be during Perestroika. Some experts argue that the trend is catastrophic, pointing to the increase in the numbers of researchers leaving the country. The Russian government believes that the Skolkovo Innovation Center is capable of at least slowing, if not reversing this situation.

“Skolkovo is a Russian exclave – that is, an area that should be treated separately from the Russian context. Skolkovo is a place where everything positive that is Russian can be realized,” said Oleg Alekseev, Vice President of the Skolkovo Foundation, at the First International Forum of Russian-Speaking Science and Technology Professionals, which took place in Cambridge in mid-March. According to Alekseev, the Skolkovo Innovation Center and the Skolkovo Institute of Science and Technology (SkTech), can become the decisive factor for young Russian specialists and researchers in deciding whether to stay at home or seek their fortunes abroad.

Nevertheless, representatives of the Russian scientific community seem to have no clear vision for what the institute and the innovation center will someday produce. “First, we need to identify our strengths. Not a single innovation center can say for sure that it is doing absolutely everything better than its counterparts. We are still divided as to our main strength in the international division of labor,” Alekseev said.

And there are still many challenges on this point. When weighing all pros and cons of moving to Russia or of Skolkovo outsourcing opportunities, nearly all of the participants in the Cambridge forum mentioned corruption. On the sidelines of the forum, physicist Vyacheslav Safarov, the president of the Russian-speaking Academic Science Association (RASA), who lives in France, suggested that the Russian scientific diaspora work out a Charter for Proper Conduct, declaring the need to upgrade the grant distribution pattern. “I guess that, if we were involved in this process, the Russian system might be cleansed of kickbacks and non-transparent money distribution,” Safarov said. Russian scientists, too, are most of all concerned about the mechanism of state support for scientific research – last October, several hundred scientists took to the streets to demand a reform of the existing pattern.

Skolkovo representatives spoke frankly about this problem in Cambridge. “We cannot be certain that corruption will not be part of the decision-making process; yet, I hope that the scientific part of our work will be free from it, especially as far the provision of grants to innovative companies is concerned,” Alekseev said.

But however successful and transparent Skolkovo might be, the innovation center alone cannot deal effectively with the brain drain problem. In order to buck this alarming trend, a package of arrangements is required for improving the environment for scientists in Russia. To take one example, chemists working in the West receive the chemical agents they need for work within three days, while Russian researchers may have to wait up to three months because of customs problems.

Even so, the Russian scientific diaspora is increasingly interested in Russian projects. Andrei Gudkov, Chief Scientific Officer at a large oncology institute in Buffalo, New York, whose two pharmaceutical companies are registered in Skolkovo, knows firsthand that it is far cheaper to design a medicine in Russia than in the West. Additionally, “this country is open to crazy projects,” Gudkov said. “In the United States and Europe, you are supposed to produce results first and then receive a grant, whereas in Russia, you need one of the local oligarchs to like you – we could call them angels in this context.”

Gudkov believes the immaturity of the Russian legislation is actually an advantage for working in the country – Russia has no system for clinical trials of new medicines like the American one. “In Russia, you can take your new medicine to the patient much faster and, provided you are successful, repeat the project in the West,” Gudkov said, adding that, if the Russian authorities paid close attention to the legislative rules in the pharmaceutical sector, it would be in for a “real catastrophe.”

Gudkov is not the only Russian émigré interested in working “back home.” Many representatives of the Russian scientific community are considering returning to the country or at least establishing cooperation with Skolkovo in order to start implementing their projects there or give lectures to the students at SkTech. Viсtor Kalinin, who left Russia in the mid-1990s, is one of them. “I left at the time when there was almost no chance for me to continue my research. The industrial sector collapsed, funding was stopped, and business did not seem to require innovative solutions. I thought then that teaching in a school would be the beginning of degradation. So I decided to engage in research at Oxford, thinking I would get back to Russia in two or three years. But the situation at home just got worse,” Kalinin said. A few years after he moved to the UK, the researcher became chief scientist at Transense Technologies, an innovative company, where he works now. “The problem is that, sooner or later, such companies enter a phase where they focus on commercialization of old developments rather than new research. But it is research that attracts me most. Also, I miss teaching a lot,” Kalinin said, adding that “getting back to a Russian university would be twice as satisfying.”