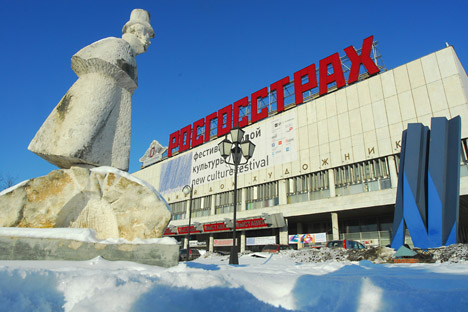 The Central House of Artists (TsDKh) is the largest exhibition center in Russia.

The idea of establishing such a center first emerged in 1956 and initially involved the construction of two separate buildings – one for the Union of Artists of the Soviet Union and the other for the Tretyakov Gallery. Eventually they were merged into TsDKh, which also houses the modern wing of the Tretyakov Gallery. Construction began in 1965 and in November 1979, TsDKh was inaugurated.

After the break down of the Soviet Union, at the beginning of the millennium, TsDKh shifted its focus in a different direction and became with Vassili Bychkov as director a venue and producer for numerous highlights in annual events calendar, such as the international contemporary art fair Art Moscow, the International Fair for High-Quality Fiction and Non-Fiction, the Moscow International Open Book Festival, the Antique Salon, the Christmas Gift Fair, architecture festivals and hundreds of exhibitions, concerts and screenings.

Number of exhibitions per year — more than 300

Christina Steinbrecher is the new art director of TsDKh, as well as the art director of Art Moscow and Executive Director of the Innovation Contemporary Art Award. She assumed the position of TsDKh art director in November 2011, and in January 2012, ART24 project was launched, aimed at creating a full time program for contemporary art.

The ART24 project consists of three key elements. First, the lobby of TsDKh will be turned into an exhibit hall for contemporary art. “All TsDKh visitors have to go through the lobby, as there is no other way to get into the building. This means that to introduce contemporary artists to different groups of people, regardless of their age and taste, we have to display their works at the very entrance of TsDKh,” Steinbrecher said.

The second component involves uniting younger artists with artists of an older generation in joint exhibitions. Steinbrecher does not like older artists to be referred to as conservative. “Even though their names have been somewhat forgotten lately, they nevertheless continue to produce impressive works of art,” she said. Selecting pairs for joint exhibition usually involves a young artist choosing a partner from the older generation whose works create a dialogue with their own based on either the contrasts or similarities. “Since not all the artists are on friendly terms, it’s best to give them the opportunity to choose who to work with, rather than to try to unite them artificially,” Steinbrecher said.

The third element is about developing a space below the colonnade that would be accessible to the public 24 hours a day. This is where the project name – ART24 – comes from. “The Park of Arts surrounding TsDKh is a fairly large outdoor recreation area in Moscow, and we want people to have things to do there and somewhere to look. For instance, the park and the space below the colonnade offers a spectacular view of the Moscow River, so why not equip the space and put up benches where people can sit down and read a book?”

The participants in the ART24 project are Russian and few international, but this fact has nothing to do with the project philosophy. Rather, it’s due to the current lack of funds necessary to attract highly acclaimed international artists. When asked about funding, Steinbrecher said: “The entrance fee provides us with a minimum budget for building maintenance, putting up advertising and inviting the media. To finance all our other needs I have to look for sponsors, asking for help from anyone and everyone, from car companies to healthcare organizations. I contact them and ask for money to support young, talented artists.”

Investing in art in Russia

184 are contemporary art galleries, of which

Despite the law enabling Russian investment funds to invest money in art as of January 2010, none of them have been in a hurry to do so. The share denomination (the asset value that provides for one investment unit upon establishment of a unit investment fund) of such investment funds cannot be less than 500,000 rubles ($16,700), which means that only the well-to-do can afford shares in such funds. Russia has never seen these kinds of funds until now. Despite the existence of special websites for art investments, these funds cannot be classified as a full-fledged and investor-friendly financial tool. Unlike the stock exchange trading system, these investments are hard to standardize and popularize. Another obstacle is the absence of yield indexes in Russia: investors have to be guided by auctions, and Russia has only 8-10 auction houses (by comparison, Cologne alone has four auction houses). In addition, many believe that investing in art requires a specialized art education, which narrows the number of potential investors.

Moreover, Russia’s art investment market is quite young. It was officially legitimized just 20 years ago. Individuals and banks are only now beginning to join the global trend. Russians are increasingly interested in art as an asset and as a source of certain intangible benefits, namely access to elite social circles and good connections. This offers hope that art investment in Russia still has a chance to survive.