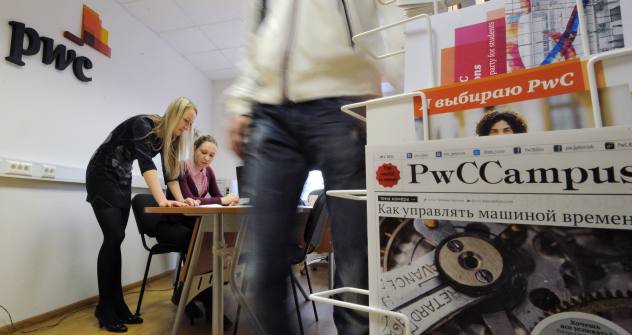 PricewaterhouseCoopers (PwC), one of the big four international accounting firms, has departments at Higher School of Economics (HSE) and at the Financial University under the Government of the Russian Federation. Source: Kommersant.ru

More and more firms – both Russian and foreign – are placing instructors in Russian universities to make sure that graduates are prepared for the workforce.

More and more, students entering university today want to know not only what career they will be pursuing after graduation, but even exactly where it is they'll be working. Indeed it has become far easier than in the past for Russian college students to meet their future employers. Corporations, dissatisfied with the content and quality of higher education, have begun working with universities to ensure that the human resources they need are properly trained. And any institutions of higher learning that have nothing to offer the business world may not be around much longer.

Related: More or less a specialist?

Kirill Voronov, a fourth-year student at the Higher School of Economics (HSE), has no reason whatsoever to worry about finding a job when he finishes school: He is almost certain to be hired by PricewaterhouseCoopers, one of the big four international accounting firms, where he is currently interning. The consulting giant has employees who teach at the HSE and PwC has a department at the Financial University under the Government of the Russian Federation.

Gazprombank project analyst Tatyana Sorokina also caught the eye of her future employer when she was a student: before graduating from the Moscow State Institute of International Relations (MGIMO), she entered their corporate stipend program, then was recruited for an internship, and finally, in 2009, she was hired full time. The Gazprombank hiring process has now become even easier for students graduating from MGIMO; last year the bank opened its own department, the Economics and Banking department, at the MGIMO International Institute of Energy Policy and Diplomacy. Specialists from the bank as well as senior executives teach classes at the university.

How do companies become involved with universities? Few of them start right out with their own sponsored chairs or departments. Nikita Rakov, who handles relations with universities for PwC, described how his company’s decision to open its own departments grew out of a lecture series PwC consultants and accountants began giving at the university several years earlier. Later these were simply grouped into a single department. It is noteworthy that PwC and its direct competitors among the big four accounting firms each have their own departments at the very same schools: the HSE, for example, also has Ernst & Young and KPMG departments. Specialists from competing companies teach the same students, but they arrange for their courses not to cover the same subject matter.

Major companies in the IT field are keeping pace with the accounting firms, although experts believe that Russian IT startups have only recently reached the level where they can allow themselves to take this approach to training personnel.

“Only practice can provide practical experience in software engineering," said Alexander Tormasov, head of the Parallels scientific research program and a professor at the Moscow Institute of Physics and Technology (MFTI). “That’s why we not only provide our employees an opportunity to teach, supplementing their university salaries, but we also recruit students for on-the-job training. Without this, IT majors generally earn money as system administrators during their student years, and then they remain in this area after graduation, having wasted valuable time on work that is less skilled than software development. So we offer them a chance to do scientific research work on the basis of state-of-the-art technologies, paying a stipend of up to 24,000 rubles ($820), which is about the same as they could make as a non-payroll system administrator."

Another factor driving employers to the universities is the shift of many education programs to the double-degree, bachelor's-master's system. “Potential employers were just as unprepared for these changes as were the university teaching and administrative staff, and the students themselves,” said Vadim Saralidze. “Someone with a B.A. should essentially be considered a specialist with a higher education, but that graduate has not actually acquired the specialization he needs, and has patently inadequate knowledge and skills." On the other hand, dividing the program into two degrees gives employers room for maneuver, and many of them have taken the route of setting up their own master’s programs.

Companies incur certain costs when they invest money in creating their own departments or corporate universities, or even just by assigning a highly paid specialist to assume teaching duties. The idea is that the invested funds will be recouped through the students themselves, for example, by their signing pledges to work a specified number of years at the company sponsoring them. In practice, far from all companies impose such requirements.

“Although our terms do not include a requirement that a candidate stay and work at Yandex after finishing school, most of the students do become our employees. The rest of them find interesting work at other companies, which promotes the overall development of the Runet. So we think the return on our programs is above the breakeven point,” said Artem Babenko, head of the Yandex School for Data Analysis group.

For major companies, the money spent on this type of project actually doesn’t loom terribly large. For example, oil major LUKOIL spent around 90 million rubles ($3 million) on support to universities in 2010. Usually companies don’t even supplement the university salaries of their employees who are on a teaching assignment away from their main job. As for the payback, Ernst & Young managing partner for Russia Alexander Ivlev noted that even if students who have received a high-quality education don’t subsequently go to work for their sponsoring company, they may later become its customers. On the whole, companies are not worried about building a human resources pool for their competitors, as well as themselves.

It is obvious that having a base to support practical experience, along with prospects for future employment, is becoming an increasingly significant competitive advantage for institutions of higher education. “When we reach the practical training stage, it’s always an awful headache,” said Andrei Semyonov, course supervisor at a commercial school that does not have its own base. “If the student himself has found a company where he can do on-the-job practice with good results, then he has lucked out – even more so, if he can get a job there later. If not, then of course we’ll find somewhere to send him, but the host companies will not be promising ones, from a career standpoint. My older son is entering college this year, and for me the main criterion for choosing a school is to make sure he’s not going to graduate with a diploma to nowhere.”

In the view of Dmitri Yendovitsky, chairman of the Council of University Rectors in the Voronezh Region, institutions of higher education that cannot bring employers into the educational process will disappear very soon.

“There are three basic phases of evaluating the work of a university," said Yendovitsky. “At entrance, it's the average grade on the standard test. This indicates the status and prestige of the university, because the entering students have voted with their feet. Then there are process evaluations: the quality of education, degree of diversity in the curriculum, and number of innovational projects implemented. At graduation, there is the issue of how much its graduates are in demand. The degree of business community integration into university processes is a factor influencing all three criteria for evaluating a university's work. Institutions of higher education that lack serious joint projects with the business community should gradually merge into the larger universities on which the system is based.”