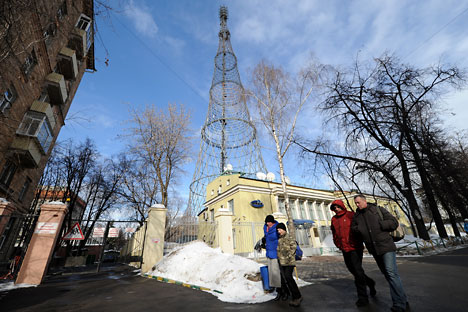 An architectural monument in central Moscow was the work of the same engineer who made transporting much of Russia’s oil and gas wealth possible.

The Shukhov Tower in Moscow turns 90 this year. In terms of both beauty and the audacity of the engineering concept, the tower on Shabolovka Street is not inferior to the Eiffel Tower in Paris and, unlike the latter, it found favor with local residents from the start. But now the Eiffel Tower is surrounded by crowds of tourists, while the Shukhov Tower is surrounded by barbed wire. The tower is recognized worldwide as one of the most beautiful and outstanding achievements of engineering. For example, the exhibit L’art de l'ingénieur (The Art of Engineering) at Centre Pompidou in Paris used the image of the Shukhov Tower as a logo, and a gold-plated, six-metre-tall mock-up of the Shukhov Tower was installed at the exhibit "Konstruktion und Raum in der Architektur des 20. Jahrhunderts" (The Best Designs and Buildings of 20th Century Architecture) in Munich in 2003.

Related: How to deal with art in Russia

In 1896, at the National Exhibition of Industry and Art in Nizhny Novgorod, Vladimir Shukhov presented eight giant pavilions with groundbreaking lattice steel shell structures and the world’s first hyperboloid lattice shell tower, a predecessor of the Moscow tower. He had obtained a patent for these structures a year before.

The hyperboloid of revolution was a completely new surface that had never been used in construction. It allowed for building a curved lattice shell of straight rods installed at an angle. The result was a lightweight, rigid tower structure that could be designed and built with ease and elegance.

Shukhov received an order to design the radio tower soon after the Soviet Union was established; the new country needed a tower for broadcasting. In February 1919, Shukhov presented his first projection and calculations for a 350-meter tower weighing 2200 tons. (For comparison, the Eiffel Tower in Paris stands 305 meters and weighs 7300 tons.) However, due to the metal shortage brought about by World War I and the Russian Civil War, the initial project had to be rejected and the tower was shortened by half.

The tower was a further modification of the hyperboloid lattice structures and consisted of six units, each 25 meters tall. The base diameter was 40 meters, proportionally decreasing with each subsequent section. The tower was built using the telescope method, without scaffolding or cranes. Upper sections were assembled one by one inside lower ones, and then pulleys were used to stack them on top of one another. In mid-March 1922, the radio tower was commissioned and has been in use ever since. Thanks to its airy structure, the steel lattice shell of the Shukhov Tower experiences minimum wind load, which is a major threat to high-rise structures.

In many ways, Shukhov’s legacy helped define further development trends in world architecture. His ideas have been used in the designs of renowned architects such as Santiago Calatrava, Frank Gehry, Oscar Niemeyer and Antonio Gaudi. Today, the construction of unique tensile and lattice shell structures is being developed by the architecture schools of Frei Otto and Norman Foster. The hyperboloid tower principle was used to build the world’s tallest TV tower in Guangzhou, China (610 meters).

But even if Shukhov had not proposed these architectural and structural solutions, he nevertheless would have left a mark on history as the inventor of the world’s first industrial facility for petroleum-cracking, tubular boilers, pneumatic lifts and the kerosene spray burner, as well as the creator of the designs and technical director for the construction of Russia’s first oil pipelines.

In the 1920s, the U.S. company Sinclair Oil protested the exclusive right to the invention of petroleum-cracking claimed by Rockefeller’s Standard Oil. The protest indicated that the patent of an American engineer, Burton, used by Standard Oil was a variant of Shukhov’s patent. In 1924, an American delegation paid a visit to Shukhov in Moscow to verify this assertion. Shukhov proved to the Americans that Burton’s method was in fact just a slight variation of Shukhov’s own patents, granted in 1891. This precipitated a long series of legal battles in America. The result was an amicable settlement, which the American companies reached to avoid having to buy a patent from the young Soviet state.

Incidentally, Shukhov also visited the United States. He traveled to the country after graduating from the Imperial Moscow Technical School for a yearlong apprenticeship to learn about the latest technical achievements. The young engineer visited the World’s Fair in Philadelphia, where he was enraptured with the numerous technical innovations, visited machine-building plants in Pittsburgh and studied how American rail transport was organized. Later, back in the Soviet Union, he took an active part in establishing the Russian railway network, focusing on the construction of railway bridges.

Today Shukhov’s name in inextricably linked with the tower, which, sadly, is in desperate need of repairs. Shukhov Tower Foundation President Vladimir Shukhov, a great-grandson and namesake of the engineer who designed the tower, considers its current condition no less than an insult, especially since the designer loved precision and beauty in everything.

In the course of an unofficial contest held by the Shukhov Tower Foundation, students from architectural colleges developed a number of proposals for land improvement projects around the tower. The most popular idea was to turn the area into a park and build an underground Shukhov Center and a museum of Russian oil, gas and pipeline transport. Implementation of the project would cost $1 billion. This is no small amount, but there is hope that Russian businessmen working in the petroleum industry could help finance the undertaking. After all, they owe Shukhov many thanks.

Shukhov's High-tech architecture in Moscow - 1922 from Russia Beyond The Headlines on Vimeo.