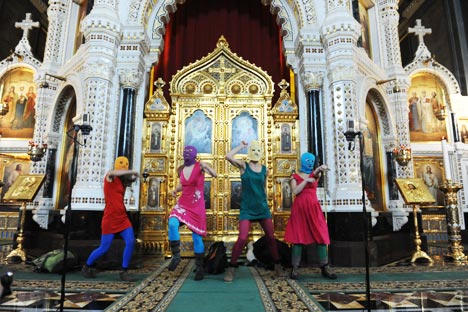 Russian feminist punk rock band Pussy Riot became popular overnight after it staged an unsanctioned performance in Moscow’s Cathedral of Christ the Savior. Society, church and law are divided over how they should atone for their sin.

On Feb. 21, 2012, five young women in masks tried to stage an improvised performance at the Cathedral of Christ the Savior in Moscow, chanting: “Virgin Mary, Mother of God, Expel Putin!” The song lasted for less than a minute and was stopped by the cathedral’s security service. The act had taken place in the closed area behind the icon screen where the altar is located and only priests and other church officials – all men – are allowed.

A criminal case against the members of the group, known as Pussy Riot, was opened by the Moscow police on March 2. They are being charged with hooliganism, which could result in up to seven years in prison and put the women on the wanted list. On March 4, two Pussy Riot members, Nadezhda Tolokonnikova and Maria Alyokhina, were arrested, and a bit later, Yekaterina Samutsevich,was detained. The three women will remain in custody for 60 days pending the results of the investigation.

The prank by Pussy Riot caused a wide response and split public opinion, both secular and religious.

Typically of contemporary Russia, Internet blogs featured the most intense discussion. “I won’t be asking whether pranks of this kind should be pardoned/encouraged in mosques and synagogues, not just in Orthodox churches. But hooliganism remains what it is even in a library, doesn’t it?” writes blogger pioneer-lj.

“You shouldn’t beat Pussy, although you can, if necessary. But if you are Christians, give them pancakes, or better still suggest a fast. Troublemakers are always embarrassed when you treat them mercifully,” noted blogger Maksim Petrenchuk.

These examples highlight the two main trends in the Runet blogosphere: calls for “understanding and forgiving” and demands for “punishment and justice.”

The administration of the Russian Orthodox Church and a considerable number of believers demanded that the feminists be punished and called on society to condemn the prank and brand it as a crime. Official spokespeople for the Russian Orthodox Church said that they saw no need to keep Tolokonnikova, Alyokhina and Samutsevich in custody or to pass a real prison sentence on them, and pointed to the fact that the investigation was working independently of the Church. But Patriarch Kirill of Moscow and All Russia considered the attempts to excuse the activists to inadmissible. “We have no future if we start mocking at great shrines and if some people consider this mockery to be a kind of bravery, a proper expression of political protest, an appropriate action, or innocent joke,” the patriarch said.

For its part, the Interfaith Council of Russia (which unites Orthodox, Islamic, Buddhist and Jewish organizations) called on Pussy Riot to repent in public. However, supporters of the band disagreed, causing an even more radical response by Orthodox Church officials. In some Moscow churches, appeals were read out encouraging believers to support the demand of a criminal penalty for the feminists.

There have also been appeals for leniency, though. Vladimir Legoida, chairman of the Synodal information department of the Russian Orthodox Church, sees no reason for the women to be kept in custody and insists that everything should remain within the bounds of the law: “The Church has called for mercy at all times. This situation is not an exception. A part of society has formed a false opinion that the guilty women are kept in custody at the insistence of the Church, which is not true. Furthermore, the media and the public are emphasizing that some of these women have little children. Those who took part in that action seem to be unaware of the gravity of their offense and are attracting sympathy. It is good that our society is still capable of sympathy and forgiveness, even when its feelings have been so hurt.”

Sergei Smirnov, an attorney with Yukov, Khrenov and Partners Law Office, does not believe that criminal charges are applicable to the actions of the Pussy Riot activists: “There are material elements of an administrative crime, subject to ‘disorderly conduct’ charges. Therefore I believe that keeping them in custody as a pre-trial restriction and bringing criminal charges of hooliganism is ungrounded and fails to correspond to the gravity of the offense. However, the 60-day restriction term is normal practice; there is nothing too severe here. When the investigation insists on custody as a pre-trial restriction, the court normally opts for two months. It is hard to say what will happen later. Unfortunately, judging from our practice of criminal law administration, if a case comes to trial, and it is not a trial by jury (as in this case), then it will likely end in a guilty verdict.”

Pussy Riot’s lawyer Violetta Volkova said that in the event of an guilty verdict, she would appeal to the European Court of Human Rights in Strasbourg. “No cases of this sort have ever been qualified as criminal offences before,” she said.