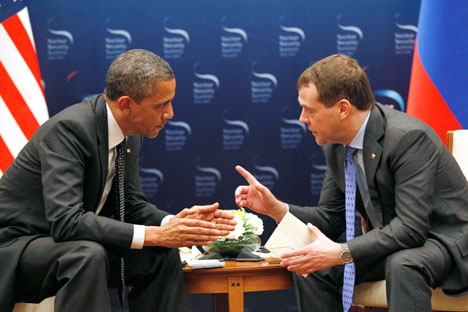 Although Dmitry Medvedev calls U.S.-Russian relations at an all-time high, both sides remain entrenched over defense systems in Eastern Europe.

Russian-U.S. relations are at an all-time high, President Dmitry Medvedev told President Barack Obama at a nuclear security summit in Seoul, South Korea - but not high enough, it seems, to find a common stance on deployment of missile defense in Europe

Medvedev insisted however, that there is still time to negotiate.

“We talked about the fact that time is not wasted, cooperation and discussion of all aspects related to the implementation of the idea of European missile defense should be more active," Medvedev said following the meeting, the last the two leaders will have as presidents.

"We agreed that now is the time for technical experts to become involved. In any case, of course, our respective positions remain the same but dialogue on this subject is not only possible, it is also necessary. Speaking very bluntly, we still have time to negotiate and reach a balanced decision, bearing in mind the good experience that Barack and I have gained during the preparation of the [New] START Treaty,” Medvedev said.

President Obama said Russia and the United States have a lot of work to do on many issues.

"Now is the time when our technicians, our team, will begin discussions on technical issues," he said commenting on missile defense.

Russia and NATO agreed to cooperate on a European missile defense system at the NATO-Russia Council Summit in Lisbon in November 2010.

Russia believes that the development of the concept and architecture of European missile defense should be implemented on an equal basis and provide adequate confidence-building measures and transparency in terms of defense.

U.S. officials have repeatedly said the missile defense system would not be directed against Russia, and that the U.S., NATO and Russia would benefit from its strategic capacity and cooperation.

Moscow wants the U.S. and NATO to sign a legally binding written agreement that European missile defense would not be directed against Russia.

The Kremlin has also sought to clarify the role the United States thinks it will have in European missile defense.

NATO and Washington insist the defense system will not be used against Russia, however, they have so far declined to give a written guarantee.

Obama said on Monday he was aiming for "a world without nuclear weapons" and directly appealed to North Korea and Iran not to develop them, the BBC reported.

Speaking at Hankuk University before the summit, Obama also pledged to work with Russia and China.

Missile defence forces and the system overall should fit the stated purpose of countering possible missile threats from beyond Europe, and I stress this point – beyond Europe. No one has yet explained to me clearly why we should believe that the new European missile defence system is not aimed against us. On the contrary, we are always being told, ‘This system is for you, not against you. Use it too’. But how are we to use it? Whichever way you look at it, it upsets nuclear parity.
Dmitry Medvedev at the conference organized by the Russian Council of International Affairs

Obama said "serious sustained global effort" was needed to protect the world from the risk of nuclear terrorism.

Obama addressed North Korea's nuclear ambitions, saying that his country has ''no hostile intent'' towards Pyongyang, but added that ''there will be no rewards for provocation.” He said North Korea had better give up its plans to launch a long-range rocket to put a satellite in orbit.

''You can continue with the road you are on but we know where that leads,'' he said, according to the BBC.

Regarding Iran, Obama said the problem over its nuclear program could still be resolved through diplomatic means but warned the Islamic republic that “time is short.”

''Iran must act with the seriousness and sense of urgency that this moment demands,” he said.

Medvedev said in the last three years, Russian-U.S. relations were the best they had been in decades, despite differing views on the success of the “reset."

The U.S. President described their meeting as highly productive, noting achievements in the last three years including the New START treaty.

Obama accepted an invitation from Medvedev to visit Russia after the U.S. presidential elections.

“Of course I would like to visit St. Petersburg but I’m afraid I'll have to do it after the election,” Obama said.

“It gives me great pleasure to meet with my colleague, Barack Obama, and it seems to me that the understanding that we gained over the years has helped solve a number of important bilateral and international issues," Medvedev said.

"I hope that this relationship will remain between Russia and the U.S., between the leaders in the future. That is why, using this opportunity, I would like once again to invite you, Barack, to visit Russia. I know that this is an election year and it’s a difficult year. We have a lot of good places. I invited you to St. Petersburg and on my own behalf and on behalf of President-elect Vladimir Putin, I invite you again,” he added.

Obama also thanked President Medvedev for the cooperation the two leaders had acheived, saying that he could not wish for a better partner.

“What concerns cooperation between our two countries, it is extremely important for peace and stability in the world, and in this work I could not even wish a better partner than Dmitry, who helps to strengthen our relationship," Medvedev said.

"I have no doubt that in his new job he will continue positively influence on what happens in the world and will work to strengthen relations between our countries,” Obama said after meeting the Russian President.
Russian President-elect Vladimir Putin has said he would nominate Medvedev as a candidate for the post of Russian prime minister.