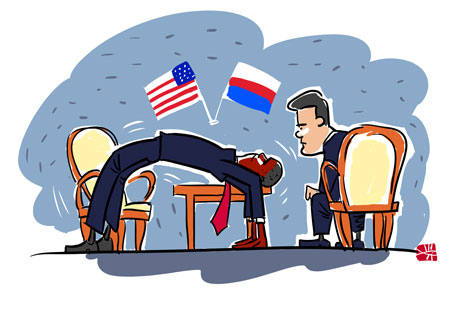 The Seoul Nuclear Security Symposium provided a set stage for the last summit between Russian President Dmitry Medvedev and his U.S. counterpart Barack Obama. Speaking for the media after a 90-minute meeting, both leaders used the opportunity to showcase positive developments in U.S.-Russia relations -- the New START treaty and Russia’s accession to the WTO, in particular -- that have taken place over the past three years under their stewardship. Both spoke about the urgent need to jumpstart economic and trade relations between the two countries. Both paid tribute to the good personal chemistry that helped them keep the “reset” in U.S.-Russia relations on course.

The problems that divide Moscow and Washington were mentioned too. One of the most acute is a disagreement over approaches to ending violence in Syria; another, more chronic, is the lack of a shared vision on the architecture of European missile defense. Choosing his words very carefully, Medvedev acknowledged that at the moment, Russia and the U.S. are taking dramatically different positions; yet he argued that a room for a compromise still existed. Obama concurred by saying that time was right for experts from both countries to begin detailed discussions on the technical aspects of this complex issue.

But any substantive discussion in the Medvedev-Obama rendezvous was overshadowed by a gaffe that the media pounced on: chatting without interpreters between the conclusion of their one-on-one and the beginning of the media briefing, the presidents did not realize that the microphones were already on. Continuing the conversation, and referring apparently to Russian President-elect Vladimir Putin, Obama was heard saying to Medvedev: “On all these issues, particularly on missile defense, this can be solved but it’s important for him to give me space.” “I understand. I understand your message about space. Space for you,” Medvedev responded. “This is my last election,” went on Obama, “After my election I have more flexibility.” “I understand,” again replied Medvedev, “I will pass this information to Vladimir.”

Gaffes at such a high level are bound to have domestic repercussions. Medvedev got away lightly: his critics in Russia took advantage of the “pass this information to Vladimir” line to highlight the president’s lame-duck status. But Obama found himself in hot water: the Republicans accused him of readiness to make concessions to Russia that could undermine the strength of U.S. missile defense. House Speaker John Boehner (Republican-Ohio) said he would be curious to hear what the president meant by “flexibility.”

The leading GOP presidential candidate Mitt Romney immediately jumped into the ring and described Obama’s comments “an alarming and troubling development;” he went further, calling Russia the United States’ “number one geopolitical foe.” Romney’s joy over Obama’s gaffe is understandable: he had a terrible week -- with his own adviser comparing him to an Etch-A-Sketch toy. Plagued with perennial accusations of being too “flexible” on issues, Romney was all too happy to hang onto something he has never wavered over: his opposition to Obama’s Russia policy, beginning with the New START treaty.

If Obama has learned anything during his 3+ years as president, it is how to conduct damage control. Speaking to reporters the next day after his “open-mike” meeting with Medvedev, Obama made fun of his gaffe and then, turning serious, proceeded with describing missile defense as “extraordinary complex [and] very technical” issue. Given this complexity, the president argued, it would be virtually impossible to win broad consensus in Congress for any major security agreement with Russia in an election year. Deputy national security adviser Ben Rhodes in a statement re-iterated his boss’s message: “Since 2012 is an election year in both countries…it is clearly not a year in which we are going to achieve a breakthrough,” Rhodes said.

There is no doubt that Romney as the Republican presidential nominee will attempt to make Obama’s Russia policy an election issue in November. Expect images of the president cuddling with Medvedev in Seoul to be repeatedly played in TV ads produced by the Romney campaign. It is however unlikely that the “flexibility” gaffe will have any serious negative impact on Obama’s re-election prospects. Romney’s overly aggressive anti-Russian stance, including his opposition to the New START treaty, is not widely shared even among the Republicans -- and is definitely unpopular with independent voters. Besides, by recklessly calling Russia the United States’ “number one geopolitical foe,” Romney made it more difficult for himself to criticize the Obama administration’s policies toward China, Iran, and North Korea.

It is almost heartbreaking to watch how Medvedev and some Russian officials rushed to defend Obama against his GOP rival. Relax, folks! Obama is an adult and can stand for himself. If Moscow really wants to see him re-elected, it could help by immediately stopping the ridiculous anti-American campaign that by now, with the Duma and presidential campaigns concluded, has completely outlived its usefulness.

Let’s give Obama a break. Or, in his own words, space.