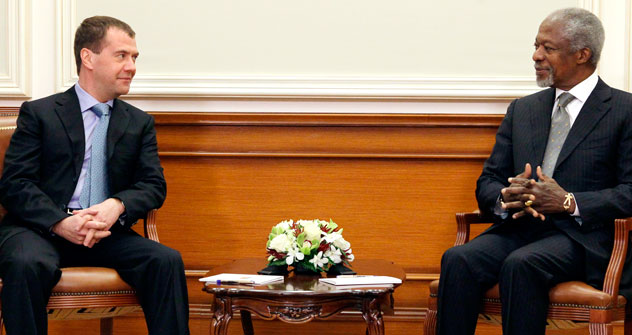 The mission to Syria of Kofi Annan as a joint special envoy of the United Nations and the Arab League, is perhaps “Syria’s last chance to avoid a long and bloody civil war,” said Russian President Dmitry Medvedev said when he met Annan in Moscow last week. These words must be seen as covering Moscow’s concern about a potential escalation of violence in Syria, despite the formal mitigation of the West’s stance on Damascus.

During his meeting with U.S. President Barack Obama during a nuclear security summit in Seoul on March 26, Medvedev continued this theme. “We must act not to cause major problems and try our best to prevent the civil war that is looming in Syria”, the Russian president said.

Obama responded by making clear the differences between the two countries on Syria.

Related: The Russian position on Syria: myths and reality

According to the U.S. president, Annan will attempt to move towards a mechanism that will allow the Syrian people ultimately “to have a representative and legitimate government.”

What was implied was the U.S.’s zero tolerance for Syrian President Bashar Assad as head of state. State Department spokeswoman Victoria Nuland said on March 22: “Clearly, our expectation is that we would not see President Assad continuing to run Syria at the end of a democratic transition process.”

Before his meeting with Medvedev, Obama discussed with Turkish Prime Minister Recep Tayyip Erdogan the possibility of providing “non-lethal” aid to Syrian rebels. The format of the aid is not as important as is Turkey’s involvement in the Syrian conundrum.

At the same time, Moscow plans to direct Annan’s attention to the inadmissibility of “external supplies” to the Syrian opposition and “support by the international community” of a single party in the Syrian conflict, according to Russian presidential aide Sergei Prikhodko.

Russia’s position does not depend on whether or not Moscow likes Bashar Assad. Russia’s Foreign Minister Sergey Lavrov has repeatedly said that he was not an advocate for the ruling regime in Damascus. Medvedev’s statement about the last chance for Syria is addressed to both sides in the conflict. What Moscow is trying to do is prevent external pressure being exerted on the political process in Syria and create conditions for Syrians to make their own choice of who will be at the helm of state.

The United States, for its part, will not withdraw its demand for Assad to step down, which dooms the efforts of intermediaries – Moscow, the Arab League and the United Nations.

During the special UN envoy’s visit to Moscow, Russia demonstrated its complete support for Annan’s plan, says Ambassador Pogos Akopov, chairman of the Association of Russian Diplomats. The situation in this Middle Eastern country will depend entirely on whether the conflicting parties are willing to come to the negotiating table, the diplomat said. “The opposition does not want to talk and this is an internal factor contributing to the situation. The external factor is that the United States openly declares its goal of having Assad removed. There will be no progress as long as the United States sticks to this position,” said Akopov, who twice headed Russian embassies in the Middle East.

The Arab League must be well aware that Assad’s political destiny is a key obstacle to resolution of the Syrian problem. Arab League Secretary General Nabil al-Araby told the media on Sunday that this week’s Arab League summit in Baghdad would not demand that President Bashar Assad step down. Asked whether there was little chance that the Arab League would call for Assad to resign office, he said: “Yes, this is true.”

The BRICS Summit, scheduled for March 28-29 in New Delhi, is also expected to declare its commitment to non-intervention by outside forces in Syrian domestic affairs and to launch  a negotiation process. Yet approaches may be different during the “Friends of Syria” meeting slated for this Sunday. It looks as if all the decisions made by the Arab League, BRICS and meeting of the “Friends of Syria” will identify a general approach to resolving the Syrian issue and Assad’s fate.